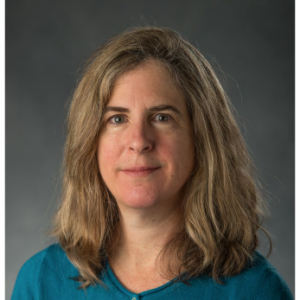 
Megan Donahue is an expert on AGN feedback in clusters and circumgalactic gas and is now president of the American Astronomical Society. 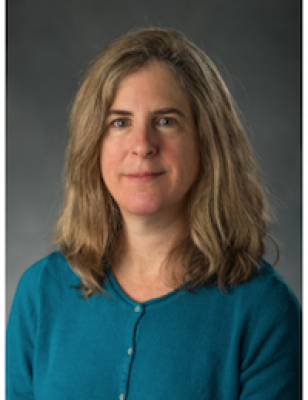 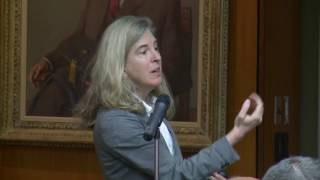 Donahue grew up on a farm near Inland, Nebraska, a town of about 60 people. She attended St Cecilia's, a small Catholic school in Hasting, Nebraska. Her undergraduate physics S.B. degree is from MIT (1985) and her astrophysics Ph.D. is from the University of Colorado, Boulder (1990). She met her husband Mark Voit, who is also an astronomer, in graduate school. Her post-doctoral research in observational astronomy was completed at the Observatories of the Carnegie Institution of Washington, in Pasadena, California and at the Space Telescope Science Institute (STScI) in Baltimore, Maryland. STScI later hired her as a staff astronomer to do research, work with the data archive team, and write science cases for the James Webb Space Telescope. In 2003, she moved to Michigan State University and re-entered academic life as a professor in the MSU Physics and Astronomy Department, in East Lansing, Michigan. She has three children, Michaela, Sebastian, and Angela.

Skygazer alert: It's super, blue and blood-colored, all at the same time

Instrumentation and Methods for Astrophysics

2015 This report describes the 2014 study by the Science Definition Team (SDT) of the Wide-Field Infrared Survey Telescope (WFIRST) mission. It is a space observatory that will address the most compelling scientific problems in dark energy, exoplanets and general astrophysics using a 2.4-m telescope with a wide-field infrared instrument and an optical coronagraph. The Astro2010 Decadal Survey recommended a Wide Field Infrared Survey Telescope as its top priority for a new large space mission. As conceived by the decadal survey, WFIRST would carry out a dark energy science program, a microlensing program to determine the demographics of exoplanets, and a general observing program utilizing its ultra wide field. In October 2012, NASA chartered a Science Definition Team (SDT) to produce, in collaboration with the WFIRST Study Office at GSFC and the Program Office at JPL, a Design Reference Mission (DRM) for an implementation of WFIRST using one of the 2.4-m, Hubble-quality telescope assemblies recently made available to NASA. This DRM builds on the work of the earlier WFIRST SDT, reported by Green et al. (2012) and the previous WFIRST-2.4 DRM, reported by Spergel et. (2013). The 2.4-m primary mirror enables a mission with greater sensitivity and higher angular resolution than the 1.3-m and 1.1-m designs considered previously, increasing both the science return of the primary surveys and the capabilities of WFIRST as a Guest Observer facility. The addition of an on-axis coronagraphic instrument to the baseline design enables imaging and spectroscopic studies of planets around nearby stars.

2012 Re-ionization of the intergalactic medium occurred in the early Universe at redshift z ≈ 6–11, following the formation of the first generation of stars1. Those young galaxies (where the bulk of stars formed) at a cosmic age of less than about 500 million years (z ≲ 10) remain largely unexplored because they are at or beyond the sensitivity limits of existing large telescopes. Understanding the properties of these galaxies is critical to identifying the source of the radiation that re-ionized the intergalactic medium. Gravitational lensing by galaxy clusters allows the detection of high-redshift galaxies fainter than what otherwise could be found in the deepest images of the sky2. Here we report multiband observations of the cluster MACS J1149+2223 that have revealed (with high probability) a gravitationally magnified galaxy from the early Universe, at a redshift of z = 9.6 ± 0.2 (that is, a cosmic age of 490 ± 15 million years, or 3.6 per cent of the age of the Universe). We estimate that it formed less than 200 million years after the Big Bang (at the 95 per cent confidence level), implying a formation redshift of ≲14. Given the small sky area that our observations cover, faint galaxies seem to be abundant at such a young cosmic age, suggesting that they may be the dominant source for the early re-ionization of the intergalactic medium.

THE CLUSTER LENSING AND SUPERNOVA SURVEY WITH HUBBLE: AN OVERVIEW

2012 The Cluster Lensing And Supernova survey with Hubble (CLASH) is a 524-orbit Multi-Cycle Treasury Program to use the gravitational lensing properties of 25 galaxy clusters to accurately constrain their mass distributions. The survey, described in detail in this paper, will definitively establish the degree of concentration of dark matter in the cluster cores, a key prediction of structure formation models. The CLASH cluster sample is larger and less biased than current samples of space-based imaging studies of clusters to similar depth, as we have minimized lensing-based selection that favors systems with overly dense cores. Specifically, 20 CLASH clusters are solely X-ray selected. The X-ray-selected clusters are massive (kT > 5 keV) and, in most cases, dynamically relaxed. Five additional clusters are included for their lensing strength (θEin > 35'' at zs = 2) to optimize the likelihood of finding highly magnified high-z (z > 7) galaxies. A total of 16 broadband filters, spanning the near-UV to near-IR, are employed for each 20-orbit campaign on each cluster. These data are used to measure precise (σ z ~ 0.02(1 + z)) photometric redshifts for newly discovered arcs. Observations of each cluster are spread over eight epochs to enable a search for Type Ia supernovae at z > 1 to improve constraints on the time dependence of the dark energy equation of state and the evolution of supernovae. We present newly re-derived X-ray luminosities, temperatures, and Fe abundances for the CLASH clusters as well as a representative source list for MACS1149.6+2223 (z = 0.544).

2002 The Sloan Digital Sky Survey (SDSS) is an imaging and spectroscopic survey that will eventually cover approximately one-quarter of the celestial sphere and collect spectra of ≈106 galaxies, 100,000 quasars, 30,000 stars, and 30,000 serendipity targets. In 2001 June, the SDSS released to the general astronomical community its early data release, roughly 462 deg2 of imaging data including almost 14 million detected objects and 54,008 follow-up spectra. The imaging data were collected in drift-scan mode in five bandpasses (u, g, r, i, and z); our 95% completeness limits for stars are 22.0, 22.2, 22.2, 21.3, and 20.5, respectively. The photometric calibration is reproducible to 5%, 3%, 3%, 3%, and 5%, respectively. The spectra are flux- and wavelength-calibrated, with 4096 pixels from 3800 to 9200 Å at R ≈ 1800. We present the means by which these data are distributed to the astronomical community, descriptions of the hardware used to obtain the data, the software used for processing the data, the measured quantities for each observed object, and an overview of the properties of this data set.

2001 A Chandra image of the central 100 kpc of the Abell 2597 cluster of galaxies shows bright irregular X-ray emission within the central dominant cluster galaxy (CDG) and two low surface brightness cavities located 30 kpc from the nucleus of the CDG. Unlike the cavities commonly seen in other clusters, the "ghost" cavities in Abell 2597 are not coincident with the bright central radio source. Instead, they appear to be associated with faint extended radio emission seen in a deep Very Large Array radio map. We interpret the ghost cavities as buoyantly rising relics of a radio outburst that occurred between 50 and 100 Myr ago. The demography of cavities in the few clusters studied thus far shows that galactic radio sources experience recurrent outbursts on an ~100 Myr timescale. Over the lifetime of a cluster, ghost cavities emerging from CDGs deposit gsim1059-1061 ergs of energy into the intracluster medium. If a significant fraction of this energy is deposited as magnetic field, it would account for the high field strengths in the cooling flow regions of clusters. The similarity between the central cooling time of the keV gas and the radio cycling timescale suggests that feedback between cooling gas and the radio source may be retarding or quenching the cooling flow.