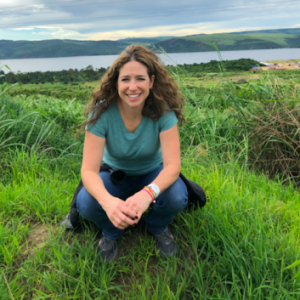 
I am a conservation social scientist building knowledge about how principles of risk affect human-environment relationships.

I am a conservation social scientist leveraging concepts of risk to enhance understanding of human-environment relationships. My scholarship is designed to build evidence for action. The majority of my scientific inquiry can be described as convergence research on conservation issues such as wildlife trafficking, illegal logging, fishing and mining.

For approximately 10 years, I was jointly appointed in the Department of Fisheries & Wildlife in the College of Agriculture and Natural Resources and School of Criminal Justice in the College of Social Science at Michigan State University; now the former is my home.

Why I am optimistic about efforts to #endwildlifecrime

Many people say the problem of illegal wildlife trade is impossible to resolve; I say it always seems impossible until it is done. In October and for the fourth time since 2014, many members of the global community working to combat the illegal wildlife trade met to talk, learn about and help resolve the problem. This time the meeting was in London.

Conservation won't work without locals on board

“Global illegal wildlife trade has increased dramatically in the last decade,” says Meredith Gore, associate professor of fisheries and wildlife at Michigan State University and lead author of the study. “Our research is the first to explore local perceptions of illegal biodiversity exploitation and environmental insecurity. Understanding local perception of policies can help predict buy-in for current and future risk-management strategies.”

Examples of the environmental injustices that Gore and her colleagues focus on include wildlife poaching in Michigan and around the world, fish fraud, illegal smuggling and trade, electronic waste, fraudulent carbon credit trading, and more. Although the poaching and smuggling of wildlife are not new concepts, globalization and technology have increased the violence in these acts.

Sharks' Bad Rap Makes Them Hard to Save

"The most important aspect of this research is that risks from — rather than to — sharks continue to dominate news coverage in large international media markets," study researcher Meredith Gore, of Michigan State University, said in a statement. "To the extent that media reflect social opinion, this is problematic for shark conservation."

The Bushmeat Supply Chain in Pointe Noire, Republic of the Congo: A Conservation Criminology Analysis

2018 Although the legal system regulates the sale and trade of wildlife and wildlife parts in the Republic of the Congo, bushmeat remains widely available in urban markets in contravention of these laws. Efforts to reduce bushmeat trafficking understandably focuses on why and under what conditions people comply with the laws and are deterred by law enforcement efforts. Requisite to delineating these law enforcement and compliance dimensions in turn requires a baseline understanding about the structure of the illegal bushmeat supply chain. This foundational information may be constructed from answers to questions such as who are the actors involved at various points in the supply chain? Where is bushmeat going? What route is it taking? Answering these questions also can help identify where the supply chain could be interrupted and audience segments that could be targeted with behavior change communication or through law enforcement outreach. Supply chain analytics further provide measurement of metrics that future projects can use to evaluate program implementation, outcomes, and impact

2017 In recent years, levels of unsustainable and illegal natural resource exploitation have escalated in scope, scale, and severity such that the issue is now firmly in the crosshairs of high‐level policymakers. Exploitation is now the dominant cause of global wildlife decline, surpassing habitat degradation, climate change, and habitat loss (McLellan, 2014). The World Wildlife Fund's 2014 Living Planet Index, which measures trends in thousands of vertebrate species, showed a 52% decline in size of populations between 1970 and 2010. Populations of freshwater species fell by a staggering 76% during this time period; marine populations dropped 39% (McLellan, 2014). Today, a wide array of government, civil society, nongovernmental, and private sector partners are collaborating and coordinating to address this problem at multiple scales.

2017 The use of wildlife and other natural resources for sustenance, clothing, trophies, and tools has historically been a fundamental part of the human cultural, economic, and ecological experience. Human populations have expanded, migrated, colonized each other, drawn and redrawn political boundaries, and built and destroyed economies. With all this political, cultural, and geographic change, the cultural views of people’s relationship with nature, their societal norms, rules, and regulations surrounding wildlife have evolved. Rules and regulations regarding who can harvest wildlife, how many, and which species can be taken hasn’t always been and in many instances still isn’t, restricted to the biological characteristics of wildlife populations. Today, in many contexts, wildlife rules and regulations have criminalized local subsistence hunting in an effort to reduce the negative effects of violent, organized, and profit driven poaching (Challendar & Cooney, 2016; Duffy, 2010). Whether in reference to the “king’s deer”(Eliason, 2012a) or a modern‐day post‐colonial African nation where big game hunting is reserved for affluent trophy hunters from foreign countries, many local people previously dependent on wildlife for food and economy are now criminalized as poachers because of revisions to local laws, national regulations, or multilateral treaties. The growing human population and exploding global economy combine with other environmental harms (eg, emerging infectious disease) to create legitimate concerns about the ability of plant and animals species to persist in the face of both legal and illegal harvest.