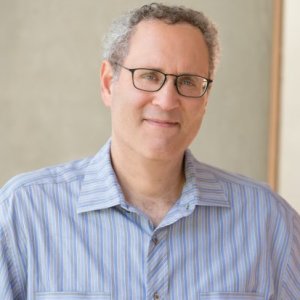 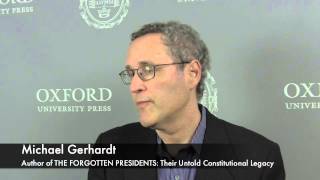 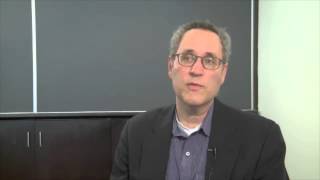 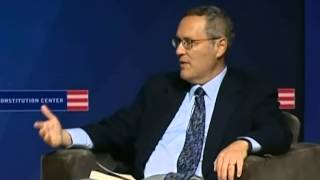 Michael Gerhardt is Samuel Ashe Distinguished Professor of Constitutional Law. He specializes in constitutional conflicts and has been active as a scholar, advisor, special counsel, expert witness, and public commentator on all the major conflicts between presidents and Congress over the past quarter century.

Professor Gerhardt has written dozens of law review articles and five books. The Financial Times selected his most recent book, The Forgotten Presidents: Their Untold Constitutional Legacy (Oxford University Press, 2013), as one of its Best Non-Fiction Books of 2013.

Professor Gerhardt frequently participates in academic workshops and colloquia around the country and regularly writes op eds and is interviewed as an expert on constitutional law by all major networks and cable television, national newspapers, and National Public Radio.

Awarded by UNC Chapel Hill Law School for the completion of an outstanding book or monograph.

Awarded by the Association of Yale Alumni.

Was it a bribe? Democrats trade 'quid pro quo' for 'bribery' in Trump impeachment messaging

In other words, experts said, it's as much about messaging as it is about the law. "Most people have a fundamental, passing awareness of what bribery is," said Michael Gerhardt, a University of North Carolina law professor who published a book last year on impeachment. "Democrats can plug into that." ...

The case for and against impeaching President Donald Trump

"The Ukraine situation encapsulates almost exactly what impeachment was created to address," said CNN legal analyst Michael Gerhardt, who was called as a nonpartisan expert witness on impeachment during the Clinton hearings. "When the Framers talked about impeachable offenses, they mentioned the President engaging in a corrupt relationship with a foreign power."...

Michael Gerhardt, Samuel Ashe Distinguished Professor in Constitutional Law and director of the Program in Law and Government, has become the first independent scholar to advise the American Law Division, a branch of the Congressional Research Service at the Library of Congress, in revising and updating the official U.S. Constitution Annotated, popularly known as CONAN ...

M. Gerhardt Interview: Who Are the Forgotten Presidents?

Michael Gerhardt from the University of North Carolina joins the National Constitution Center’s Jeffrey Rosen for an animated discussion about which Presidents should be considered “forgotten” for their constitutional legacies.

What Everyone's Getting Wrong About the President's No. 1 Job, M. Gerhardt Comments

Constitutional law experts agree, but argue that the oath of office provides some wiggle room. “If you look at the oath, it dictates the president’s constitutional obligations, but they end up being undefined,” said Michael Gerhardt, the scholar in residence at the National Constitution Center in Philadelphia. The constitution does give presidents “some discretion to say, ‘Here’s what I think my job will be.’”

2013 A week before the 2012 presidential election, I had the opportunity to speak with a former senator. I asked him about gridlock. I wondered what he would say to my law students who had lost hope in the legislative process because of the gridlock that defined the 112th Congress. He told me that they had good reason to have lost hope ...

2011 Centered on the ideology of the “Gang of 14,” Professors Gerhardt and Painter provide a critique on modern federal judicial appointments and offer suggestions for the nomination process. This essay discusses the bipartisan group of senators who joined together to control the future of judicial nominations agreeing not to support a filibuster on a nominee unless there were “extraordinary circumstances,” and the later impact of the disintegration of that group. Going forward, the authors propose streamlining the nomination process through eliminating the judicial filibuster in most circumstances and increasing transparency by compelling senators to disclose their reservations on nominees. Pointing toward the self-regulation of the political system, the authors assert that their proposal will be in accord with senatorial tradition and will ensure that nominees are treated fairly and are sufficiently vetted to make certain each jurist falls within the bounds of accepted jurisprudence...

Is the Filibuster Constitutional?

2010 In Is The Filibuster Constitutional?, Professors Josh Chafetz and Michael Gerhardt debate the constitutionality of the Senate’s cloture rules by looking to the history of those rules in the United States and elsewhere...

2006 In this essay, Michael Gerhardt examines a number of recent proposals and arguments to augment federal power to retaliate against judicial decisions federal authorities deem wrongly decided. He suggests these schemes all lack support from conventional sources of constitutional meaning and violate the independence guaranteed to the federal judiciary individually and collectively by the Constitution. This is especially true of recent arguments made by some congressional leaders and conservative scholars to support impeaching and removing federal judges for bad judicial decisions. Gerhardt demonstrates that these arguments are far from new and are merely the expressions of minority viewpoints which were rejected at the time of the Founding and repeatedly since as violating the substantive conception of judicial independence that the Constitution protects...

Why the Catholic Majority on the Supreme Court May Be Unconstitutional

2006 I agree with my fellow participants in this Symposium that the fact that the current Supreme Court has five Catholics-the most it has ever had at one time-is a positive, significant achievement for Catholics in the United States; however, I must otherwise dissent...