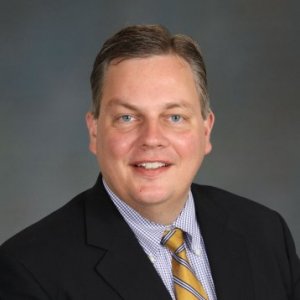 
Michael Moreland, JD, PhD, is an expert in the areas of law and religion, free speech, constitutional law and bioethics. 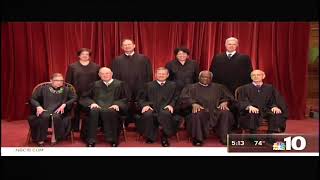 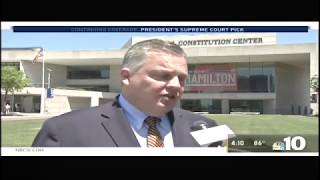 Professor Moreland is an expert on topics related to law and religion, free speech, constitutional law, tort law, and bioethics. Moreland previously served as Associate Director for Domestic Policy at the White House under President George W. Bush, where he worked on a range of legal policy issues, including criminal justice, immigration, civil rights and liability reform.

Amy Coney Barrett and the future of the Supreme Court

The Senate Judiciary Committee wrapped up confirmation hearings for Judge Amy Coney Barrett Thursday, and will be holding a vote on her nomination for next week. While Republicans praised her conservative values and accomplishments, democratic Senators pressed her for opinions around the ACA, Roe v. Wade, voting rights, and climate change. This hour, we look at the four days of proceedings and what we learned about Amy Coney Barrett and the kind of Justice she would make. We’ll also discuss how her confirmation could impact the Court and law in America. Our guests are Villanova University law professor, MICHAEL MORELAND and Temple University law professor LAURA LITTLE.

President Trump officially nominated Judge Amy Coney Barrett to replace Justice Ruth Bader Ginsburg Saturday, for a lifetime seat on the Supreme Court of the United States. For Villanova law professor Michael Moreland, watching Barrett's nomination was a thrill. That's because he knows her personally. Not only did he work with her when he was a visiting law professor at Notre Dame, but he also lived in the same neighborhood as her family. "We did a lot of carpools and soccer games, and things like that with the Barretts, and the way that she was always present to her family while at the same time managing this highly successful professional life was something that we all admired," he recalled. "One of my kids, for instance, spent a lot of time at her house and we joked at one point that we needed to pay room and board for how much time he spent over there." Moreland described Barrett as thoughtful and generous. "She's the kind of nominee that any Republican president would be proud to offer," he said. "She's a protege of Justice Scalia and Judge Silberman on the D.C. circuit, so she's obviously been shaped and mentored by a lot of conservatives." But Moreland pointed out, given the divisive times in which we live, "Understandably, there's a lot of contention right now."

Overturning the 1990 Smith precedent could have implications for future cases, such as ones where wedding vendors cite their religious convictions as a reason to decline services to LGBTQ people, said Michael Moreland, a law professor at Villanova University. “It could breathe new life into free exercise claims,” Moreland said.

Did the RNC violate the Hatch Act last night?

We spoke with Michael Moreland, a law professor at Villanova University who worked in the White House under president George W. Bush. He says senate-confirmed officials like Pompeo have less restrictions.

Michael Moreland, director of the Eleanor H. McCullen Center for Law, Religion and Public Policy at the Villanova University law school, told CNS that while the president’s ability to defer tax payments is defined in law, Trump’s action “does not cancel the obligation (of businesses) for collecting the taxes.”

Religious Employers Get Boost in Wage Cases From Supreme Court

Monday’s decision did not settle religious liberty questions that are likely to come up in future employment discrimination cases, said Michael Moreland, a law professor at Villanova University. “Parallel to this case, there are a line of cases that are being decided about religious freedom,” Moreland said.

Abortion ban aims for high court, but won’t get there soon

“You do see consistently in the chief justice’s career a willingness to go incrementally and only decide what the court needs to resolve in the case before it,” said Michael Moreland, a Villanova University law professor. Roberts also is aware of the questions the court would face if a conservative majority of justices, all appointed by Republican presidents, were to reverse the abortion decisions, Moreland said.

Michael Moreland, a professor at Villanova Law School in Pennsylvania, said he expected gun victims to face a difficult legal battle given the broad federal protection for gun manufacturers. The U.S. Supreme Court has trended toward rejecting state law claims that are barred by federal law, he said.

The back-to-back testimony of Christine Blasey Ford and Brett Kavanaugh about an alleged sexual assault before the Senate Judiciary committee yesterday has put Judge Kavanaugh’s Supreme Court nomination in jeopardy. This hour, we’ll discuss what we learned from hearings, how its playing out across the country, and the political implications. We’ll be joined by Laura Little, professor of law at Temple University School of Law, and Michael Moreland, professor of law and religion at Villanova University.

But legal experts say the grand jury report will lend new momentum to statute-reform efforts that have been percolating in Pennsylvania and beyond for years. “This will reignite these battles at the state level,” said Michael Moreland, a law professor at Villanova University, a Catholic school outside Philadelphia.

The Supreme Court announced decisions in two major cases today, and each could have significant implications down the road. In Trump v. Hawaii, more commonly known as the Trump travel ban case, the court ruled 5-4 to uphold the travel ban. In a second 5-4 decision, the court found that California could not compel pregnancy centers to provide information about abortion. We talk with legal experts about how the court reached each decision, and what the future ramifications of those decisions might be. Guests include Michael Moreland, professor of law and religion at Villanova University.

State courts could be a new battleground for groups challenging voter maps after the U.S. Supreme Court opted against intervening in a partisan gerrymandering fight in Pennsylvania … Decisions from state Supreme Courts based on state constitutions are typically insulated from U.S. Supreme Court review, Michael Moreland, a constitutional scholar at Villanova University’s Charles Widger School of Law in Villanova, Pa., told Bloomberg Law.

Institutional Conscience: From Free Exercise to Freedom of Association and Church Autonomy

The Conscience of the Institution

Assisted Ventilation of the Neonate

A Legal Revolution? The Bush Administration’s Effect on the Judiciary and Civil Justice Reform