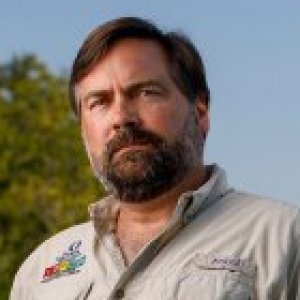 
Michael Parsons studies the causes of harmful algal blooms and how their toxins can impact marine and human lives. 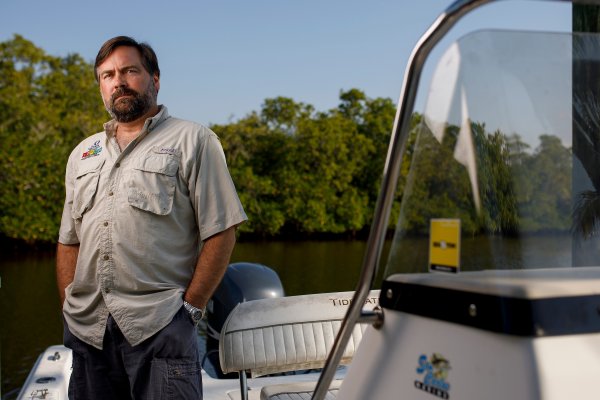 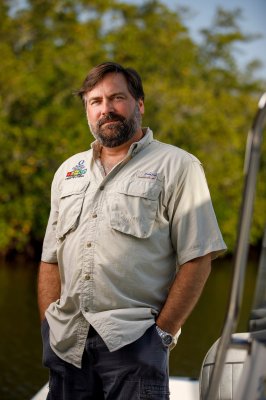 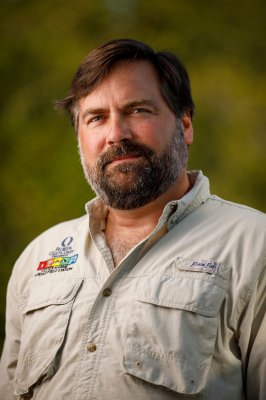 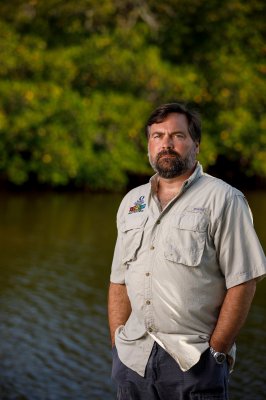 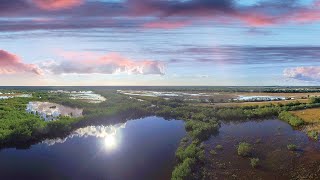 Michael Parsons is a professor of marine science at Florida Gulf Coast University and director of FGCU's Vester Marine and Environmental Science Research Field Station. He was appointed to the Blue-Green Algae Task Force by Florida Governor Ron DeSantis in 2019.

Parsons has built a successful research career, receiving over $20 million of extramural funding to study ciguatera fish poisoning, harmful algal blooms, coral reef ecology, and phytoplankton ecology, including the recently-funded Greater Caribbean Center for Ciguatera Research, funded through the Centers for Oceans and Human Health Program by the National Science Foundation and National Institutes of Health. He is also a collaborator in three Gulf of Mexico Research Initiative Consortia studying the impacts of the Macondo oil spill on coastal ecosystems in multiyear projects worth over $30 million.

At Florida Gulf Coast University, he teaches courses on marine ecology and data collection and analysis.

Michael Parsons discusses how the City of Bonita Springs is considering hiring a water steward to analyze the community's water quality.

Michael Parsons discusses a project that is studying if dead fish feed red tide and if removing them will mitigate the problem.

A rotten blame-game in Florida

Michael Parsons talks about the distinctions between different types of algal blooms, and the resultant impacts on human and marine populations.

Michael Parson's discusses the effects of the impact of natural toxins released by algae on marine ecosystems.

Michael Parsons discusses the impact of Florida's red tide on the manatee population.

Invited plenary, “Ciguatera: Will Poisoning Events Increase in the Future?”

CIGUAHAB: a regional study of ciguatera in the greater Caribbean

A simple model capable of simulating the population dynamics of Gambierdiscus, the benthic dinoflagellate responsible for ciguatera fish poisoning

Establishment of the Greater Caribbean Center for Ciguatera Research

2017 Environmental mechanisms that drive changes in phytoplankton community structure remain a remarkably understudied topic in phytoplankton ecology. For this study, two seasons and four sampling sites in the Florida Keys (FK) were selected for phytoplankton analyses to test if environmental constraints select for driving taxonomic diversity. One hundred and twenty-six taxa belonging to 10 classes and 6 phyla were identified, where significant differences in taxonomic composition and biovolume characterized the FK on spatial and temporal scales, with Bacillariophyta being the most representative phylum. A small number of taxa were limited to specific sites or seasons, whereas the majority were present at all sites and in both seasons, albeit in different densities. Canonical correspondence analysis results demonstrated that taxa are distributed along seasonal and spatial gradients defined by temperature, light and waves. The resultant variability in species composition indicates that the phytoplankton community structure is related to changing hydrodynamic conditions, temperature and light availability, which define the temporal and spatial filters for the most important phytoplankton functional groups observed in this study.

Phytoplankton and the Macondo oil spill: a comparison of the 2010 phytoplankton assemblage to baseline conditions on the Louisiana shelf

2015 The Macondo oil spill was likely the largest oil spill to ever occur in United States territorial waters. We report herein our findings comparing the available baseline phytoplankton data from coastal waters west of the Mississippi River, and samples collected monthly from the same sampling stations, during and after the oil spill (May–October, 2010). Our results indicate that overall, the phytoplankton abundance was 85% lower in 2010 versus the baseline, and that the species composition of the phytoplankton community moved towards diatoms and cyanobacteria and away from ciliates and phytoflagellates. The results of this study reaffirm the view that phytoplankton responses will vary by the seasonal timing of the oil spill and the specific composition of the spilled oil. The trophic impacts of the purported lower abundance of phytoplankton in 2010 coupled with the observed assemblage shift remain unknown.

How were phytoplankton affected by the Deepwater Horizon oil spill

2014 A literature review demonstrates that crude oil spills can affect phytoplankton, favoring the growth of some while inhibiting the growth of others. Subsequently, the phytoplankton assemblage can change as a result of exposure to crude oil. Studies of phytoplankton responses to the Macondo (Deepwater Horizon) oil spill indicate that the phytoplankton may have been stimulated by the oil spill, although the presence of low-salinity water in the region makes it difficult to discount the importance of riverine-borne nutrients as a factor. A few studies suggest that the oil spill was toxic to some phytoplankton species, whereas others indicate that the degree of tolerance to the oil or to dispersants differs among species. These results generally comply with findings of previous studies, but a lack of published field data analyses prevents further assessment of the impacts of the Deepwater Horizon oil spill on phytoplankton population dynamics in the northern Gulf of Mexico.

2013 Over 1200 samples were collected from Louisiana estuarine and coastal shelf waters between 1989 and 2002, and analyzed to examine the population dynamics of Pseudo-nitzschia and to assess the potential threat posed by domoic acid (DA), a potent neurotoxin produced by some members within this toxigenic diatom genus. Results demonstrated that three species in this region (Pseudo-nitzschia multiseries, P. pseudodelicatissima complex, P. delicatissima) produce DA, and that particulate toxin levels were highest (up to 3.05 μg L−1) during the spring bloom, while cellular concentrations were highest in the winter/early spring when P. multiseries was most abundant (up to 30 pg cell−1). These particulate toxin levels are comparable to those seen in other regions (e.g., United States west coast) where DA poisoning events have occurred in the past. Pseudo-nitzschia were most abundant under dissolved inorganic nitrogen-replete conditions coupled with lower silicate and/or phosphate concentrations, and in the early spring months when temperatures were cooler. Pseudo-nitzschia were occasionally well-represented in the phytoplankton assemblage (≥106 cells L−1 in 14% of samples, over 50% of total phytoplankton in 5% of samples), indicating that planktivores (e.g., Gulf menhaden, Brevoortia patronus) may have little choice but to consume Pseudo-nitzschia cells, thereby providing potential vectors for DA transfer to higher trophic levels. By comparison, eastern oysters (Crassostrea virginica) present in estuarine waters may be more exposed to this toxin when Pseudo-nitzschia cells are part of a mixed assemblage, reducing selective grazing by these bivalves. C. virginica may thus represent the most effective vector for DA exposure in humans.

Gambierdiscus and Ostreopsis: Reassessment of the state of knowledge of their taxonomy, geography, ecophysiology, and toxicology

2012 Of the known benthic, toxigenic microalgae, species from the genera, Gambierdiscus and Ostreopsis, present the biggest threats to human and environmental health. Gambierdiscus spp. produce gambiertoxins which are precursors of ciguatoxins, the compounds that cause ciguatera, the most prevalent, phycotoxin-related form of seafood poisoning across the globe, affecting 25,000 to 500,000 people annually. Recent Ostreopsis spp. blooms in the Mediterranean Sea and coastal waters of New Zealand have led to concerns for seafood safety due to the palytoxin analogs produced by these dinoflagellates. Recent advances in molecular genetics have demonstrated that the taxonomy of both genera were in dire need of revision. Subsequently, Gambierdiscus was revised, and efforts to do the same are ongoing for Ostreopsis. The purpose of this review, therefore, is to update the state of knowledge of these genera, with particular emphasis on the validation or dismissal of earlier findings in light of these revisions. The review is divided into four sections (taxonomy, geography, ecophysiology, and toxicology) in an effort to cover all major aspects of study of these genera. A concluding section closes the review with a synthesis of the state of knowledge on these dinoflagellates and identifies gaps as suggested areas for future research efforts.

Harmful algal blooms and eutrophication: Examples of linkages from selected coastal regions of the United States

2008 Coastal waters of the United States (U.S.) are subject to many of the major harmful algal bloom (HAB) poisoning syndromes and impacts. These include paralytic shellfish poisoning (PSP), neurotoxic shellfish poisoning (NSP), amnesic shellfish poisoning (ASP), ciguatera fish poisoning (CFP) and various other HAB phenomena such as fish kills, loss of submerged vegetation, shellfish mortalities, and widespread marine mammal mortalities. Here, the occurrences of selected HABs in a selected set of regions are described in terms of their relationship to eutrophication, illustrating a range of responses. Evidence suggestive of changes in the frequency, extent or magnitude of HABs in these areas is explored in the context of the nutrient sources underlying those blooms, both natural and anthropogenic. In some regions of the U.S., the linkages between HABs and eutrophication are clear and well documented, whereas in others, information is limited, thereby highlighting important areas for further research.