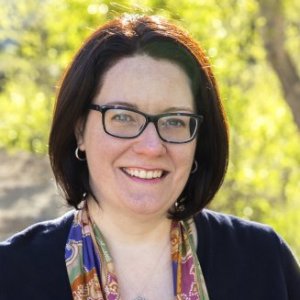 
Specializing in history lessons in pop culture, gender history in the United States, and the English revolution

Dr. Michelle Orihel is an associate professor of early American history at Southern Utah University. She often brings her research on politics and print culture into the classroom and uses contemporary popular culture like “Assassin’s Creed,” Disney’s “Pocahontas,” and “Hamilton: An American Musical” to generate students’ interest in the early American past.

Presently, she is writing a book about how the Democratic-Republican Societies, experimental political associations that formed in the mid-1790s, organized the first opposition movement to the national government in American history. In support of this research, she has received fellowships from the American Philosophical Society in Philadelphia, the International Center for Jefferson Studies at Monticello, the David Library of the American Revolution in Washington Crossing, Pennsylvania, and others. She has published articles on the memory of the English Revolution of the 1640s in "The Historian" and "The New England Quarterly." 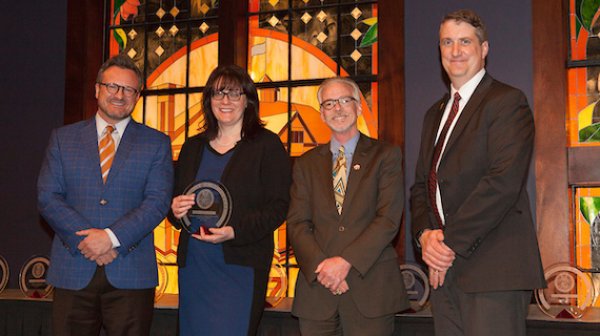 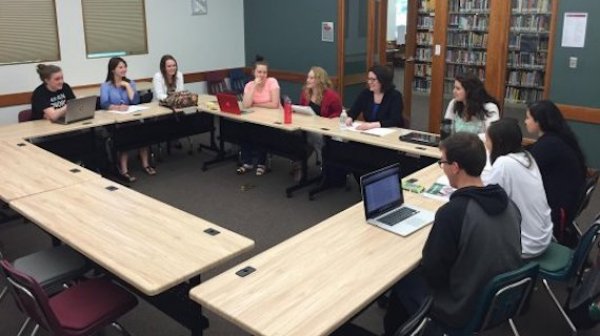 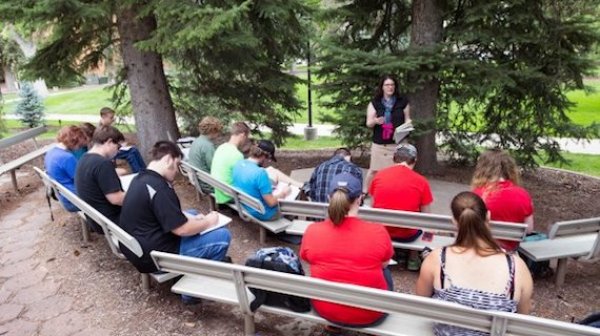 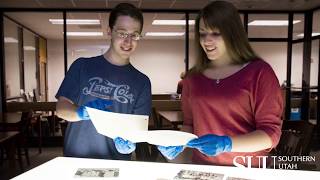 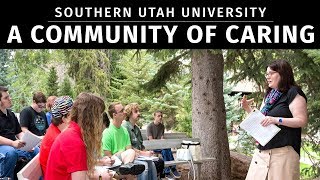 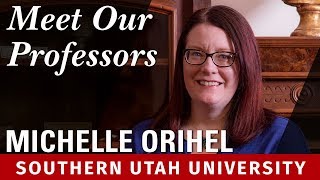 Gender History in the United States

Outstanding Educator for Diversity and Inclusion

How ‘Hamilton’ and other movies can spark a learning revolution

The multicultural cast and rap-fueled score reflects what kids are watching and listening to, which has help raise interest in the American Revolution. “That engagement helps kids connect to the stories,” says Michelle Orihel, associate professor of history at Southern Utah University, who’s shaped classes around the musical.

As an expert in Revolutionary America, it is Orihel’s purpose to engage students in the history and personal stories behind the hand-written letters and as a learning exercise, to translate the complex, historic verbiage into the medium one uses to send or receive in the world of twitters and posts today.

Look inside the twisted minds of ‘Assassins’ in American history; musical at The Beverley

Assassins, written by Stephen Sondheim and John Weidman, brings together the individuals that assassinated or attempted to assassinate former presidents of the United States. It digs into the minds of these people and explores the reasoning behind their actions.

Don’t miss your chance to see a special preview screening of PBS Great Performances documentary “Hamilton’s America,” the story behind the revolutionary musical, on Thursday at Southern Utah University. As the assistant professor of early American history at SUU, Orihel uses the hit musical to teach about the complexities of the revolution.

The Age of Jackson Podcast  online

Michelle Orihel associate professor of history at Southern Utah University, is known for her use of contemporary popular culture in class like “Assassin’s Creed,” Disney’s “Pocahontas,” and “Hamilton: An American Musical” to generate students’ interest in the early American past. She is also a fan of bringing history into the present with projects like translating the letters of John and Abigail Adams into a series of social media posts.

“A keen vision and feeling of all ordinary life”: Pandemic Journaling in the History Classroom

As monuments to everyday life, diaries enable historians to reconstruct such scenes from the daily lives of people in the past, not just prominent men who won battles or led revolutions, but ordinary men and women who did ordinary things like baking pumpkin pie.

#RememberTheLadies: Teaching the Correspondence of John and Abigail Adams in the Age of Social Media

Translating John and Abigail’s correspondence into contemporary social media posts prompted students to look outward and consider the continuities and discontinuities between past and present social media.

In an era of transatlantic revolution, the societies seized on the print media to assert the rights of man, but they did not talk about the rights of woman. Paine was their inspiration, not Wollstonecraft. Club members and leaders were all male. They belonged to a world of male sociability.

In a soap opera-worthy plot, Hamilton was being blackmailed by James Reynolds, the husband of the woman, Maria Reynolds, with whom he had an affair. An unscrupulous man, Reynolds was arrested for another scheme, and Hamilton’s payments to him attracted attention. Rumors were circulating that Hamilton had misused government funds while he was Secretary of the Treasury. His pamphlet explained the blackmail intrigue and the extra-marital affair in meticulous detail. Lin-Manuel Miranda’s inclusion of two songs about pamphlets in the musical testifies to the significance of the pamphlet as a dynamic form of political communication in the eighteenth century. Americans turned to pamphlets to attack their opponents, to defend themselves, and to argue with each other during times of crisis and controversy.

The Journal of Early American Life

Today most people’s experience with toasting is limited to weddings. Toasts have long ceased to be a significant part of our political world, but in early America the practice of politics depended heavily on sociable drinking and toasting. At festive celebrations, men and women lifted their glasses to toast all sorts of subjects, from kings and presidents to military victories, legislation, principles, and historic events. Toasts variously praised, mocked, protested, or condemned their subjects. Their performance helped to create a convivial world of free-flowing conversation and song, food, and drink. Through toasting, individuals broadcast their political affiliations to the public. They also cemented social and political relationships, forging a sense of group belonging. By the end of the eighteenth century, toasts often appeared in newspapers, the expanding social media of the time. In this way, toasts not only reflected but potentially influenced public opinion.

“Mississippi Mad”: The Democratic Society of Kentucky and the Sectional Politics of Navigation Rights.

Register of the Kentucky Historical Society

Although on the western frontier of the new American nation, Kentucky was not isolated from the revolutionary upheavals sweeping through the Atlantic world in the late eighteenth century, especially the French Revolution, which began in 1789. Kentuckians learned about events in France by reading newspapers.

A Pamphlet War In Song: Teaching Revolutionary Print Culture with the Musical, Hamilton

When I first listened to the Hamilton soundtrack last fall, the song “Farmer Refuted” caught my attention. The song stages a pamphlet war that began in November 1774 between Samuel Seabury, an Anglican minister in Westchester County, New York, and Alexander Hamilton, then an upstart New York college student. Their war of words over the First Continental Congress carried on for nearly four months and encompassed several tracts.[1] Pamphlets were the social media of the American Revolution. They gave people a place to talk, argue, complain, and gossip about current issues, particularly during times of controversy or crisis. The publication of one pamphlet sometimes prompted another pamphleteer to respond in print, which often provoked a counter-response, and another, and so forth. These pamphlet wars reflected and shaped the arguments that people had in everyday life—in their households and in taverns, coffeehouses, and other public places. If the Revolution had a soundtrack, pamphlets were it.

“All Those Truly Acquainted with the History of Those Times”: John Adams and the Opposition Politics of Revolutionary England, ca. 1640–41

In the aftermath of the Stamp Act crisis, John Adams encountered a volume of English revolutionary pamphlets from the early 1640s. By examining that volume within the context of Adams's evolving political and historical thought, this article illustrates how the puritan experience of tyranny helped to justify opposition to British imperial authority.

"Treacherous Memories”of Regicide: The Calves-Head Club in the Age of Anne

In late seventeenth-century London, rumors of calves-head clubs began to surface in print. These associations of republican incendiaries allegedly gathered every year on 30 January, the anniversary of the regicide of 1649, to celebrate "that Blessed Action in Lopping off the Head of Charles I." A typical gathering met secretly at night. Members began with a prayer of thanksgiving for the king's execution. They proceeded to stage a symbolic regicide in which they decapitated a calf, a symbol of the king. All in attendance feasted on the calves' heads or drank liquor out of the calves' skulls. The members concluded this celebration by toasting Oliver Cromwell and the other regicides, singing republican anthems in their honor.

This course is an investigation of a different foreign country each year. Emphasis is on the country’s history, culture, and its relationship with the rest of the world.

This course is an investigation of a different foreign country each year. Emphasis is on the country’s history, culture, and its relationship with the rest of the world.

This course offers a detailed social, economic and political examination of the colonial period of United States history from the earliest settlement to a study of Independence and the Constitutional convention.

A study of the New Nation, the War of 1812, the Jacksonian Era, placing special emphasis on the increasing political, social and economic democratization of the United States together with the difficulties created by change.

Students will explore how people in early America constructed notions of masculinity and femininity and how those ideas about gender shaped the lives of men and women from 1607 to 1865.

HIST 4770: The History of American Journalism

This course seeks to understand the historical origins of the modern, media-dominated culture of the United States. Topics covered include: invention of the printing press, pamphlets of the American Revolution, Abolitionist newspapers, Yellow Journalism, Political Cartooning, Muckrakers, War Correspondents, the Civil Rights Movement, the Vietnam War, Watergate, and the Digital Revolution.