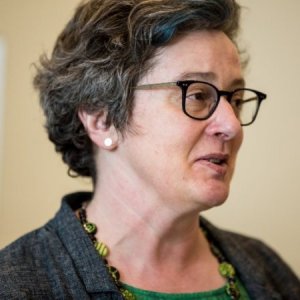 
Professor Stack's teaching and research are in the areas of university rankings, media education and educational policy.

Michelle Stack, PhD, is an associate professor, former senior policy advisor and public commentator on education. Her research interests include university rankings, the role of media in the policymaking process, using multimedia technology as part of research, community and youth engagement, social justice and equity in education. She also consults with school districts, government agencies and non-profits on equity issues.

Her primary goal is to challenge what is often seen as common sense and to integrate other ways of thinking and knowing about problems and possible solutions. To do this work, Michelle focuses on collaboration and bridging the knowledge of diverse communities including children and youth, activists, practitioners, journalists, academics and policymakers to the research process.

She has dipped her toe in standup comedy, and she is currently a student in a creative writing program.

Awarded for formal and informal teaching. I have had opportunities to teach and learn with high school students, new immigrants and refugees to Canada, undergraduate and graduate students.

While at Emory, I worked with Professor Martha Albertson Fineman on issues of equity, and developing strategies for the implementation of a vulnerability approach across government ministries, boards, agencies and commissions.

Take rankings with a grain of salt

And that's not the only problem, she says. The other is that many post-secondary institutions place too much value in these rankings for determining their own reputation.

Stack herself works at a top-ranked, highly reputable university, which is what got her interested in the issue.

Who and what gets left out of world university rankings?

I often wondered why higher education institutions became implicated in media-business rankings. The major rankings that I analysed for my book, Global University Rankings and the Mediatization of Higher Education, use indicators that tell us more about the wealth of an institution than the quality of students’ educational experience. Rankings have been part of a seismic shift in determining the mission of universities, a shift in who and what is seen as showing evidence of excellence. They play a pivotal role in the dramatic increase in higher education institutions’ spend on marketing and public relations.

Michelle Stack is a weekly columnist for the "Uncommon Sense" segment on Sense of Place with Minelle Mahtani. Topics covered include mental health, education, social justice and equity and media coverage of current issues.

Not whether to cover suicide, but how...

In the late 1990s, as a communications director for the B.C. Children’s Commission, an office that investigated child deaths, I worked with journalists covering suicide. For the most part, stories about suicide were thoughtful, although, occasionally, editors and I would disagree. In my experience, editors could be persuaded to end sensational coverage when the risk of copycat suicides was explained.

Why university rankings cause too much anxiety

A high ranking is connected with the willingness of a university to align itself with the metrics of rankers and to spend substantial dollars on marketing. This can influence which faculty are hired, what research is seen as high value and which students are seen as worthy of receiving funding. Highly ranked institutions are generally wealthier relative to others in the region, and so too are many of the students who attend them.

It might seem odd that I offer such caveats, given that I work at a top-ranked university. Don’t get me wrong. As a faculty member at UBC, I am partial to the place. I am grateful for the opportunity to work with brilliant students and colleagues.

But does this make UBC better than other public institutions in B.C.?

Social Justice and learning from each other

Studies point to connections between students having a sense of belonging, community and purpose at school and their mental well-being (Mental Health Commission of Canada, 2013; Ontario Ministry of Education, 2013; Rowling, 2009; Rowling & Weist, 2004). We used a Photovoice methodology with high school students to answer three questions: 1) How can Photovoice methods be used as a means to integrate student voice into the development of a District Code of Conduct 2) How do photographic images taken by students help us understand when students feel included versus when they feel excluded from school? 3) What recommendations can be made to create a culture of belonging in schools based on analysis of the photos? Findings of the evaluation of this Photovoice research project will inform the development of a youth-led “Belonging at Schools” project to be implemented across the district.

What Do Rankings Tell Us about Higher Education? International and Interdisciplinary Perspectives

Journalists, Policymakers and What Happens in Schools: An Analysis of the Relationship Between Journalists and Educational Policymakers

A Photovoice project that engages students in what it means to belong and how to create a sense of belonging for all students.

A Photovoice project that examines what belonging means for women who are recent immigrants and refugees to Canada.

Canada’s only national public broadcaster, the Canadian Broadcasting Corporation, has suffered from massive government cutbacks. At the same time, corporate media consolidated, which resulted in many media workers reporting for multiple sister outlets with little time to do investigative work. The consequence is coverage of education that is mainly framed through press releases provided by government and other large entities. Child and youth activism and issues of systemic injustice and marketization of education continue to be underreported, however, there is room for educators, researchers and activists to inform conversations about education.

This paper will examine the Times Higher Education's (THE) World University Rankings as a corporate media product. A number of empirical studies have critiqued the methodology of the THE, yet individuals, Higher Education Institutions (HEIs) and governments continue to use them for decision-making. This paper analyses the influence of rankings through the concepts of mediatization and visualisation. To this end, this paper will examine how media defines excellence in HEIs through rankings, and how HEIs use rankings to define themselves within a competitive educational marketplace.

Chapter in edited book - Debates for the Digital Age: The Good, the Bad, and the Ugly of our Online World (2015).

'Spin as symbolic capital: The fields of journalism and education policy- making: A Bourdieuan reading'. International Journal of Leadership in Education

How do policy‐makers and journalists accumulate symbolic capital in terms of their strategic positioning in relation to policy making? How do they negotiate their impact on policy making across fields? How do they gain access to information, and how is this information constructed in terms of education and schooling? This paper focuses on Bourdieu’s concepts of symbolic capital and field to analyse 17 interviews with former Canadian ministers of education, premiers, senior bureaucrats and journalists. This paper argues that journalism and educational policy making are separate but have structural points of convergence. The study concludes that issues of electoral and news cycles and the politics of recognition within the fields of journalism and government educational policy making are crucial to understanding what counts for common sense educational policy.