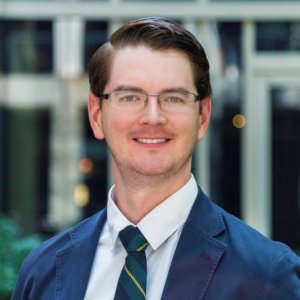 
Nathaniel Kinsey's research broadly lies in the field of nanophotonics, studying the interaction of light with materials on the nanoscale.

During his time at Purdue, he received several awards for his research contributions including the Meissner Fellowship, the Bilsland Dissertation Fellowship, and the College of Engineering Outstanding Graduate Research Award.

In the fall of 2016 Nate joined Virginia Commonwealth University as an Assistant Professor of Electrical and Computer Engineering where he now continues his studies of nanophotonics, nonlinear optics, and plasmonics while exploring their applications in new areas of technology.

The work was conducted by the research groups led by OSA Fellows Juerg Leuthold at ETH Zürich, Larry Dalton at the University of Washington, and Vladimir Shalaev and Alexandra Boltasseva at Purdue, and co-conceived by OSA members Christian Haffner of ETH Zürich and Nathaniel Kinsey of Virginia Commonwealth.

Switch controls light on a nanoscale for faster information processing

Haffner and Nathaniel Kinsey, former Purdue student and now a professor of electrical and computer engineering at Virginia Commonwealth University, along with Leuthold, Shalaev and Boltasseva, conceived the idea of a low-loss plasmon assisted electro-optic modulator for subwavelength optical devices, including compact on-chip sensing and communications technologies.

Lasers, Blu-ray players and Google cars are just a few of the technologies that operate using light waves. Specialty materials with enhanced optical properties can streamline the design of these and other devices and make them work more efficiently. With an Air Force Office of Scientific Research (AFOSR) grant, Nathaniel Kinsey, Ph.D., assistant professor in the Department of Electrical and Computer Engineering at the VCU School of Engineering, is conducting research to develop optically enhanced materials. Kinsey is using his award to study how intense light interacts with matter, a discipline called nonlinear optics. The optical response of a material usually scales linearly with the amplitude of the electric field—in Kinsey's research, the light—that is applied to it. At high intensities of light, the material properties can change rapidly and lead to interesting and useful nonlinear effects. These effects, however, are generally weak. To see how materials can be designed to elicit stronger optical responses, Kinsey and his team are studying the properties of various oxides that are engineered at the atomic level. Working layer by layer, they are adding aluminum electrons to zinc oxide, for example— a process called doping. This process creates a unique material transition within the transparent oxide. At one frequency, the doped material behaves like a metal. At another, it acts like a dielectric, a superior supporter of electrostatic fields. This effect produces a property called epsilon-near-zero (ENZ), which has been shown to enhance nonlinear optical effects. "Photons don't normally want to interact, but by enhancing the nonlinearities, we are making them do so more efficiently," Kinsey said. The benefit of these effects is greater energy efficiency in technologies including lasers and fiber optics. The oxides Kinsey is working with can be doped more than other materials, producing an ENZ property that aligns with the frequencies of light used for fiber optic communications.

A Platform for Practical Plasmonics

Materials that are compatible with standard processing techniques can be used for waveguides and modulators without sacrificing performance and functionality.

Researchers at Purdue University have developed a new kind of material that could improve the speed of optical communications by as much as 5000 times the current state of the art. The material is made of aluminum-doped zinc oxide (AZO) and it is able to change the amount of light it reflects by up to 40 percent while consuming a fraction of the power that conventional optical semiconductors consume. By reflecting more or less light, the material can encode and transmit data. What's more, this material operates in the near-infrared spectrum range, which is what is most commonly used in optical communications.

Optical transistor will be faster than CMOS devices

The team at Purdue University claim that the so-called “plasmonic oxide material” could make possible devices for optical communications that are at least 10 times faster than conventional technologies.

Researchers have created a new "plasmonic oxide material" that could make possible devices for optical communications that are at least 10 times faster than conventional technologies.

This projects aims to take advantage of the large bandwidth of optics to push the limits of communication systems. The design and fabrication of passive and active devices is exercised to explore the limits of hybrid electronic/photonic/plasmonic systems. 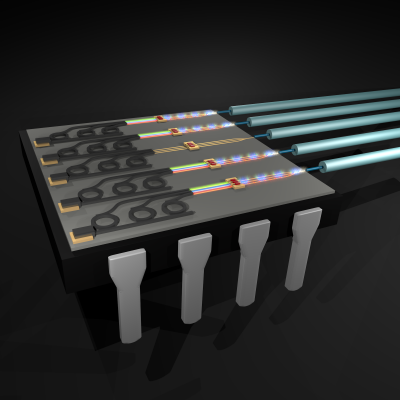 This project is focused on the study of fundamental optical nonlinearities in new materials such as the transition metal nitrides and the transparent conducting oxides. We observe ultrafast and strong effects which may be useful for developing all-optical logic and tunable/dynamic metamaterials. 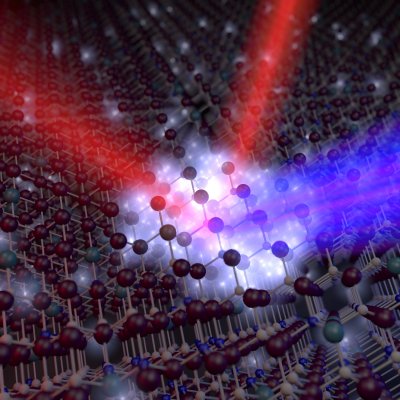 The present invention relates to a solid-state optically activated switch that may be used as limiting switch in a variety of applications or as a high voltage switch. In particular, the switch may incorporate the photoconductive properties of a semiconductor to provide the limiting function in a linear mode. In one embodiment, a configuration of the switch allows for greater than 99.9999% off-state transmission and an on-state limiting of less than 0.0001% of the incident signal.

Course Description: In this course we will cover the basics of linear optical systems and materials. We will begin with an overview of optical materials and the models used to describe their response, with an emphasis on the physical processes that give rise to these responses. Following, we will discuss the basics of linear or geometric optics, covering linear light propagation through media as well as the operational principles of specific components such as cavities, polarizers, phase plates, and interferometers. Course Contents: 1. Review of electromagnetic fields and wave propagation as well as semiconductor band theory 2. Optical coefficients: refractive index, permittivity, and linear susceptibility 3. Models of dielectric materials: Lorentz oscillator, Kramers-Kronig relations, and dispersion 4. Absorption and luminescence of materials 5. Models of metallic materials: Drude oscillator, doped semiconductors, and plasmons 6. Propagation of light in materials: Reflection, refraction, scattering 7. Geometric optics: lenses, mirrors, prisms, ABCD matrices 8. Polarization of light & devices: polarizers, dichroism, birefringence, optical activity 9. Interference of light and applications Time permitting, additional topics may include experimental optical systems (pump-probe, Michelson interferometer, ellipsometry, etc.) active optical effects (liquid crystals & modulators), ultrafast optical phenomena, Fourier optics, and/or plasmonics & metamaterials.

2015 Transparent conducting oxides have recently gained great attention as CMOS-compatible materials for applications in nanophotonics due to their low optical loss, metal-like behavior, versatile/tailorable optical properties, and established fabrication procedures. In particular, aluminum-doped zinc oxide (AZO) is very attractive because its dielectric permittivity can be engineered over a broad range in the near-IR and IR. However, despite all these beneficial features, the slow (>100  ps>100  ps) electron-hole recombination time typical of these compounds still represents a fundamental limitation impeding ultrafast optical modulation. Here we report the first epsilon-near-zero AZO thin films that simultaneously exhibit ultrafast carrier dynamics (excitation and recombination time below 1 ps) and an outstanding reflectance modulation up to 40% for very low pump fluence levels (

2016 New propagation regimes for light arise from the ability to tune the dielectric permittivity to extremely low values. Here, we demonstrate a universal approach based on the low linear permittivity values attained in the ε-near-zero (ENZ) regime for enhancing the nonlinear refractive index, which enables remarkable light-induced changes of the material properties. Experiments performed on Al-doped ZnO (AZO) thin films show a sixfold increase of the Kerr nonlinear refractive index (n2) at the ENZ wavelength, located in the 1300 nm region. This in turn leads to ultrafast light-induced refractive index changes of the order of unity, thus representing a new paradigm for nonlinear optics.

Journal of the Optical Society of America B

2015 The scaling that has governed the continual increase in density, performance, and efficiency of electronic devices is rapidly reaching its inevitable limitations. In order to sustain the trend of ever-increasing bandwidth and performance, new technologies are being considered. Among the many competitors, nanophotonic technologies are especially poised to have an impact on the field of integrated devices. Here, we examine the available technologies, both traditional photonics and plasmonics, with emphasis on the latter. A summary of the previous advances in the field of nanophotonics (interconnects and modulators), along with more recent works investigating novel and CMOS-compatible materials, are presented with a graphical comparison of their performance. We suggest that nanophotonic technologies offer key advantages for future hybrid electrophotonic devices, where the movement toward new material platforms is a precursor to high-performance, industry-ready devices.

2013 We propose several planar layouts of ultra-compact plasmonic modulators that utilize alternative plasmonic materials such as transparent conducting oxides and titanium nitride. The modulation is achieved by tuning the carrier concentration in a transparent conducting oxide layer into and out of the plasmon resonance with an applied electric field. The resonance significantly increases the absorption coefficient of the modulator, which enables larger modulation depth. We show that an extinction ratio of 46 dB/µm can be achieved, allowing for a 3-dB modulation depth in much less than one micron at the telecommunication wavelength. Our multilayer structures can be integrated with existing plasmonic and photonic waveguides as well as novel semiconductor-based hybrid photonic/electronic circuits.

Hyperbolic metamaterials (HMMs) have shown great promise in the optical and quantum communities due to their extremely large, broadband photonic density of states. This feature is a direct consequence of supporting photonic modes with unbounded k-vectors. While these materials support such high-k waves, they are intrinsically confined inside the HMM and cannot propagate into the far-field, rendering them impractical for many applications. Here, we demonstrate how the magnitude of k-vectors can be engineered as the propagating radiation passes through media of differing dispersion relations (including type II HMMs and dielectrics) in the in-plane direction. The total outcoupling efficiency of waves in the in-plane direction is shown to be on average 2 orders of magnitude better than standard out-of-plane outcoupling methods. In addition, the outcoupling can be further enhanced using a proposed tapered HMM waveguide that is fabricated using a shadowed glancing angle deposition technique; thereby proving the feasibility of the proposed device. Applications for this technique include converting high-k waves to low-k waves that can be out-coupled into free-space and creating extremely high-k waves that are quickly quenched. Most importantly, this method of in-plane outcoupling acts as a bridge through which waves can cross between the regimes of low-k waves in classical dielectric materials and the high-k waves in HMMs with strongly reduced reflective losses.

Nanophotonic devices offer an unprecedented ability to concentrate light into small volumes which can greatly increase nonlinear effects. However, traditional plasmonic materials suffer from low damage thresholds and are not compatible with standard semiconductor technology. Here we study the nonlinear optical properties in the novel refractory plasmonic material titanium nitride using the Z-scan method at 1550 nm and 780 nm. We compare the extracted nonlinear parameters for TiN with previous works on noble metals and note a similarly large nonlinear optical response. However, TiN films have been shown to exhibit a damage threshold up to an order of magnitude higher than gold films of a similar thickness, while also being robust, cost-efficient, bio- and CMOS-compatible. Together, these properties make TiN a promising material for metal-based nonlinear optics.