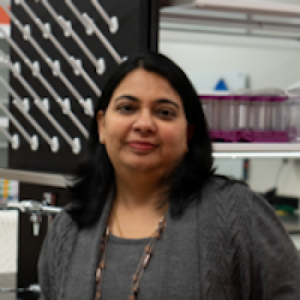 
Neera Tewari-Singh has an extensive background in molecular biology, toxicology, and medical countermeasures against chemical exposures. 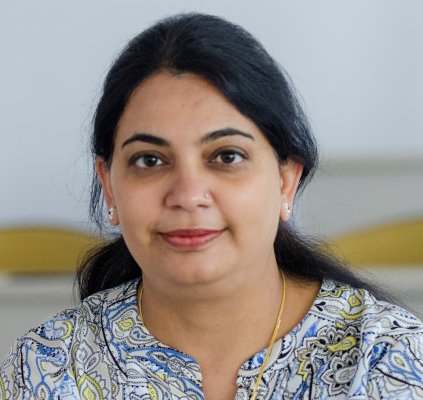 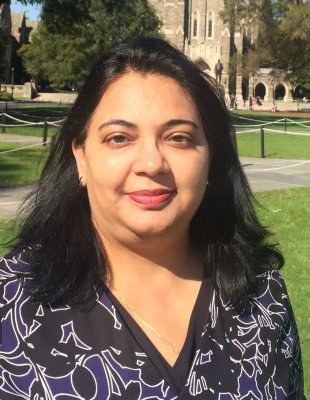 With an extensive background in molecular biology and toxicology, the long-term goal of Dr. Neera Tewari-Singh’s research is to pursue both basic and translational research to develop countermeasures/targeted therapies against the chemical threat agents and environmental exposures (including vesicating agents, urticants and corrosive agents, and polycyclic aromatic hydrocarbons) that can cause harmful effects/mass casualties as well as long-term illness to the human population. This is an important issue in the current world scenario for both civilian and military populations. Her research focus is on understanding mechanisms of toxicity and inflammation from mainly dermal and ocular exposures to chemical threat agents employing state-of-the-art molecular techniques and systems toxicology approaches. With increasing levels of technology, industrialization that could lead to occupational or accidental exposure, and possible use of chemical agents in warfare and terrorism, her work is highly significant. Additionally, she also is elucidating the mechanisms of skin and ocular wounding and inflammatory diseases, which can exacerbate due to environmental exposures and diseases like diabetes, to identify better-targeted therapies for effective treatment.

Dr. Tewari-Singh is an Assistant Professor in the Department of Pharmacology and Toxicology and an affiliated faculty at the Institute of Integrative Toxicology at Michigan State University. She received her doctorate in molecular biology and biotechnology from the School of Life Sciences, Jawaharlal Nehru University, New Delhi, and carried out her graduate research under the German Academic Exchange Service (DAAD) fellowship at the Institute of Molecular Genetics, Leibniz University Hannover, Germany. She was a postdoctoral fellow at Colorado State University and then a Research Associate, Instructor and Research Assistant Professor at the University of Colorado Denver. Tewari-Singh has an international recognition in the field of Medical Chemical Defense and is a principal investigator in National Institutes of Health’s Countermeasures Against Chemical Threats (CounterACT) program. She has extensively published her work, received numerous honors and awards including Society of Toxicology-Association of Scientists of Indian Origin Young Investigator Award in 2016, developed strong collaborations, and demonstrated leadership and service in professional societies and academic institutions.

IIT-affiliated faculty member, Neera Tewari-Singh, was recently awarded a $1.423 million U01 grant from the National Institutes of Health - Countermeasures Against Chemical Threats Program and National Institute of Arthritis and Musculoskeletal and Skin Diseases (NIAMS) for her project, "Targeted Therapeautic Approaches to Counteract Toxicity from Phosgene Oxime Skin Exposure."

A researcher at Michigan State University in East Lansing was awarded a $1.4 million grant from the National Institutes of Health Countermeasures Against Chemical Threats to find an antidote to Phosgene oxime, or CX, one of the deadliest chemical agents ever manufactured. There’s no known antidote, according to Neera Tewari-Singh, assistant professor of pharmacology and toxicology in the College of Osteopathic Medicine at MSU.

Principles of Dermal and Ocular Toxicology

Continuing Education course “Beauty of the Skin Is in the Eye of the Beholder: A Basic Course on Dermal and Ocular Toxicology,” endorsed by the Dermal Toxicology Specialty Section and the Association of Scientists of Indian Origin Special Interest Group, during the SOT 58th Annual Meeting and ToxExpo. The second talk was given by Dr. Neera Tewari-Singh from Michigan State University. Her presentation focused exclusively on dermal toxicity.

2019 Topical compositions containing silibinin with enhanced silibinin penetration into the dermis. The compositions are useful for the treatment or prevention of skin damage or disorders.

2019 Sulfur mustard (SM), a potent vesicating chemical warfare agent, and its analog nitrogen mustard (NM), are both strong bi-functional alkylating agents. Eyes, skin, and the respiratory system are the main targets of SM and NM exposure; however, ocular tissue is most sensitive, resulting in severe ocular injury. The mechanism of ocular injury from vesicating agents' exposure is not completely understood. To understand the injury mechanism from exposure to vesicating agents, NM has been previously employed in our toxicity studies on primary human corneal epithelial cells and ex vivo rabbit cornea organ culture model. In the current study, corneal toxicity from NM ocular exposure (1%) was analyzed for up to 28 days post-exposure in New Zealand White male rabbits to develop an acute corneal injury model. NM exposure led to conjunctival and eyelid swelling within a few hours after exposure, in addition to significant corneal opacity and ulceration. An increase in total corneal thickness and epithelial degradation was observed starting at day 3 post-NM exposure, which was maximal at day 14 post-exposure and did not resolve until 28 days post-exposure. There was an NM-induced increase in the number of blood vessels and inflammatory cells, and a decrease in keratocytes in the corneal stroma. NM exposure resulted in increased expression levels of cyclooxygenase-2, Interleukin-8, vascular endothelial growth factor and Matrix Metalloproteinase 9 indicating their involvement in NM-induced corneal injury. These clinical, biological, and molecular markers could be useful for the evaluation of acute corneal injury and to screen for therapies against NM- and SM-induced ocular injury.

2018 Vesicating agent, Sulfur mustard (SM), causes devastating eye injury; however, there are no effective antidotes available. Using nitrogen mustard (NM), a bi-functional analog of SM, we have earlier reported that NM-induced corneal injury in ex vivo rabbit cornea organ culture model parallels corneal injury reported with SM. Using this model, we have demonstrated the therapeutic efficacy of dexamethasone (DEX), doxycycline (DOX) and silibinin (SB) in reversing NM (2 h exposure)-induced corneal injuries when added immediately after washing NM. In the present study, we further examined the efficacy of similar/higher doses of these agents when added immediately, 2, or 4 h after washing NM following its 2 h exposure. All three treatment agents caused a reversal in established NM-induced injury biomarkers when added immediately or 2 h after washing NM following its 2 h exposure; however, when treatments were carried out 4 h after washing NM, there was no significant effect. Together, our results further show the beneficial effect of these agents in reversing NM-induced corneal injury and indicate the time window for effective treatment. This could be useful towards future development of targeted therapeutics against vesicant-induced ocular injury.

2018 Phosgene Oxime (CX, Cl2CNOH), a halogenated oxime, is a potent chemical weapon that causes immediate acute injury and systemic effects. CX, grouped together with vesicating agents, is an urticant or nettle agent with highly volatile, reactive, corrosive, and irritating vapor, and has considerably different chemical properties and toxicity compared to other vesicants. CX is absorbed quickly through clothing with faster cutaneous penetration compared to other vesicating agents causing instantaneous and severe damage. For this reason, it could be produced as a weaponized mixture with other chemical warfare agents to enhance their deleterious effects. The immediate devastating effects of CX and easy synthesis makes it a dangerous chemical with both military and terrorist potentials. Although CX is the most potent vesicating agent, it is one of the least studied chemical warfare agents and the pathophysiology as well as long term effects are largely unknown. CX exposure results in immediate pain and inflammation, and it mainly affects skin, eye and respiratory system. There are no antidotes available against CX-induced injury and the treatment is only supportive. This review summarizes existing knowledge regarding exposure, toxicity and the probable underlying mechanisms of CX compared to other important vesicants’ exposure.

Histopathological and Molecular Changes in the Rabbit Cornea From Arsenical Vesicant Lewisite Exposure.

2017 Lewisite (LEW), a potent arsenical vesicating chemical warfare agent, poses a continuous risk of accidental exposure in addition to its feared use as a terrorist weapon. Ocular tissue is exquisitely sensitive to LEW and exposure can cause devastating corneal lesions. However, detailed pathogenesis of corneal injury and related mechanisms from LEW exposure that could help identify targeted therapies are not available. Using an established consistent and efficient exposure system, we evaluated the pathophysiology of the corneal injury in New Zealand white rabbits following LEW vapor exposure (at 0.2 mg/L dose) for 2.5 and 7.5 min, for up to 28 day post-exposure. LEW led to an increase in total corneal thickness starting at day 1 post-exposure and epithelial degradation starting at day 3 post-exposure, with maximal effect at day 7 postexposure followed by recovery at later time points. LEW also led to an increase in the number of blood vessels and inflammatory cells but a decrease in keratocytes with optimal effects at day 7 postexposure. A significant increase in epithelial-stromal separation was observed at days 7 and 14 post 7.5 min LEW exposure. LEW also caused an increase in the expression levels of cyclooxygenase-2, IL-8, vascular endothelial growth factor, and matrix metalloproteinase-9 at all the study time points indicating their involvement in LEW-induced inflammation, vesication, and neovascularization. The outcomes here provide valuable LEW-induced corneal injury endpoints at both lower and higher exposure durations in a relevant model system, which will be helpful to identify and screen therapies against LEW-induced corneal injury.

2017 Phosgene Oxime (CX), an urticant or nettle agent categorized as a vesicant, is a potential chemical warfare and terrorist weapon. Its exposure can result in widespread and devastating effects including high mortality due to its fast penetration and ability to cause immediate severe cutaneous injury. It is one of the least studied chemical warfare agents with no effective therapy available. Thus, our goal was to examine the acute effects of CX following its cutaneous exposure in SKH-1 hairless mice to help establish a relevant injury model. Results from our study show that topical cutaneous exposure to CX vapor causes blanching of exposed skin with an erythematous ring, necrosis, edema, mild urticaria and erythema within minutes after exposure out to 8h post-exposure. These clinical skin manifestations were accompanied with increases in skin thickness, apoptotic cell death, mast cell degranulation, myeloperoxidase activity indicating neutrophil infiltration, p53 phosphorylation and accumulation, and an increase in COX-2 and TNFα levels. Topical CX-exposure also resulted in the dilatation of the peripheral vessels with a robust increase in RBCs in vessels of the liver, spleen, kidney, lungs and heart tissues. These events could cause a drop in blood pressure leading to shock, hypoxia and death. Together, this is the first report on effects of CX cutaneous exposure, which could help design further comprehensive studies evaluating the acute and chronic skin injuries from CX topical exposure and elucidate the related mechanism of action to aid in the identification of therapeutic targets and mitigation of injury.