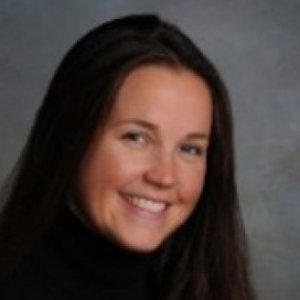 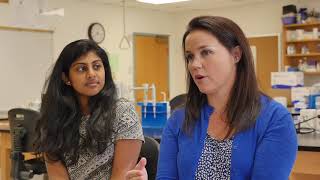 For Associate Professor of Chemistry Nicole Crowder, the solution to some of the world’s toughest challenges might come from a few molecules.

She is working with undergraduate students on projects aimed at reducing carbon dioxide through manipulating various substances. “It’s about taking something that is viewed as a waste gas and turning it into something useful,” Dr. Crowder said.

Research in this area can have large potential implications, from turning carbon dioxide into alternate fuel sources to finding ways to remove the gas from the atmosphere. If the research of chemists advances, it could change the way scientists combat climate change in the next decade.

She is an expert on inorganic chemistry, as well as biomedical implant applications, and has been instrumental in coordinating a Jepson Scholars science initiative at UMW, funded by the National Science Foundation, that addresses financial burdens and enhances the undergraduate experience for academically talented students interested in pursuing a major in biological sciences, chemistry, Earth and environmental sciences, or physics.

2008 Rapid implant fixation could prove beneficial in a host of clinical applications from total joint arthroplasty to trauma. We hypothesized that a novel self‐assembled monolayer of phosphonate molecules (SAMP) covalently bonded to the oxide surface of titanium alloy would enhance bony integration. Beaded metallic rods were treated with one of three coatings: SAMP, SAMP + RGD peptide, or hydroxyapatite. Rods were inserted retrogradely into both distal femurs of 60 rabbits. Fifteen rabbits were sacrificed at 2, 4, 8, and 16 weeks. At each time, seven specimens for mechanical pull‐out testing and three for histomorphometric analysis were available for each coating. At four weeks, both SAMP groups had significantly higher failure loads when compared to hydroxyapatite (p < 0.01). No significant differences were found among groups at other times, though the SAMP‐alone group remained stronger at 16 weeks. Histology showed abundant new bone formation around all the three groups, though more enhanced formation was apparent in the two SAMP groups. With this novel treatment, with or without RGD, the failure load of implants doubled in half the time as compared with hydroxyapatite. Where early implant fixation is important, the SAMP treatment provides a simple, cost‐effective enhancement to bony integration of orthopaedic implants.

Self-assembled Monolayer Films of Phosphonates for Bonding RGD to Titanium

2008 Modification of the implant surface with the Arg-Gly-Asp tripeptide (RGD) putatively facilitates osteoblast attachment for improved implant fixation in the laboratory. We compared the histomorphometric and mechanical performance of titanium implants coated with RGD using a novel interface of self-assembled monolayers of phosphonates (RGD/SAMP) and implants coated with RGD using the more conventional thiolate-gold interface (RGD/thiolate-gold). We hypothesized RGD/SAMP-coated implants would show greater bone ongrowth and implant fixation than RGD/thiolate-gold-coated ones. We implanted an RGD/SAMP-coated implant in one femur and an RGD/thiolate-gold-coated in the contralateral femur of 60 rats. At 2, 4, and 8 weeks after implantation, 10 rats were sacrificed for histologic evaluation and another 10 for biomechanical testing. Bone-implant ongrowth and implant force-to-failure of the two implants were similar at all times. Although RGD/SAMP-coated implants did not show superior bone ongrowth and implant fixation, RGD/SAMP-coated implants have at least equally good histomorphometric and mechanical in vivo performance as RGD/thiolate-gold-coated ones. Additional in vivo characterization of self-assembled monolayer films of phosphonates as interface to bond RGD to titanium is needed to explore its full potential and seems justified based on the results of this study.

Synthesis of Pt(dpk)Cl4 and the Reversible Hydration to Pt(dpk-O-OH)Cl3·H-phenCl:  X-ray, Spectroscopic, and Electrochemical Characterization

2004 A novel Pt(IV) compound, [Pt(dpk)-phenCl4], has been synthesized, which is stable also as the hydrated form, [Pt(dpk-O-OH)Cl3]·HCl. X-ray crystallographic, UV−visible, and IR spectral characterization were conducted, as were solubility studies and preliminary electrochemical investigations.