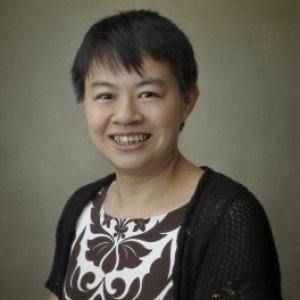 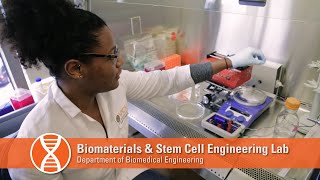 Awarded by the National Science Foundation.

Presented by the Clemson University Board of Trustees.

Presented by the Walter Coulter Foundation.

2013 Polymer nanofibers are favorable for tissue engineering scaffolds because of their high surface-to-volume ratio and biomimicry of the extracellular matrix. Random and uniaxially oriented polymer nanofibers are easily fabricated by conventional electrospinning techniques; however, control over fiber organization within nanofiber structures is limited when they are collected directly from an electrospinning jet. The regenerative medicine applications of electrospun scaffolds could be expanded by developing assembly methods that allow better control of fiber organization. Here, a novel technique is presented that utilizes parallel automated tracks to orient and collect nanofibers from an electrospinning jet. The stabilized fibers are then subsequently assembled into desirable structures. It is difficult to assemble complex structures directly from an electrospinning jet because of high electrical charge and velocities, so this technology adds an intermediate step where nanofibers are immobilized on automated tracks. The result is a continuous steady-state delivery of static stabilized nanofibers that provides a unique and promising platform for automated post processing into useful nanofiber structures. This technique also allows for an indefinite amount of time, as determined by design parameters, for fibers to dry or cool before they contact other nanofibers in the collection site, thus eliminating potential for fiber-to-fiber adhesions even with slow evaporating solvents or high-temperature melts. To demonstrate potential in regenerative medicine applications, several nanofiber structures were fabricated, including: 2D structures with well-controlled fiber density; 3D loosely assembled aligned nanofiber structures with good cell penetration properties; and, complex layer-by-layer 3D aligned fiber structures assembled by integration with post-processing techniques.

2012 Neural stem-cell transplantation is a promising strategy for the treatment of neural diseases and injuries, since the central nervous system (CNS) has a very limited capacity to repopulate the lost cells. Transplantation strategies face many difficulties including low viability, lack of control of stem-cell fate, and low levels of cell engraftment after transplantation. An alternative strategy for CNS repair without transplantation is using endogenous neural stem cells (NSCs) and precursor cells. Hepatocyte growth factor (HGF), a pleiotropic cytokine of mesenchymal origin, exerts a strong chemoattractive effect on stem cells. Leukemia inhibitory factor (LIF), a key regulator for stem-cell proliferation, mobilization, and fate choices, is currently being characterized for endogenous NSC manipulation for brain regeneration. In this study, HGF and LIF have been loaded into hydrogels and degradable nanoparticles, respectively, for sustained, long-term, localized delivery. We examine the use of HGF-loaded hydrogels and LIF-loaded nanoparticles for manipulating migration and mobilization of human NSCs in vitro. The combination of LIF-loaded nanoparticles and HGF-loaded hydrogels significantly mobilized hNSCs and promoted their migration in vitro. Studies are in progress to evaluate endogenous NSC mobilization and migration in vivo with simultaneous, controlled delivery of LIF at the natural reservoir of endogenous NSCs and HGF at the injury or disease site for in situ tissue regeneration.