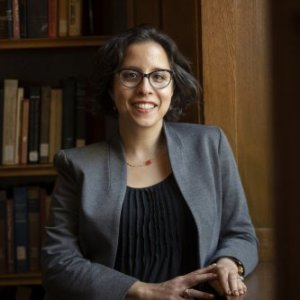 
Rubel is an expert in Jewish studies, as well as Jewish food and holidays 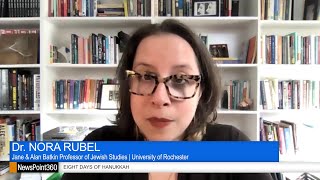 She is working on a book titled "Recipes for the Melting Pot: Reading The Settlement Cook Book," under contract with Columbia University Press.

It's a fitting side project for Nora Rubel, a Jewish studies professor at the University of Rochester who studies food, culture and ethnicity.

Nora Rubel at the University of Rochester says you find recipes with horseradish in the earliest American Jewish cookbooks.

Unpacking the Immense Popularity of Shtisel

Last Wednesday, Gady Levy, the executive director of the Streicker Center at New York’s Temple Emanu-El, herded the Israeli actors Neta Riskin and Dov Glickman through the cavernous synagogue’s hallways. Riskin and Glickman, who play the daughter-father pair Giti and Shulem on the Israeli television show Shtisel, had just left a room jammed with donors waiting to get their picture taken with their favorite characters. Downstairs, another group was awaiting its photo-op. Outside the building, the line for the main event—a panel discussion with the actors—took up an entire block on Fifth Avenue and curled halfway down both 65th and 66th Streets. Still, it’s telling that so many American Jews are eager to find universality in a form of particularity that, in the past, they found deeply unpleasant. In her 2009 book, Doubting the Devout: The Ultra-Orthodox in the Jewish American Imagination, the University of Rochester’s Nora Rubel notes that haredim have often been a “source of anxiety and embarrassment for ‘modern’ Jews.”

Talk of the Table | The Foods of Passovers Past

Younger generations’ cluelessness is easy fodder for the outraged defenders of beloved Passover dishes. But it’s always been true that, as tastes change and new ingredients proliferate, popular holiday recipes fade into obscurity. Looking through mid-century cookbooks, Nora Rubel, a Jewish studies professor at the University of Rochester, discovered recipes for several Passover desserts, such as chremslach, a fried matzah pancake (or “glorified latkes,” as one of the recipes describes them) and charlotte. A European dish, charlotte is a type of Passover cake, “often lumped in the same category as a kugel,” although it looks more like a trifle, says Rubel. “That’s one thing that shows up everywhere that I don’t think anyone I know has ever made—or had.” She has found recipes for matzah charlotte, farfel charlotte, apple charlotte and was particularly intrigued by fruit meringue charlotte, made of matzah farfel, prune or apple juice, lemon juice, grated lemon rind, melted shortening, eggs, salt, sugar, chopped nuts and sliced bananas or apples.

Connections: Discussing Ashkenazi Jewish food with the authors of the "The Gefilte Manifesto"

Connections: Discussing the psychology and impact of hate and intolerance

According to several recent reports, hate crimes and violent incidents motivated by bigotry are on the rise. In November, the FBI released a report that showed hate crimes in the U.S. increased 17 percent in 2017, with anti-Semitic crimes spiking at 37 percent. This hour, we have a conversation about the impact of hate and intolerance with local professors who have studied the subject. We discuss recent incidents of hate, lessons from history, and the psychology of stereotypes and intolerance. Our guests: Nora Rubel, the Jane and Alan Batkin Professor of Jewish Studies and chair of the Department of Religion and Classics at the University of Rochester Laura Elenbaas, assistant professor of psychology at the University of Rochester Thomas Fleischman, assistant professor of history at the University of Rochester

Hate and Violence on the Rise: Is history repeating itself? 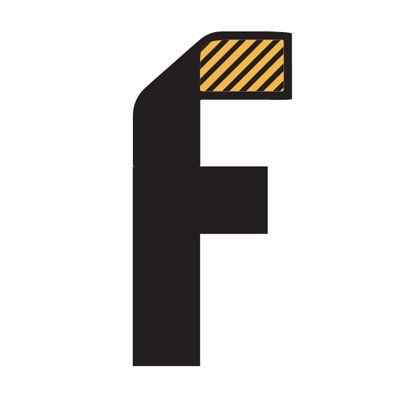 Yom Kippur: A time for feasting as well as fasting

But whether or not one fasts on Yom Kippur, the tradition has developed over just the last few decades, according to scholar Nora Rubel, of a lavish, festive meal at the conclusion of the fast...

How Yom Kippur Fasts Became All About The Feasts

According to University of Rochester religion professor Nora Rubel, there's one problem with this idea of celebrating around a laden table: For Jews of Eastern European background, the table-groaning Yom Kippur break fast feast is a relatively recent development...

Nora Rubel is Jewish and her husband, Robert Nipe, was raised Presbyterian. Earlier in their marriage Rubel struggled over whether or not to have a Christmas tree in their Brighton home when her mother, whom she says is her “biggest critic,” suggested that she should do it to please her husband, especially since “he was bending over backwards” and agreeing to raise their two daughters (now ages 8 and 12) in the Jewish faith. “I was relieved,” says Rubel...

‘You can’t make a Yankee of me that way!’ The Settlement Cook Book and Culinary Pluralism in Progressive-Era America

2018 Mary Antin, in her 1912 seminal immigrant autobiography The Promised Land, wrote about her mother’s cheesecake in Polotzk, extolling the virtues of both the cake and its accompanying nostalgia...

The Feast at the End of the Fast: The Evolution of an American Jewish Ritual

Tastes of Faith: Jewish Eating in the United States

2009 I have used this introductory exercise on the first day of class in two courses: “Race, Religion, and Ethnicity in America” and “Religion in America.”