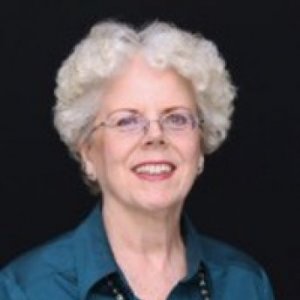 
Patricia Mokhtarian has specialized in the application of quantitative methods to the study of travel behavior for more than 30 years. 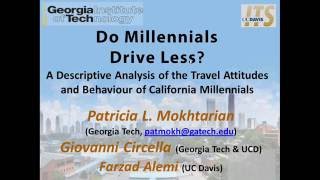 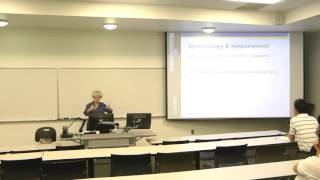 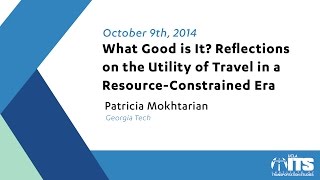 Patricia Mokhtarian joined our School in Fall 2013 semester from University of California-Davis, where she was a professor of Civil and Environmental Engineering, associate director of the Institute of Transportation Studies, and founding chair of the interdisciplinary MS/PhD program in Transportation Technology and Policy. Prior to joining the UC Davis faculty in 1990, she worked for several years in regional planning and consulting in Southern California. Dr. Mokhtarian has specialized in the study of travel behavior for more than 30 years, and has authored or co-authored more than 200 refereed journal articles, technical reports, and other publications. She is a North American area editor of the journal Transportation, and is on the editorial boards of Transportation Research Part A, Transport Policy, Transportation Letters, the International Journal of Sustainable Transportation, the European Journal of Transport and Infrastructure Research, and Travel Behaviour and Society .

Commuters' Responses to Congestion or to System Disruptions

The Need to Travel for Its Own Sake

Impacts of Land Use on Travel

Impacts of Telecommunication on Travel

Multitasking Attitudes and Behavior During Travel

How Will the Growing Popularity of Telecommuting Impact Public Transit?

Patricia Mokhtarian, a Georgia Tech professor who studies travel behavior and telecommuting, warns of other negative potential consequences. Given the option to work from home, some may opt to live further away from their jobs, leading to longer commutes when they do drive to the office. Telecommuting might also result in more air travel and its high carbon footprint. “I would advocate promotion of telecommuting,” Mokhtarian says, “but I would be clear-eyed on the likely transportation impacts.”

It’s not all fun and games: An investigation of the reported benefits and disadvantages of conducting activities while commuting

2019 Travel-based multitasking, or the performance of activities while traveling, is more feasible than ever before, as the expanding availability of shared ride services and increasing vehicle automation coincide with the ubiquity of portable information and communication technology devices. However, the question of whether, and if so, how these increasingly blurred boundaries between activities are truly helping rather than hurting us is not presently well-understood. Using an attitudinally-rich travel survey of Northern California commuters (N ≈ 2500), we develop a conceptual and empirically-based framework for studying benefits and disadvantages of travel-based multitasking. Through latent variable models of reported benefits and disadvantages of activities conducted on a recent commute, we identify constructs associated with hedonic and productive benefits, and with affective and cognitive disadvantages. This empirically-developed framework informs the definition of binary variables indicating the presence/absence of each construct for a given traveler on the commute in question. We then present two bivariate binary probit models that examine the effects of person and trip attributes such as personality traits, chosen mode, commute preferences, and activities conducted while traveling on the presence of those benefits and disadvantages, respectively. Notably, we find evidence that conditions/activities that may facilitate multitasking benefits can also simultaneously yield disadvantages; for example, several activities – conspicuously including talking on or otherwise using a phone – increase the probability of receiving benefits while also increasing the probability of experiencing cognitive disadvantages. This finding resonates with the general multitasking literature, and empirically corroborates the suggestion that travel-based multitasking may not uniformly increase trip utility.

2019 Non-motorized travel modes, particularly cycling, are experiencing a resurgence in many United States (U.S.) states as well as in other countries. Still, most studies focus on bicyclists’ behaviors in areas with strong bicycling cultures. This paper discusses the findings of a survey (N = 1,178) deployed in six communities in Alabama and Tennessee, U.S., where cycling is not (yet) popular nor widely adopted. The analysis includes linear regression models built on respondents’ reactions to images of bicycling infrastructure and their perceptions of being comfortable, safe, and willing to try cycling on the displayed roadway type. Findings indicate a preference for more separated bicycle infrastructure types along with options that exclude on-street parking. Segmented models indicate that, compared with potential cyclists, the preferences of regular utilitarian cyclists can vary more than those of recreational/occasional cyclists. Results from this study provide useful insights into ways to maximize the return on investments, and design bike infrastructure that can attract patronage and be most successful in areas lacking a substantial bicycling population.

2019 From early studies of time allocation onward, it has been acknowledged that the “productive” nature of travel could affect its utility. Currently, at the margin an individual may choose transit over a shorter automobile trip, if thereby she is able to use the travel time more productively. On the other hand, recent advancements toward partly/fully automated vehicles are poised to revolutionize the perception and utilization of travel time in cars, and are further blurring the role of travel as a crisp transition between location-based activities. To quantify these effects, we created and administered a survey to measure travel multitasking attitudes and behaviors, together with general attitudes, mode-specific perceptions, and standard socioeconomic traits (N = 2229 Northern California commuters). In this paper, we present a revealed preference mode choice model that accounts for the impact of multitasking attitudes and behavior on the utility of various alternatives. We find that the propensity to engage in productive activities on the commute, operationalized as using a laptop/tablet, significantly influences utility and accounts for a small but non-trivial portion of the current mode shares. For example, the model estimates that commuter rail, transit, and car/vanpool shares would respectively be 0.11, 0.23, and 1.18 percentage points lower, and the drive-alone share 1.49 percentage points higher, if the option to use a laptop or tablet while commuting were not available. Conversely, in a hypothetical autonomous vehicles scenario, where the car would allow a high level of engagement in productive activities, the drive-alone share would increase by 1.48 percentage points. The results empirically demonstrate the potential of a multitasking propensity to reduce the disutility of travel time. Further, the methodology can be generalized to account for other properties of autonomous vehicles, among other applications.

1997 This study examined the effects of land use and attitudinal characteristics on travel behavior for five diverse San Francisco Bay Area neighborhoods. First, socio-economic and neighborhood characteristics were regressed against number and proportion of trips by various modes. The best models for each measure of travel behavior confirmed that neighborhood characteristics add significant explanatory power when socio-economic differences are controlled for. Specifically, measures of residential density, public transit accessibility, mixed land use, and the presence of sidewalks are significantly associated with trip generation by mode and modal split. Second, 39 attitude statements relating to urban life were factor analyzed into eight factors: pro-environment, pro-transit, suburbanite, automotive mobility, time pressure, urban villager, TCM, and workaholic. Scores on these factors were introduced into the six best models discussed above. The relative contributions of the socio-economic, neighborhood, and attitudinal blocks of variables were assessed. While each block of variables offers some significant explanatory power to the models, the attitudinal variables explained the highest proportion of the variation in the data. The finding that attitudes are more strongly associated with travel than are land use characteristics suggests that land use policies promoting higher densities and mixtures may not alter travel demand materially unless residents' attitudes are also changed.

Examining the impacts of residential self‐selection on travel behaviour: a focus on empirical findings

2009 Numerous studies have found that suburban residents drive more and walk less than residents in traditional neighbourhoods. What is less well understood is the extent to which the observed patterns of travel behaviour can be attributed to the residential built environment (BE) itself, as opposed to attitude‐induced residential self‐selection. To date, most studies addressing this self‐selection issue fall into nine methodological categories: direct questioning, statistical control, instrumental variables, sample selection, propensity score, joint discrete choice models, structural equations models, mutually dependent discrete choice models and longitudinal designs. This paper reviews 38 empirical studies using these approaches. Virtually all of the studies reviewed found a statistically significant influence of the BE remaining after self‐selection was accounted for. However, the practical importance of that influence was seldom assessed. Although time and resource limitations are recognized, we recommend usage of longitudinal structural equations modelling with control groups, a design which is strong with respect to all causality requisites.