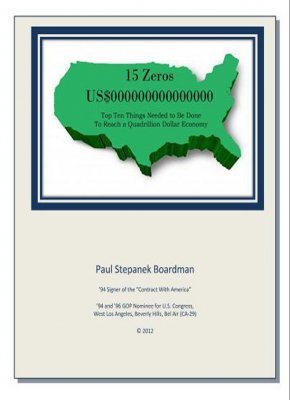 Paul S. Boardman is a speaker, author, and practitioner providing leadership toward economic growth by providing fundraising, marketing, government affairs, economic development and business development services in both the public sector and private sector. Whether marketing new innovative products to the federal government and businesses to save funds or to save lives in combat theater, Paul works to make that difference.

Currently, Paul is the CEO of IG Company, the Managing Director of Economic Surge Corporation [a 501 (c) 4 non-profit corporation], and Chairman of America is Great PAC. Paul is also the author of the book “Quadrillion $ Economy”.

A former nominee for the U.S. House of Representatives in West Los Angeles California's 29th district and "Contract with America" co-signer, Paul won contested primaries with 78% of the vote in 1994 and 82% of the vote in 1996. Among his many notable achievements, Paul was instrumental in developing the anti-violence in the media rating system, and led a disease prevention and control task force.

IG Company is an organization with lines of business, projects and initiatives both in the public and private sectors dedicated to economic growth. IG (or Infuse Growth) provides economic growth services in the public and private sector ranging from economic development – site location, strategy and business planning to marketing, business development and government affairs – all with the same mission – Infuse Growth.

Quadrillion $ Economy is a new look at deploying conservative economic financial fundamentals specific to an economic surge. The book is outlined in a 193-page TOP TEN TRILLION format to easily explain how conservative fundamental economic policy will launch an American led economic surge that enhances the quality of life.

Economic Surge Corporation (ESC) is committed to research and initiatives which educate people & organizations pertaining to growth infusion, and subsequent economic development. ESC supports getting the government out of the way of free markets and incentivizing U.S. government policies that infuse growth and assist in creating an economic surge.

This presentation will provide an overview of technology transfer tax credits (TTTCs), which have the potential of bringing millions of entrepreneurs into the market to lease, buy and sell intellectual property. Innovation parks and business incubators are springing up all over the United States, creating new investments and jobs. TTTCs can incentivize millions of these entrepreneurs and surge the United States toward a quadrillion dollar economy.