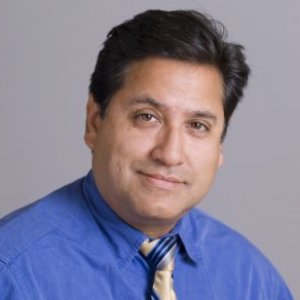 
An award-winning investigative journalist with expertise in reporting issues of race and poverty, especially in the American South.

Paul Cuadros is an award-winning investigative reporter and author whose work has appeared in The New York Times, The Huffington Post, Time magazine, Salon.com, The Chicago Reporter, and other national and local publications. He joined the school in 2007.

For the past 20 years, Cuadros has focused his reporting on issues of race and poverty in America. In 1999, he won a fellowship with the Alicia Patterson Foundation, sponsored by New York Newsday and considered one of the most prestigious fellowships in journalism, to report on emerging Latino communities in rural poultry-processing towns in the South. The culmination of his reporting was his book, “A Home on the Field: How One Championship Team Inspires Hope for the Revival of Small Town America,” which tells the story of Siler City, N.C., as it copes and struggles with Latino immigration through the lives of a predominantly Latino high school soccer team.

“A Home on the Field” was the summer reading selection at UNC in 2009. He is the only faculty member at UNC to have his book selected as summer reading. The book has been chosen for summer reading programs at other universities in North Carolina and beyond.

Cuadros is a co-recipient of the 2006 Alfred I. duPont-Columbia Journalism Award, Team Award, for his contribution to the radio series “North Carolina Voices: Understanding Poverty” broadcast on WUNC-FM. He has won the National Association of Hispanic Journalist’s award for online reporting, and he won the UNC Diversity Award in 2012 for his work on campus opening doors for minority students, faculty and staff.

Cuadros serves as the chair and executive director of the UNC Scholars’ Latino Initiative, a three-year mentoring and college preparatory program between UNC students and Latino high school students at six area high schools. The program has more than 150 students and is housed at the Center for Global Initiatives. Cuadros is also the co-founder of the Carolina Latina/o Collaborative, which is the Latino educational and cultural center at UNC. He is also co-founder of the Latina/o Caucus, a university coalition of faculty and staff on campus that advocates for Latino interests at the university.

Cuadros is involved in a documentary film production and episodic series for Nuyorican Productions Inc. that is based on his book and chronicles the lives of Latino youth on the soccer team he coaches in Siler City.

He is working on his second book on migration.

Provided insight and news opinion on a variety of campaign issues as one of a select group of state influencers.

Recognized for work with diverse groups and students at UNC Chapel Hill.

Awarded for the radio series "North Carolina Voices, Understanding Poverty" on WUNC-FM. "Dreamland" was his story in the series and told the story of undocumented students’ attempts at higher education.

Here’s what you wanted us to ask NC leaders about immigration, and their responses

“Yes. Recipients of DACA, who were brought here unauthorized as children without their knowledge or consent, have been granted by the United States a special status that protects them from deportation and allows them to live in the country. To become eligible for DACA status, recipients have passed an FBI background check, had biometric information provided to the FBI, other personal information gathered, and gone through all the steps of the program to qualify. The program is seen as a bridge to allow recipients to live in the only country they have known until Congress can decide on how it wants to further process these individuals. Recipients are among the best and brightest in many communities, and complied with all laws and regulations the US has demanded of them, and have tremendous promise for productive and contributing lives in the US...."

Paul Cuadros, executive director of the UNC Scholars’ Latino Initiative, said Americans are divided because the country is changing and that creates anxiety. "Our leaders can do a lot to create better ties of fellowship and common interest but right now our leaders and other entities profit off of division," Cuadros wrote. "We need leaders who can identify this issue and begin to create more unity in our state and country."

Groups protest outside Case Farms for right to use bathroom

Paul Cuadros, an associate professor of journalism at UNC-Chapel Hill, has written a book on the poultry industry and has devoted years to investigating the industry since 1998. He says that issues regarding bathroom breaks are common among poultry workers across the country. “You hear stories of workers who say they soil themselves on the line,” Cuadros said in a telephone interview Monday. “The workers say they feel intimated because they are threatened with their jobs and also immigration reprisal.”

Well Said: Los Jets and the revitalization of a small North Carolina town

Link: https://www.unc.edu/discover/well-said-los-jets-and-the-revitalization-of-a-small-north-carolina-town/ On this week’s episode, associate professor Paul Cuadros shares how he applies lessons he learned in Siler City to developing the Latinx community on campus.

“A Home on the Field,” UNC TEDx Talk

Link: https://www.youtube.com/watch?v=OokhjEm8N_4 TEDx Talk on immigration in America, Memorial Hall. Live on April 1, 2017. Paul Cuadros’ talk focuses on the impact of immigration and demographic change in a small rural Southern town in North Carolina as told through the lives of an Latino high school soccer team that he has coached for 15 years. The lessons learned from the stories of Los Jets and the long-time residents of Siler City, NC are an example of how America can deal with changing demographics and immigration in a time of fear and uncertainty.