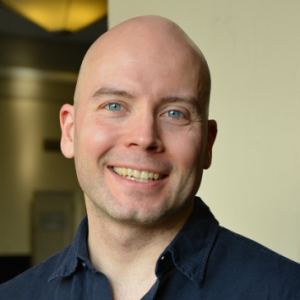 Covering CRISPR, gene editing – and what it might mean for generations to come? Our experts can help

Dr. Paul Langridge is an award-winning biologist serving as an assistant professor in the Department of Biological Sciences.

Langridge's work has been published in several notable publications, including the "Journal of the American Society of Nephrology" and "Experimental Cell Research."

He earned his doctoral degree from the University of Cambridge and a bachelor's degree from Imperial College.

Funding award for a two-year pilot study to develop a system for devising and testing synthetic cell-communication technology for regenerative medicine and tissue engineering. The aim is to determine how synthetic receptors can be used to organize cell behavior and alter the morphology of a tissue.

DSL ligands activate Notch by inducing proteolytic cleavage of the receptor ectodomain, an event that requires ligand to be endocytosed in signal-sending cells by the adaptor protein Epsin. Two classes of explanation for this unusual requirement are (1) recycling models, in which the ligand must be endocytosed to be modified or repositioned before it binds Notch and (2) pulling models, in which the ligand must be endocytosed after it binds Notch to exert force that exposes an otherwise buried site for cleavage. We demonstrate in vivo that ligands that cannot enter the Epsin pathway nevertheless bind Notch but fail to activate the receptor because they cannot exert sufficient force. This argues against recycling models and in favor of pulling models. Our results also suggest that once ligand binds receptor, activation depends on a competition between Epsin-mediated ligand endocytosis, which induces cleavage, and transendocytosis of the ligand by the receptor, which aborts the incipient signal.

Journal of the American Society of Nephrology

Glomerular filtration is one of the primary functions of the kidney. Podocytes, a highly specialized cell type found in glomeruli, are believed to play a critical role in that function. Null mutations of genes expressed in podocytes like WT1, nephrin, and NEPH1 result in an embryo and perinatal lethal phenotype and therefore do not allow the functional analysis of these genes in the adult kidney. Here is describes the generation of a model that will allow such studies. We have engineered transgenic mice in which the disruption of targeted genes can be induced in a temporally controlled fashion in podocytes. For this, a transgene encoding the mutated estrogen receptor-Cre recombinase fusion protein was introduced into the mouse genome. Animals were crossed with Z/AP reporter mice to test for efficient and inducible recombination. We found that, after injection of inducer drug tamoxifen, Cre fusion protein translocates to the nuclei of podocytes, where it becomes active and mediates recombination of DNA carrying loxP target sequences. These animals provide for the first time a tool for silencing genes selectively in podocytes of adult animals.

Changing directions in the study of chemotaxis

The guidance strategy of a cell varies with the chemotactic gradient: in steep gradients, cells produce pseudopodia directly up the gradient, but in weak gradients, pseudopodia are produced at random, with cells steering by favouring the pseudopod that is furthest up the gradient. Cells can also become polarized such that they maintain the same front end, even when forced to change direction by a changing gradient.