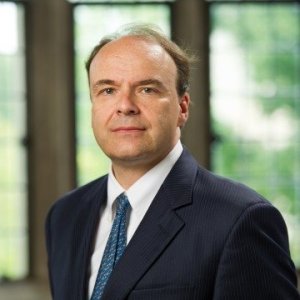 Before joining the faculty, Professor Kochenburger, a graduate of Yale University and Harvard Law School, spent eleven years as counsel at Travelers Property Casualty, where he managed significant coverage and bad faith litigation, as well as legislative and regulatory affairs across such subjects as workers compensation, OSHA, guaranty funds, tort reform, antitrust, and environmental issues. His professional experience also includes serving as an assistant attorney general in the Consumer Protection Division of Iowa’s Department of Justice where, for more than four years, he enforced consumer credit laws and led litigation nationwide against several of the largest financial services companies in America. From 1986-1988, he served as special assistant to the dean of Harvard Law School.

As a funded consumer representative for the National Association of Insurance Commissioners, Professor Kochenburger advocates for consumer interests on property-casualty and life insurance regulatory issues. He also regularly consults with policyholders, government agencies, and nonprofit organizations on insurance and consumer issues, serves as an expert witness in insurance-related lawsuits, and is an associate editor for the ABA Tort Trial & Insurance Practice Law Journal.

Businesses Trying to Rebound After Unrest Face a Challenge: Not Enough Insurance

In Kenosha, more than 35 small businesses were completely destroyed, and around 80 have been damaged, according to the city’s business association. Almost all are locally owned and many are underinsured or struggling to manage. “It’s a common problem, businesses being underinsured, and the consequences can be devastating,” said Peter Kochenburger, executive director of the Insurance Law LL.M. Program and a University of Connecticut law professor.

What is Gun Liability Insurance?

After the tragic shooting at Sandy Hook Elementary School shooting, there were many proposals advanced by the media, advocacy groups, legislators, and academics for mandating liability insurance for all gun owners. None of those legislative proposals passed, but the argument continues. To discuss why that was, what gun liability insurance actually is, and if it could be helpful, JJ is joined by Peter Kochenburger, who is the Executive Director of the Insurance Law LL.M. Program, Deputy Director of the Insurance Law Center and Associate Clinical Professor of Law at UConn Law School. Peter is an expert on gun liability insurance.

When a Minneapolis barber’s shop burned down, a GoFundMe raised $130,000 — and some new problems

Civil unrest is commonly covered in building insurance, according to attorney Peter Kochenburger, deputy director of the Insurance Law Center at the University of Connecticut School of Law. The building that houses Fade Factory is insured and has been in James’ family for more than 40 years, James later told WCCO. James did not immediately return a request for comment from Grow.

The industry says the scale of the coronavirus pandemic is too great to bear and business interruption insurance is intended to compensate for lost income, rent, wages and other expenses following more limited setbacks such as fires or natural disasters. “This scares the heck out of property casualty companies,” said Peter Kochenburger, executive director of the Insurance Law Program at the University of Connecticut School of Law. “They never collected a premium for this kind of virus coverage."

Secrecy, Self-Dealing, and Greed at the N.R.A.

An official assessment performed by Cummins last summer dryly describes the N.R.A.’s decision-making during the previous year as “management’s shift in risk appetite.” The document analyzes the organization’s executive-liability exposures and discusses insurance policies that “protect NRA directors and officers from claims by third parties that they have breached their duties, such as by mismanagement of association assets.” From 2018 to 2019, it says, insurance costs increased by three hundred and forty-one per cent. “To say this is a major increase would be an understatement,” Peter Kochenburger, the deputy director of the Insurance Law Center at the University of Connecticut, told me. “This seems to be pretty direct evidence that the N.R.A.’s problems are not due to New York but rather to how the organization conducts itself.”

How "big data" gives insurers a giant edge over consumers

Facial features are just one method insurers use to decide who to cover, at what price and, conversely, who not to cover. The risk is that faces that look older, weightier or unhealthy will have a harder time buying insurance from Gen Re, said professor Peter Kochenburger of the University of Connecticut Law School. It's quite possible also that this technology will discriminate against people of color, he added.

By overlaying the data on maps marking its customers’ locations, the company can quickly identify those who are likely to have been affected, said Jim Wucherpfennig, Travelers vice president of claims. “That allows us to deploy people and resources where they are needed most,” he said. The same data also can be used to determine risk and pricing for insurance in any given area, said Peter Kochenburger, the deputy director of the University of Connecticut’s insurance law center. Insurers, for example, can use the telemetry to identify local vegetation, wind patterns and fire history. In some cases, it can determine that the owner of one home is more likely to suffer damage than the owner of a neighboring home, he said.

Disasters Are Getting Costlier, So the U.S. Government Is Buying Reinsurance

Disaster and insurance experts said that reinsurance would probably work at sheltering taxpayers from unexpected costs. But they said it’s far from clear that reinsurers would exert enough influence on the government to enact policies that reduce Americans’ exposure to risk -- policies that tend to be unpopular, which is why they haven’t been adopted yet. Reinsurers have significant influence over the decisions made by primary insurers, whose business models depend on reinsurers agreeing to buy their risk, according to Peter Kochenburger, a professor and deputy director of the Insurance Law Center at the University of Connecticut School of Law. But he said that same dynamic doesn’t hold for the government.

Dog owners, here's what you need to know about liability insurance

"If you have a dog, and you own or you rent, you need to think about this," said Peter Kochenburger, deputy director of the Insurance Law Center at the University of Connecticut School of Law.

Gun owners who want specialized insurance for their firearms may have less access to one kind of policy following a shooting massacre in Florida last month. Gun owners generally will be covered for liability under their homeowners’ or renters’ insurance policies, according to Peter Kochenburger, deputy director of the Insurance Law Center at the University of Connecticut School of Law.

Why is Lloyd’s of London Insuring American Guns?

The NRA-endorsed policies are unusual, because insurance policies people buy as individuals don’t normally cover defense costs stemming from criminal prosecution. The concern is that such coverage would present a “moral hazard,” meaning it disincentivizes risk avoidance, said Peter Kochenburger, a professor at the University of Connecticut School of Law.

AFTER LAS VEGAS ATTACK, SOME ARTISTS ARE CONSIDERING 'TERRORISM INSURANCE'

Peter Kochenburger suggests that insurance companies peddling active shooter or terrorism insurance policies could easily capitalize on fear without ever having to pay out any claims. Mass shootings continue to rise in their severity, but they aren't rising in frequency.

“Any one single incident is a tragedy. But compare that to the number of possibilities, the millions of events that could occur,” University of Connecticut School of Law professor Peter Kochenburger said, pointing to the numerous concerts, sports games and other public events that take place across the country each day. But what matters to policyholders is not so much frequency as fear: “If you could sell shark bite insurance, you could probably make a lot of money.”

"But lies are likely to catch up with you, especially if you have to file a claim. State laws vary, but if the lie is material to your claim, the insurer could deny you coverage and even cancel your policy, Peter Kochenburger, deputy director of the University of Connecticut's Insurance Law Center, told CNBC. You might also run afoul of state insurance fraud laws..."

"'It's not intuitive that how I handle my credit card can affect things like my auto or home insurance,' Peter Kochenburger, deputy director of the University of Connecticut's Insurance Law Center, told CNBC..."

2014 Gun violence and mass shootings have dominated headlines during the last several years. These tragedies, including the Sandy Hook Elementary School shooting, received national and international attention and prompted new demands to address gun violence in the United States. Among the many proposals advanced by the media, advocacy groups, legislators, and academics is mandating ...

2013 Climate change started as a scientific theory, became the subject of environmental policy and international negotiation, and today manifests itself within the courts in a series of boundary testing cases that challenge the settled concepts of risk and redress available under both environmental and insurance law. As our climate becomes increasingly unstable and the causal link between damage ...