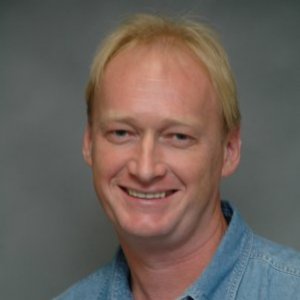 Guido Mueller’s research interests include quantum optics, terrestrial and space-based gravitational wave observatories (LIGO, LISA), and detectors for axions and axion-like particles. He is a professor in the Department of Physics in the College of Liberal Arts and Sciences.

Einstein was right: Gravity and government are powerful -- LIGO physicists

An international collaboration of scientists, the LIGO Scientific Collaboration, has announced the first detection of gravitational waves, ripples in the fabric of space and time that carry information about the cosmos. This discovery is not only an important milestone for physics and astronomy, but also a reminder of how powerful and broad the impact of scientific research can be.

That involvement began with an email message sent in October 1995 to the physics faculty by Mitselmakher, who had just joined the Physics Department as a senior professor. The message was about research opportunities in LIGO and was motivated by Mitselmakher’s knowledge of the LIGO project from his work with Barry Barish (then LIGO Laboratory Director) in high energy physics. A number of faculty responded. The initial group of active participants consisted of Mitselmakher, Whiting, and physics professors David Reitze and David Tanner. Shortly after this beginning, two other current faculty members joined the UF LIGO group: Klimenko in 1997 and Guido Mueller in 1998.

“We’ll see hundreds or thousands of them, and they’re virtually guaranteed,” says Guido Mueller, a physicist at the University of Florida in Gainesville.

Prospects for a space-based gravitational-wave observatory

General relativity can be summarized by John Wheeler's now-famous dictum: “Spacetime tells matter how to move, matter tells spacetime how to curve.”1 Within this framework, gravitational waves (GWs) are the messengers that tell distant observers about changes in local mass distributions. They will soon be discovered by ground-based observatories such as Advanced LIGO2 (Laser Interferometer Gravitational-wave Observatory) and Advanced Virgo3 in the 10Hz to 10kHz frequency range, and by pulsar timing arrays4 in the nHz to μHz range.

Since the very beginning of astronomy the location of objects on the sky has been a fundamental observational quantity that has been taken for granted. While precise two dimensional positional information is easy to obtain for observations in the electromagnetic spectrum, the positional accuracy of current and near future gravitational wave detectors is limited to between tens and hundreds of square degrees.

The missing link in gravitational-wave astronomy

The LISA telescope is a critical part of the science interferometer and is subject to the 1pm/Hz‾‾‾√ in-band length stability requirement and the long term length stability requirement of 1 um over mission durations. These tests will be conducted by building an ultra-stable optical cavity, the Telescope Test Structure (TTS), around it. The TTS design must be accommodating of the ∼84 cm long telescope.

LISA is a future space-based gravitational wave (GW) detector which will detect GW in the low frequency regime (0.1 mHz to 1 Hz). The sources in this regime are: supermassive binary black hole mergers, extreme mass ratio binary inspirals and galactic compact binaries.LISA's interferometer signals will be dominated by laser frequency noise which has to be cancelled by about 7 orders of magnitude using an algorithm called time delay interferometry (TDI).

Residual amplitude modulation (RAM) is a long-standing issue in optical phase modulation. RAM produces an undesired offset in control signals of optical cavities, such as the ones in Advanced LIGO. Here we present a study of ``complex modulation" (CM) in which we simultaneously modulate the amplitude and the phase of a laser beam. CM provides a feasible approach to reduce concurrent RAMs. 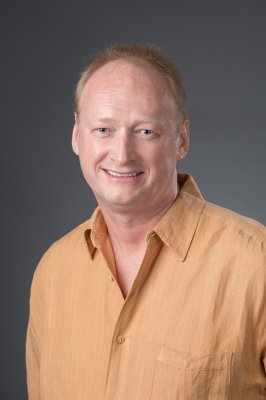 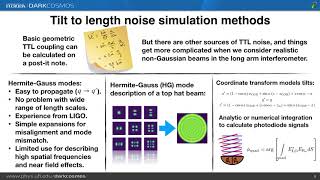 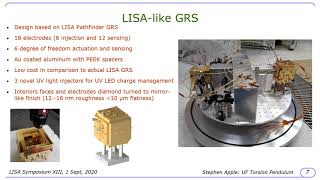