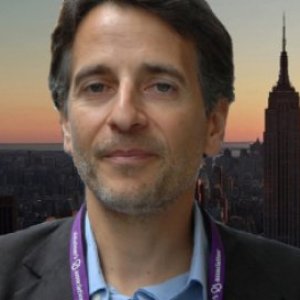 I am interested in understanding the variability of clinical response to AD pathology, which is related to different inherent or acquired abilities. Such abilities, which are considered to represent each individual's cognitive reserve include IQ, education, and intellectual-social-physical life activities. These associations are explored epidemiologically or with imaging resting and activation PET and MRI studies.

Multivariate statistical methods in brain imaging are able to capture connectivity among brain regions and therefore identify brain networks (rather than individual brain areas). I am investigating whether differential expression of these networks may provide useful diagnostic or prognostic tools for MCI and AD.

Using data from our epidemiological cohorts I am exploring individual variability in rates of decline in AD as a function of either clinical (APOE genotype, education, life-activities, psychiatric symptoms, extrapyramidal features etc) or MRI imaging (i.e. white matter hyperintensities) predictors.

More recently, I have developed a special interest in the contribution of diet in AD risk. Recent literature on the effect of individual dietary elements is conflicting. I am investigating the effect of composite dietary patterns (such as the Mediterranean Diet) in AD risk.

Throughout the weekend, a who’s who of renowned voices covered such topics as heritage and culture, science and medicine, sports, foreign policy, and the Presidency...

Scientists long believed that altering diet could not improve memory. But evidence to the contrary started to emerge about 10 years ago. For example, Nikolaos Scarmeas of Columbia University and his colleagues collected information about the dietary habits and health status of about 2,000 Medicare-eligible New Yorkers—typically in their mid-70s—over the course of four years on average...

Journal of Stroke and Cerebrovascular Diseases

2016 This study aimed to examine the association between self-reported sleep disordered breathing (SDB) (“awaken short of breath or with a headache”) and mortality in a large and ethnically diverse group of community-dwelling elderly people.

Association Between Sleep Problems and Brain Volume in the Elderly

The Journal of the American Academy of Neurology

2015 To examine the association between self-reported sleep problems and regional brain volume in a large sample of older adults.

2015 In the present data, we provide the details of the cross-sectional study, from the Washington Heights-Inwood Community Aging Project (WHICAP) that examined the association between Apolipoprotein E (APOE-ε4) and snoring/sleep apnea. A total of 1944 non-demented older adults constituted our sample. Sleep dysfunction was measured using sleep categories derived from the Medical Outcomes Study Sleep Scale. Stratified analyses were conducted in order to examine the association between APOE-ε4 and sleep variables by ethnic group. For further analyses and enhanced discussion, see “Examining the association between Apolipoprotein E (APOE) and self-reported sleep disturbances in non-demented older adults” by Tsapanou et al. (2015) [1].