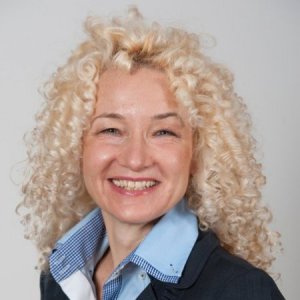 Dr. Maric was selected as the University of Connecticut's 17th President by the Board of Trustees on September 28, 2022.

The University's most prestigious faculty title, candidates must excel in all three areas of research, teaching, and public engagement. 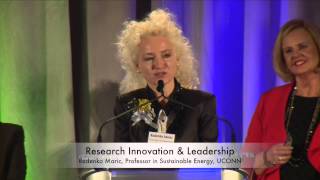 With her corkscrew curls, dressed in white and sporting blazing-white, UConn-branded sneakers, Radenka Maric seems to glow as morning sunlight illuminates her Gulley Hall office on the sparkling autumn day we meet for an interview. Like a “tell” in a poker game, the University of Connecticut’s new president reveals her cards as we settle into comfortable sofas: Our interview couldn’t begin until I agreed to let her properly welcome me by serving coffee, tea or water. Maric may be an internationally recognized expert in clean energy, but she’s powered by the fuel cell of a soul with a European sensibility.

Hydrogen Fuel Cell technology in trucks and cars; could it be coming to CT?

Connecticut recently passed the Clean Air Act. Our state will have the same zero-emission standards by 2030 as California, where these vehicles are exclusively sold. President Rademka Maric from UConn says meeting those standards will involve more than hydrogen fuel cells. “Alternatives are going to be a mixed portfolio. It will be an electric car, it will be a fuel cell car, it will be offshore wind, it will be solar and integration of the technologies,” Maric said.

According to UConn’s Interim President Radenka Maric, this focus on entrepreneurship puts the school ahead of its academic competition. “I think it’s important because this is what the future generations want,” she explained. “We see a significant number of students, both undergraduate and graduate, who are starting companies. The demand is shifting — they are not looking for the existing jobs anymore, but they are looking at how to create a new job and how to start new businesses.”

UConn researchers won a total of $375.6 million in new awards in the 2020-21 fiscal year, which ended June 30, well exceeding last year’s then-record of $285.8 million, the university announced Wednesday. Raising research funding levels to nationally competitive levels has been a top goal of university officials in recent years. “UConn puts a great deal of attention and work into the support and cultivation of its research, and we have many reasons to be optimistic based on our trajectory in recent years that this growth is a trend that will continue,” Radenka Maric, UConn’s Vice President for Research, Innovation, and Entrepreneurship, said in a statement.

Last year, the TIP companies raised nearly $463 million in total funding. At the end of the past fiscal year, those firms cumulatively had 208 full-time and part-time positions on their payrolls. “The incubators are important spaces that can help regional economic development,” said Radenka Maric, UConn’s vice president for research, innovation and entrepreneurship. “It’s not only by launching companies around the university’s intellectual property, but also providing startups with access to institutional resources like infrastructure and access to people that can accelerate their success.”

How Green Are Electric Vehicles?

Experts point out that spent batteries contain valuable metals and other materials that can be recovered and reused. Depending on the process used, battery recycling can also use large amounts of water, or emit air pollutants. “The percentage of lithium batteries being recycled is very low, but with time and innovation, that’s going to increase,” said Radenka Maric, a professor at the University of Connecticut’s Department of Chemical and Biomolecular Engineering.

The Big Question with Radenka Maric: On the Role of Scientists in Society

Dr. Radenka Maric is the Vice President for Research, Innovation and Entrepreneurship and CT Clean Energy Fund Professor of Sustainable Energy in the Department of Chemical & Biomolecular Engineering and the Department of Material Science & Engineering at the University of Connecticut and UConn Health, with responsibility for research leadership and technology commercialization of one of the top twenty-five public research universities in the United States, including its academic medical center. Dr. Maric graciously agreed to share her thoughts regarding SCINQ’s Big Question.

As an engineer, Radenka Maric has seen her work incorporated into cutting-edge car engines that tap into hydrogen fuel cells for power. As a senior executive at the University of Connecticut, Maric has seen her work both in the institution’s burgeoning research portfolio and the proud faces of graduating undergraduate and graduate students.

"There is no question that joining forces with industry partners to leverage our unique resources and expertise helps transform discoveries from an invention to an innovation that benefits society," says Radenka Maric, UConn's vice president for research. "We're committed to continuing to foster an entrepreneurial and industry-aware culture at the University to ensure UConn research has a positive impact on the health of Connecticut's citizens, as well as our economy."

Researcher, Painter, Pianist, Seamstress: The Many Shades of Radenka Maric

To begin to describe Radenka Maric would already be to fail; if there is a single thread that runs through her life, it would be her belief that humans cannot be reduced to anything so singular. Maric is an administrator, engineer, painter, pianist, clothier and amateur chef. She was born in the former Yugoslavia, educated in Japan and is now based in Storrs, where she arrived in 2010 as a professor of chemical and biomolecular engineering. Last summer Maric, 51, was appointed as UConn’s vice president for academic research, charged with UConn's $260 million in research enterprise funds.

Tom Ebaugh, working toward a Ph.D. in chemical engineering, says Radenka Maric is the reason he’s doing it at the University of Connecticut. “I wouldn’t be here if she wasn’t,” said Ebaugh, 24, wearing plastic gloves and protective glasses at a fuel cell energy laboratory, part of UConn’s Center for Clean Energy Engineering. Originally from Pennsylvania, he is among a handful of graduate students working under Maric, who is not only a professor in sustainable energy, but as of July, vice president of academic research at Connecticut’s flagship university.

The research team’s next steps will take this innovative design and run with it — hopefully making the method and VSD commercially available. As stated by Radenka Maric, UConn’s vice president for research, “Dr. Loew’s experience is a prime example of how the NSF I-Corp program can transform high-potential academic discoveries into viable products and services … Accelerate UConn helps our preeminent faculty move their ideas beyond the lab so they can join the ranks of other successful entrepreneurs and industry leaders, and have an impact in our communities and on the economy.”

2016 Hydrogen is one of the world's most important chemicals, with global production of about 50 billion kg/year. Currently, hydrogen is mainly produced from fossil fuels such as natural gas and coal, producing CO2. Water electrolysis is a promising technology for fossil-free, CO2-free hydrogen production...

2015 Catalytic materials are complex systems in which achieving the desired properties (i.e., activity, selectivity and stability) depends on exploiting the many degrees of freedom in surface and bulk composition, geometry, and defects. Flame aerosol synthesis is a process for producing nanoparticles with ample processing parameter space to tune the desired properties. Flame dynamics inside the reactor are determined by the input process variables such as solubility of precursor in the fuel; solvent boiling point; reactant flow rate and concentration; flow rates of air, fuel and the carrier gas; and the burner geometry...