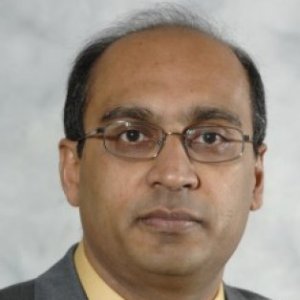 
An expert in telemedicine – robotics and computer-assisted surgical procedures.

Ranjan Mukherjee received his BS degree in Mechanical Engineering from the Indian Institute of Technology, Kharagpur, in 1987. He received his MS and PhD degrees in Mechanical Engineering from the University of California, Santa Barbara, in 1989 and 1991. Prior to joining Michigan State University, he was an Assistant Professor at the US Naval Postgraduate School in Monterey, California, from 1991 to 1996.

Ranjan Mukherjee’s research interests are in the broad area of mechatronics and robotics. He is a Fellow of the ASME.

Impulsive Dynamics and Control of the Inertia-Wheel Pendulum

2018 The dynamics of the inertia-wheel pendulum, when subjected to impulsive inputs, can be described by algebraic equations. Optimal sequences of these inputs, that minimize their infinity norm, are designed for rest-to-rest maneuvers. The results are applied to the well-studied swing-up problem, and high-gain feedback is used for continuous approximation of the inputs and simulation of the impulsive dynamics. Analytical and simulation results establish a direct link between high wheel velocities during swing-up and control strategies that take the pendulum directly to the upright configuration. They also indicate that optimal trajectories resemble those of energy-based controllers and can be designed to satisfy the torque constraint of the actuator.

Stabilizing and destabilizing effects of damping in non-conservative systems: Some new results

Journal of Sound and Vibration

2018 Previous work has amply demonstrated that non-conservative systems can be made unstable by the application of damping. Systems with two neutrally-stable damping levels, whereby the system initially gains stability but later loses stability as the level of damping is increased, have also been observed. The phenomenon of three damping-induced stability transitions has not been reported in the literature. Here we show that the addition of damping can cause non-conservative systems to become stable, then unstable, then stable again at the same value of the non-conservative forcing variable. This combination of stability transitions is found to exist for several example systems, including linkages with follower end forces and fluid-conveying pipes. Another interesting observation is that a given system can exhibit different forms of stability transitions in different regions of its parameter space. In a particular example, the neutral stability curves corresponding to two different modes are observed to intersect, such that the boundary separating the stable and unstable regions is piecewise continuous. This observation requires that the accepted definitions of “stabilizing” and “destabilizing” roles of damping be revised. All of these stability transition behaviors were found by applying the Routh-Hurwitz procedure, whereby the traditional procedure is first applied to the characteristic polynomial of the system, and then again to guarantee the existence of a second-order auxiliary polynomial in the Routh array. This procedure is developed in the context of examples, each of which concerns a classical apparatus who dynamics are more interesting than previously believed.

2018 A feedback control strategy is presented for improving the transient response of the ubiquitous mass-spring-damper (MSD) system; the closed-loop system has a small settling time with no overshoot for a step input. This type of response is ideal for MSD systems subjected to a unilateral constraint such as radio-frequency micro-electro-mechanical-system (RF MEMS) switches, which are required to close in a short period of time without bouncing. The control strategy switches the stiffness of the MSD between its nominal value and a negative value, resulting in a hybrid dynamical system. A phase portrait analysis of the hybrid system is carried out to establish the asymptotic stability property of the equilibrium and quantify the transient response. Simulation results are presented using parameter values of a real RF MEMS switch from the literature. As compared to open-loop strategies that are currently used, the proposed feedback control strategy promises to provide comparable switch-closing times with robust performance and eliminate bouncing.

2017 The swing-up control problem of the inertia wheel pendulum is revisited in this paper. As different from existing methods, purely impulsive control inputs are used for swing-up. A mathematical formulation of the problem indicates that swing-up can be achieved using impulsive inputs applied at two discrete time instants. Two different swing-up schemes are presented and validated using numerical simulations where the impulsive inputs are approximated by high-gain feedback. The results of numerical simulations establish a direct link between high wheel velocities during swing-up and control strategies that take the pendulum directly to the upright configuration. They also indicate that the time required for swing-up is much less than that reported in the literature.

2017 This paper presents an algorithm to enlarge the estimate of the Region of Attraction of stable equilibria of underactuated systems. To achieve this, we use a combination of the Sum of Squares (SOS) method and the Impulse Manifold Method (IMM). Initially, the SOS method is used to optimize the control input u(x) in order to obtain an enlarged Region of Attraction. The IMM is then applied on enlarged Region of Attraction obtained using SOS to further enlarge it. The IMM is implemented using high gain feedback and to demonstrate the efficacy of our algorithm, we present simulation results where an initial configuration of an acrobot lying outside the true region of attraction is stabilized.