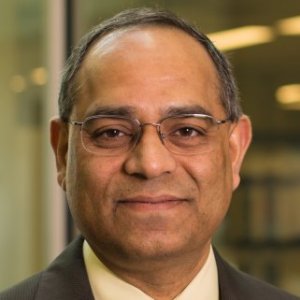 Dr. Gupta is the Associate Dean for Research and a Professor in the School of Engineering at the Virginia Commonwealth University, Richmond, VA. Prior to joining VCU, during 2011-2014, he served as the Director of Energy for Sustainability Program at the National Science Foundation. This program supports fundamental research and education that will enable innovative processes for the sustainable production of electricity and transportation fuels. Processes for sustainable energy production must be environmentally benign, reduce greenhouse gas production, and utilize renewable resources. Projects include those related to biofuels, photovoltaic solar energy, wind energy, and advanced batteries for transportation. During 1995-2014, he was a professor of chemical engineering at Auburn University. He has published numerous research papers and patents on pharmaceuticals and fuels, and is the recipient of Wright A. Gardner Award (2013) from the Alabama Academy of Science, Distinguished Graduate Faculty Lectureship award (2007) from Auburn University, Science and Engineering Award (2002-2004) from DuPont, Junior and Senior Research awards (1998, 2002, 2009) from Auburn Alumni Engineering Council, the James A. Shannon Director’s Award (1998) from the National Institutes of Health, and Young Faculty Career Enhancement Award (1997) from Alabama NSF-EPSCoR.

He is a Fellow of Alabama Academy of Science (2008) and serves/served on the editorial advisory boards various journals including ACS Sustainable Chemistry & Engineering, Industrial & Engineering Chemistry Research, Nanomedicine: Nanotechnology, Biology and Medicine (2005-07), Journal of Biomedical Nanotechnology, Research Letters in Nanotechnology, and Research Letters in Chemical Engineering. He received the B.E. degree (1987) from Indian Institute of Technology, Roorkee, the M.S. degree (1989) from the University of Calgary, and the Ph.D. degree (1993) from the University of Texas at Austin, all in chemical engineering. During 1993-95, he did postdoctoral work at the University of California, Berkeley. His recent books are: Nanoparticle Technology for Drug Delivery (2006, Taylor & Francis), Solubility in Supercritical Carbon Dioxide (2007, CRC Press), Hydrogen Fuel: Production, Transport, and Storage (2008, CRC Press), Gasoline, Diesel and Ethanol Biofuels from Grasses and Plants (Cambridge University Press, 2010), and Compendium of Hydrogen Energy (Elsevier, 2015).

Liquid fuels from methane and biomass

The University of Texas at Austin: Ph.D., Chemical Engineering 1993

VCU researchers believe they can significantly extend battery life, drive down costs and reduce safety risks by redesigning materials found in lithium-ion batteries, which are commonly used to power smartphones and other electronic devices. The project will be run by Ram B. Gupta, associate dean for faculty research development and a professor of chemical and life science engineering at VCU’s College of Engineering. Gupta and his team will test an approach for synthesizing material for the battery’s cathode.

Use of novel electrochemical engineering and materials technology to improve batteries and supercapacitors for cell phones and cars.

Use of electro-catalysis and nanotechnology to simplify pharmaceutical manufacturing pathways.

Use of supercritical water technology to produce fuel and bio-carbon from biomass.

The creation of novel halloysite-based compositions is disclosed. In one embodiment, the hollow clay nanotubes of halloysite are loaded with nanoscale zerovalent iron particles. The resulting composition provides an effective manner of remediating chlorinated hydrocarbons. In another embodiment, the hollow clay nanotubes of halloysite are imbibed with dispersants such as DOSS and Tween 80 surfactants. The resulting composition stabilizes oil-in-water emulsions and subsequently releases the surfactants, thereby reducing interfacial tension significantly, which allows much smaller droplets to form and thus provides for more effective oil remediation.

A method for treating a fabric for ultraviolet radiation protection, enhanced resistance to degradation, and enhanced resistance to fire is disclosed which comprises the steps of adding zinc oxide nanoparticles to a solution of 3-glycidyloxypropyl-trimethoxysilane, placing a fabric in the mixture of zinc oxide particles and 3-glycidyloxypropyl-trimethoxysilane, curing the fabric, and washing the fabric. Other methods of treating a fabric are disclosed.

A method and system of converting biomass to biochar in a hydrothermal carbonization apparatus wherein subcritical water at a temperature of 230-350° C. and 500-3000 psi is reacted with the biomass to form biochar, biocrude and gases. The method and system include recycling the biocrude back to the hydrothermal carbonization apparatus which improves biochar yield and provides water for the biomass reaction to occur.

The current invention, Supercritical Antisolvent Precipitation with Enhanced Mass Transfer (SAS-EM) provides a significantly improved method for the production of nano and micro-particles with a narrow size distribution. The processes of the invention utilize the properties of supercritical fluids and also the principles of virbrational atomization to provide an efficient technique for the effective nanonization or micronization of particles. Like the SAS technique, SAS-EM, also uses a supercritical fluid as the antisolvent, but in the present invention the dispersion jet is deflected by a vibrating surface that atomizes the jet into fine droplets. The vibrating surface also generates a vibrational flow field within the supercritical phase that enhances mass transfer through increased mixing. Sizes of the particles obtained by this technique are easily controlled by changing the vibration intensity of the deflecting surface, which in turn is controlled by adjusting the power input to the vibration source. A major advantage of the SAS-EM technique is that it can be successfully used to obtain nanoparticles of materials that usually yield fibers or large crystals in SAS method. Microencapsulation via coprecipitation of two or more materials can also be achieved using the SAS-EM technique.