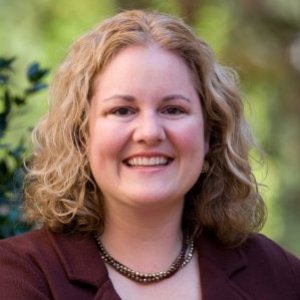 
Dr. Rebecca Macy is a faculty member at the School of Social Work at the University of North Carolina at Chapel Hill. 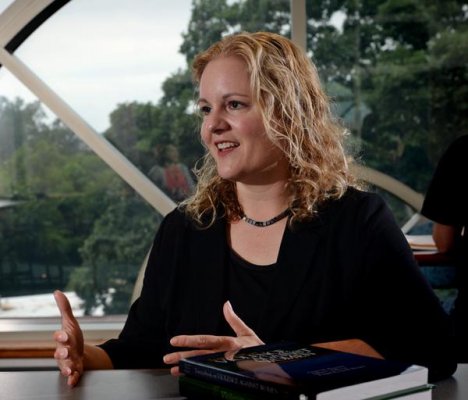 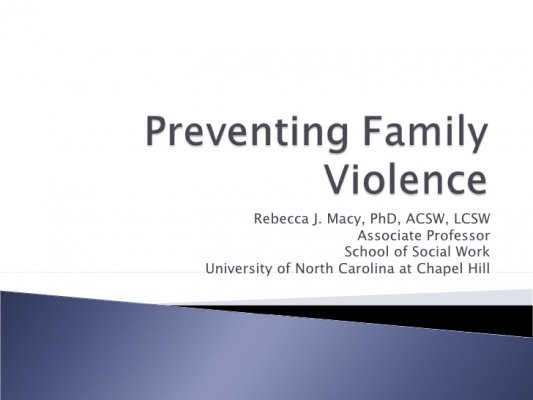 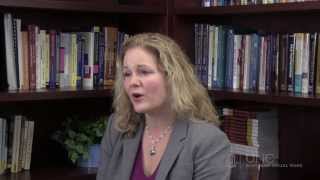 Dr. Macy joined the faculty of the University of North Carolina at Chapel Hill in 2002, after receiving a doctoral degree in social welfare from the University of Washington in Seattle, and a M.S.W. from Tulane University in New Orleans. Additionally, Dr. Macy is a licensed social worker with practice experience in community mental health where she has worked with violence survivors.

Office of the Provost Award for Engaged Research (2013) (professional)

The Office of the Provost Engaged Scholarship Award was established in 2000 by Provost Dick Richardson to recognize extraordinary public service and engaged scholarship at the University of North Carolina at Chapel Hill.

The Mary Ann Chap Award is given to those who have made major contributions toward achieving the Center’s mission: to stop sexual violence through support, education, and advocacy.

Awarded to Dr. Macy in 2005 and 3006, School of Social Work, University of North Carolina at Chapel Hill.

The Social Work Podcast provides information on all things social work, including direct practice (both clinical and community organizing), research, policy, education... and everything in between!

Presentation at the Innovations in Domestic and Sexual Violence Research and Practice Conference  Greensboro, NC

The Pitt County Sheriff'ʹs Office and the Office on Violence Against Women $156,250

Research with children exposed to partner violence: Perspectives of service-­mandated, CPS and court-involved survivors on research with their children

Rapidly growing numbers of female survivors of intimate partner violence (IPV) who are the primary caregivers for their children are being mandated to services by child protective services (CPS) and/or the court system. Research is needed to better understand the experiences of these children; however, such research is hindered by the dearth of empirical evidence to guide researchers in how best to recruit and collect data about and from IPV-exposed children whose families are mandated to services. From a qualitative study with 21 CPS- and/or court-involved mothers, this article reports findings about participants’ perspectives regarding research with their IPV-exposed children. Our analyses determined three key findings: (a) mothers’ reasons or motivations for allowing their children to participate in research, (b) mothers’ reasons for refusing consent for their children to participate, and (c) strategies for increasing research participation among this population. Based on these findings, we offer recommendations for enhancing research participation among IPV-exposed children from CPS- and/or court-involved families mandated to services, including specific recruitment and data collection strategies. These recommendations and strategies also hold value for research with other vulnerable families and children struggling with violence.

This practice note presents findings from a statewide survey of domestic violence and sexual assault agency directors (n = 80; 77% response rate), regarding their opinions about the outcome information that should be collected from victims during evaluations of five commonly provided services: legal advocacy, medical advocacy, group services, individual counseling, and shelter. The findings showed that four information types were repeatedly ranked among the most important to collect to understand whether services helped victims including victims’ satisfaction with services, victims’ progress toward meeting their goals, changes in the extent of violence and/or trauma that victims experienced, and changes in victims’ knowledge.

The rapid growth of a subpopulation of women victimized by intimate partner violence (IPV) garnered the attention of 2 human service agencies in 1 Southeastern United States city. These agencies noted a shift in their clientele from female IPV victims who voluntarily sought agency services to victims who were mandated to agency services by child protective services (CPS), the court system, or both. Court‐referred victims had been arrested for perpetrating IPV against their male partners. CPS‐referred victims were experiencing concerning levels of IPV in their families, whether or not the victim had ever perpetrated IPV. Moreover, this subpopulation of women tended to be primary caregivers of children. In response to the growth of this subpopulation, the agencies collaborated to design and implement a program targeting female IPV victims who were primary caregivers for their children and who had been mandated to the agencies’ services. The research team partnered with the agencies to conduct an investigation of this community‐developed program and its participants. This article presents an exploratory, descriptive study that investigates (a) the characteristics of service‐mandated, parenting IPV victims; (b) the needs of service‐mandated, parenting IPV victims; and (c) the types of help‐seeking behavior these women had engaged in before their service referral. Study findings indicate that, although the participants showed parenting strengths and active help‐seeking efforts, this sample of women was characterized by severe IPV experiences and serious mental health needs.

More than 20 years ago, concerns were raised about whether domestic violence and sexual assault agencies need for stable funding would conflict with the values that initiated these respective movements. Since then, the movements have evolved considerably. Therefore, it is timely to investigate the challenges domestic violence and sexual assault agencies face today. This exploratory study used focus groups and interviews to identify the challenges facing North Carolina domestic violence and sexual assault movements from the perspectives of agency directors and funding staff. Using an open-coding approach, seven challenges were identified including funding, sustainability, community norms, tension between grassroots versus professional service providers, lack of attention to sexual assault, the need for welcoming services for all survivors, and the need for comprehensive services to help survivors with co-occurring mental illnesses and substance abuse problems. The findings also pointed to recommendations for ways to address these challenges.