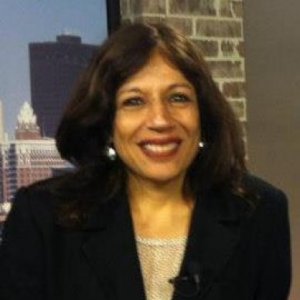 
Born in India and raised in New York, New Delhi and Bangkok, Rekha Basu completed her global, multicultural perspective with a move to the Heartland. Her columns in The Des Moines Register span politics, culture, human rights and social justice, and frequently examine the news from a gendered and minority perspective.

Basu’s columns are distributed nationally by Tribune Content Agency news service. She appears on KCWI’s Great Day morning show in a weekly segment called Rekha’s Voice. She is the author of the book, "Finding Her Voice," a compilation of columns on women's struggles and triumphs in the Midwest.

Basu has a master's degree in political economy from Goddard-Cambridge Graduate School, a master’s in journalism from Columbia University and a bachelor’s in sociology from Brandeis University. She got her international baccalaureate degree from the United Nations International School in New York.

Her columns have earned her an honorary doctorate of humane letters from Grinnell College along with a variety of journalism and social justice awards, including form the Iowa Women's Hall of Fame, the Iowa Farmers' Union, Friends of Iowa Civil Rights and the Iowa Interfaith Alliance.

She has worked as a reporter, editorial writer and columnist at newspapers in New York, Florida and Iowa and been published in scores more across the country and outside it.

Her frequent public speaking appearances include college convocations and a Ted X talk. She has been a guest on The Rachel Maddow Show, BBC, C-Span, CNN. and public radio She's the 2015 moderator for the Des Moines Smart Talk women's lecture series.