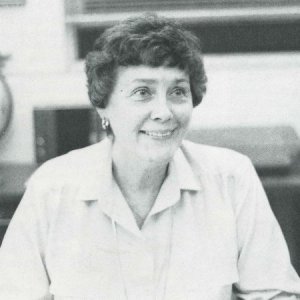 
Renée Harrangue is Emeritus Director of the Marymount Center at LMU.

Renée Harrangue is Emeritus Director of the Marymount Center at LMU. Dr. Harrangue is a member of the Marymount Alumnae Council and a former member of the Sr. Peg Dolan Campus Ministry Center Advisory Council. In addition, she is a former LMU Regent (1982-91), former Chair of the Psychology Department, and she served as a member of the Campaign Steering Committee from 2002-08. Dr. Harrangue was one of the original members of Gryphon Circle (Moderator, 1969-80) and is a member of Kappa Delta Pi Honor Society. She joined the Marymount College faculty in 1958 and later served as Vice President of the College. Dr. Harrangue was involved in high-level meetings regarding the Marymount College and Loyola University merger in 1973. She was instrumental in assuring that the Marymount name would remain in the new name of the University. In a 2003 LMU news release, Dr. Harrangue stated, "I would leave those meetings [on the merger] and tell Sr. McKay that it was no use, and she would send me right back into there and tell me to fight harder. Finally, she told me 'No Marymount, no merger.'"

After the Marymount College and Loyola University merger in 1973, Dr. Harrangue was named the first Provost of LMU. She is credited with commissioning and designing the University seal and mace that incorporated the heritage and iconography of both academic institutions. The Office of Student Life presents the Dr. Renée Harrangue Award at the annual Student Service and Leadership Awards to members of the sophomore class who have distinguished themselves as leaders in service "with and for others." In 2003, Dr. Harrangue received the Distinguished Alumni Award for Loyalty to the University and was also honored as "Woman of the Year" by LMU's chapter of California Women in Higher Education. Dr. Harrangue was born in Los Angeles and graduated from North Hollywood High School in 1951. She holds a BA in English from Marymount College, Class of 1957, and earned an MA and PhD in Psychology from Catholic University of America, Class of 1961 and 1965, respectively. Dr. Harrangue entered the Religious of the Sacred Heart of Mary (RSHM) in 1952 in Tarrytown, New York. She left the RSHM Order circa 1984. Dr. Harrangue resides in Playa del Rey, CA.