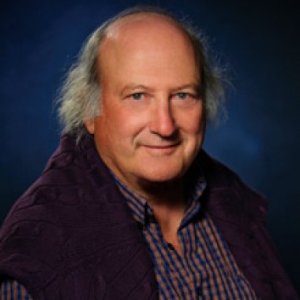 If there's a question on American film Dr. Hadley can't answer, the students and faculty have yet to find it. Whether walking the halls of the School of Film and Television building, or strolling across Alumni Mall, Dr. Hadley is always willing to engage you in a conversation that can range from the latest Hollywood blockbuster to the relative merits of Billy Wilder versus Sam Peckinpah.

After earning his BA from the University of California, Berkeley, and his MA from the University of Wisconsin, Madison, Dr. Hadley went on to complete a both an MFA and a PhD at the University of Southern California. In addition to his teaching duties, Dr. Hadley is also the Director of the Graduate Programs in Film, Television, and Screenwriting. But, his true calling is in the classroom, where he mixes his knowledge of cinema with equal parts careful scholarship and wry humor. Over the years, his classes in film genres and film authors have delighted, and educated, students and colleagues alike.

As much as he enjoys watching films, Dr. Hadley also enjoys writing them. His film, Quotations From Chairman Stu, was screened at Edinburgh and many other film festivals. He has written documentaries on Woody Guthrie, Andrew Carnegie, Charles Lindbergh, Paul Robeson, Mao-Tse-Tung and Samuel Adams for Nickelodeon's Award-winning show, Against The Odds and the pilot, Pop Quiz, for the Disney Channel.