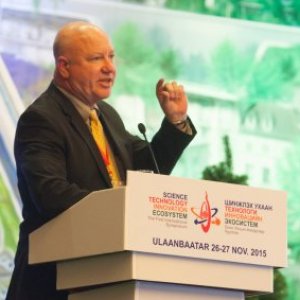 Rick Rasmussen is a successful Silicon Valley entrepreneur with several lifetimes worth of experience and accomplishment. He operates flawlessly across disciplines including startups, the corporate world, government and education. He is a sought-after speaker and has keynoted many conferences around the world.

He is currently serving as Managing Director at Concordia Ventures, a leading education and advisory firm focused on International Business Development. He is a Silicon Valley native with entrepreneurial, executive, government and academic experience focusing on startups and growth stage companies.  He works extensively with governments and economic development agencies looking to connect with Silicon Valley.

Rick advises accelerators and government-led economic development initiatives for a number of countries including Canada, Korea, Austria, Armenia, Brazil, Portugal, Azerbaijan, Mongolia, Mexico and China. Prior, Mr. Rasmussen served as the Trade Commissioner for the Canadian Department of Foreign Affairs and International Trade with responsibility for linking Canadian IT companies to the Valley.

He is an active member of the Sand Hill Angels investment group. He served as an Entrepreneur in Residence for Institutional Venture Partners (IVP) for the semiconductor and equipment sectors. He is an active mentor with a pool of five to ten companies at a given point in time. He serves as a Director of CritterPix, an animated feature film startup in Marin County, CA. and LionSharp, a presentation-based gesture control company in Yerevan, Armenia.

Rick has developed a full set of graduate-level curricula covering the range of startup development from inception through exit. This material has been extensively taught at leading accelerators and international universities as well as UC Berkeley, Stanford University and MIT.

His corporate career spans the semiconductor and networking industries and has ben a member of the executive teams of five companies that staged Initial Public Offerings including LSI Logic, C-Cube Microsystems, @Road, Sage and Intellon. All have since been acquired at an aggregate price of $10B.

Mr. Rasmussen earned an Electrical Engineering and Computer Science degree with highest honors from the University of California at Berkeley as well as a dual MBA degree from UC Berkeley's Haas School of Business and Columbia's Graduate School of Business in New York City with honors.

I've had three significant IPOs in my career. I was on the executive staff for each company and all were eventually sold for over $1B. Unicorns... - LSI Logic. Established the ASIC industry. A record largest Tech IPO at the time. - C-Cube Microsystems. Transitioned video from analog to digital. VP Marketing. Wrote the S-1 and made roadtrip presentations - @ Road. Invented fleet tracking. Interim CEO. Not too bad... ;-)

I was fortunate to be able to work with Rick on a number of projects during our program. He's very intelligent and insightful and his broad knowledge and background was instrumental to our success on projects from Marketing to Economics. He easily flows between technical and non-technical subjects and has the unique ability to explain anything to anyone in terms and concepts that they would understand. I was continually amazed by Rick's ability to frame discussions at a high level and cover the important points, yet also have a firm grasp of the nitty-gritty details that went into the high level discussion. I would absolultely work with Rick anytime on any project. If you have the opportunity to work with him, take it.

Rick was a dynamic leader that organized, expanded, and gave direction to a newly funded start-up. He brought his years of experience to help shore up a founding team that was in need of leadership. He showed a comprehensive, current and detailed understanding of the industry and the technology behind it. His ethical standards are second to none.

"Go Silicon Valley" is an international trade initiative by the Austrian Federal Ministry of Science, Research and Economy (http:// www.en.bmwfw.gv.at) and the Austrian Federal Economic Chamber (http://www. wko.at). It offers selected Austrian SMEs (small and medium-sized enterprises) an opportunity to access the epicenter of IT innovation in Silicon Valley and its abundant sources of partnerships and risk capital. Every year, up to 18 companies are selected by a U.S. jury to spend three months in Silicon Valley at one of the partner business accelerators of the Austrian Trade Commission, Plug and Play Tech Center (http://www. plugandplaytechcenter.com) or GSV Labs (http://www.gsvlabs.com), to learn the ropes and get connected with the local business community.

NEXT STEP was founded by leading members of the business community in Azerbaijan. They created the NEXT STEP Innovation Center in order to identify talented young people willing to innovate and need full support to further their projects. We are looking for the type of special talent that wishes to become leaders in the technology area. Our main mission is to assist these entrepreneurs to present the results of their projects as well as achieve recognition and awareness of their products as the Azerbaijani national brand abroad and mainly in Silicon Valley.

NATI provides leadership to the technology sector through policy development and advocacy activities. Additionally, NATI works to connect key players in the industry through networking events and regular industry communications. Program support for the development and growth of local technology companies, as well as assistance in identification, engagement, and development of export opportunities, is provided by NATI to its membership.

MBA-style course that maps the journey from Company Formation through Exit. The course is intended to provide global startup CEOs, government officials and educators the basic language and tools used by new and growing companies in Silicon Valley. The Open Accelerator program has been taught in leading accelerators around the world and shared with international delegations from every continent. It's a staple for Universities throughout the Near East and has been taught at UC Berkeley, Stanford and San Jose State.

Over 50 postings of coursework online. Each of these are typically 30-45 minutes of class time. Combined to produce half-day, full day or week-long lecture series.