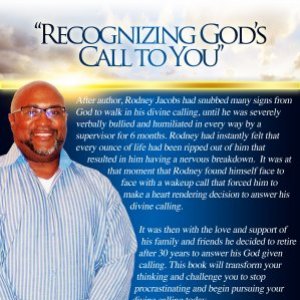 The Power of Restoring Books


“Recognizing God’s Call to You” 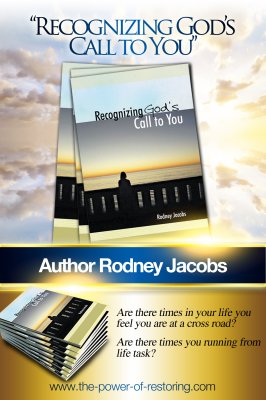 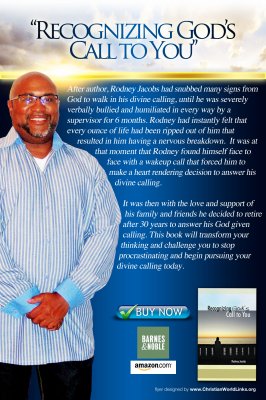 
Rodney Jacobs was born in Philadelphia, PA
on August 12, 1964. He graduated from Mercy
Vocational Catholic High School in June 1982 and
joined the U.S. Army immediately upon graduation.
He was honorably retired from active duty on
March 30, 2012. He married Juanita Davenport in
March 1985 and they have two children, Chiquita
and Rodney Jr.
Rodney’s scholastic achievements include training
in Radio Broadcasting, an Associate of Arts
from Pikes Peak Community College and a BS
in Communications from University Maryland
University College. He is currently pursuing a
career in writing short books to inspire the young
and old, as he believes there is a purpose in our
lives to “Do the right thing” and become the best
we can be in God’s plan.

RELATED EXPERIENCES 5/12-Present (Charlotte- Mecklenburg Schools) Substitute Teacher Performs regular teacher’s class plan while the teacher is absent, including but not limited to the following: • Reports to the principal or school secretary upon arrival at the school • Communicates, collaborates, and cooperates with colleagues, supervisors, and students • Maintains, as fully as possible, the established routines and procedures of the school and classroom to which assigned • Assumes

Aaron Brock, US ARMY | US ARMY

I'm planning on buying a copy of your brothers book, and I'm thinking about getting one for my mom as well. With the situation I'm going through, working on this Warrant Officer Packet, getting some encouragement and solidifying God's calling in my life would be amazing! I appreciate you thinking about me and wanting me to gain some spiritual encouragement from your brothers book! That's how I know we're of like spirit and faith! Thank you again for everything, I really mean that. Read more: http://www.the-power-of-restoring.com/news/feed-back-e-mail1/

I really love this. I am so proud of your accomplishment. You have come so far. People see the glory but know nothing of the story. Great job; you are truly blessed; more than you know or give yourself credit for but, it is ok. Keep your head up and stay encouraged. More blessings are yet to come. Just be prepared to accept them. Don't entertain the negative or jealousy. You are on God's path where he has been trying to get you. Don't let anyone or anything steer you from that. To God be the glory. His grace and mercy is with you and your family forever. Keep on praising his holy name and giving him the glory. God bless. Read more: http://www.the-power-of-restoring.com/news/feed-back-e-mail/

After author, Rodney Jacobs had snubbed many signs from God to walk in his divine calling, until one day he was severely verbally bullied and humiliated in every way by supervisor for 6 months. Rodney had instantly felt every ounce of life had been ripped out of him that he resulted in him having a nervous breakdown. It was at that moment that Rodney found himself face to face with a wakeup call that forced him to make a heart rendering decision to answer his divine calling. It was then with t

0 to 3000 *Will consider certain engagements for no fee