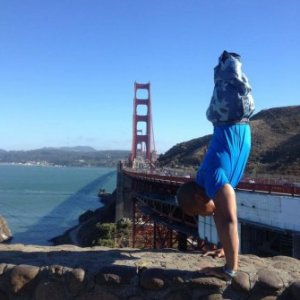 Rohan Murphy, who lost his legs at birth, started to wrestle his freshman year of high school. After a successful high school wrestling career he went on to wrestle at Penn State University. In addition to wrestling, Murphy is also an accomplished powerlifter, competing in international competitions all over the world representing the USA.

Rohan has been featured in publications such as ABC news, Sports Illustrated, and many more. He was even featured in his very own Nike commercial to motivate and inspire people to exercise and live a healthy lifestyle.

In November of 2010 Rohan Murphy founded CatchSpark.com. CatchSpark.com is an inspirational and motivational community that connects you with inspiring people, friends and family. Catchspark.com connects people through challenges, stories, quotes, videos, and more while earning sparks along the way. CatchSpark.com asks you one simple question. What’s inspiring you today?

Now Rohan is a professional motivational speaker. He lived his whole life motivating people by his actions, he is now motivating the youth of America by his words. Rohan’s life story is a gripping tale of adversity, dedication, and living life with a purpose.

“I had the opportunity to hear Rohan Murphy address several Husker teams and was very impressed with his sincerity, passion, humor and candor. His story is one of perseverance, self-belief, sacrifice, work-ethic and determination. His real life story is a perspective changer as certainly we all face challenges, obstacles and adversity, most of which would pale in comparison to what Rohan has endured and overcome. Rohan has proven that ‘anything is possible’ and I believe his message made a memorable impact on our student-athletes that will motivate and inspire them to greater success.”

Please accept this letter as my recommendation and endorsement for the incredible assembly you brought to my school this fall. Rohan Murphy was the most outstanding speaker I have ever had the privilege to hear in my over twenty seven year career as an educator. I have never seen a young man capture the hearts and minds of over two thousand people assembled in a gymnasium for almost an hour. It was an unbelievable experience! You contacted me in July to let me know Rohan was coming to Nebraska. While I had not heard, about him you gave me just enough information to rouse my curiosity. I am a high school principal who is always looking for that next great opportunity for our staff and students. I was so excited when I began searching

I have been teaching for close to 30 years Rohan, this was one of the best days of my career. You have such a presence and grace about you when you speak. To be able to command the attention of 650 students was a testament to your skills as a speaker. I think that for many of our students who feel powerless, you made them feel empowered. I would be happy to recommend you to any agency, school or corporation. Feel free to contact us anytime as a reference if needed. Your message is so needed in today's world of instant gratification people have forgotten what drive, determination and attitude can do. All my best, Bernadette Kraljic

No Legs, No Problem