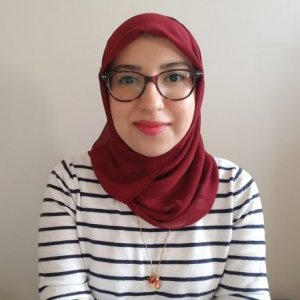 Ruba Ali Al-Hassani is a doctoral candidate at Osgoode Hall Law School, York University, with a Masters Degree in Criminology from the University of Toronto, and a Masters in Law from Osgoode Hall Law School. In addition to teaching Sociology at York University, Ruba has returned as a sessional instructor at her alma mater, Trent University, where she had majored in Psychology and Sociology. Ruba is an interpreter for the International Refugee Assistance Project, a regional representative of the Iraqi Cooperative Orphan Aid Foundation, and a co-founder of the Canadian Association of Muslim Women in Law. She also sits on the Boards of the Canadian National Alopecia Areata Foundation and of the Canadian Centre for Victims of Torture. Her research interests include Iraqi studies, the Sociology of law, racial profiling, and terrorism studies.

Currently working towards the Ph.D.

"This year [2016], MALA is spotlighting individual stories from men and women who take a stand to eliminate violence against women, both nationally and globally. Our community looks forward to supporting UN Women’s Orange the World Campaign to support efforts to end violence against women and girls worldwide. UN Women and partners around the world are marking the 16 Days of Activism Against Gender-Based Violence, launching from International Day for the Elimination of Violence against Women on November 25th until UN’s International Human Rights Day on December 10th."

Canada's Muslims embrace their country – even when it doesn't embrace back

Did an interview with The Christian Science Monitor and spoke on behalf of the Canadian Association of Muslim Women in Law. In this interview, I addressed the rise of Islamophobia in Canada.

Interview with Press TV, where the displacement of thousands of civilians from Mosul, Iraq, is discussed.

An interview with Press TV, where the aftermath of the Quebec mosque shooting was discussed.

Interview with Press TV, where the Trump administration immigration/Muslim ban was discussed

An interview with Press TV, which discussed Donald Trump's inauguration, and hate crimes/rhetoric across the US and Canada.

An interview with Press TV, in which the Iraqi operation to liberate Mosul from ISIS was discussed.

An interview with Press TV discussed the final stages of the Iraqi operation to liberate Mosul from ISIS.

An interview with BBC World Service Radio discusses the tragic bombing in Karradah, Baghdad, which killed over 400 Iraqi civilians, and the aftermath.

The Environics Survey of Muslims in Canada 2016”

An interview on behalf of the Canadian Association of Muslim Women in Law with Vancouver's Co-op Radio discussed the Environics Survey of Muslims in Canada, as well as Muslim sentiments regarding discrimination, representation, and identity.

An interview with CHIN Radio Ottawa addressed the lack of a solid and open discourse around mental health in the Arab and Muslim communities, and what steps must be taken to bring about change.

Stories told through social mobilization for, and understanding of, the Welfare State

Empathy: An Important Step Towards Personal and National Reconciliation

Women’s Bodies, Hair, and Clothing: What’s There to Normalize?

Wahhabism: The Ideology of Hate

The article discusses the anti-Shia sectarianism that has been normalized by, and which guides, international human rights organizations reporting on Iraq.

Iraq's protest movement & slated elections for next June underscore a need to rebuild the public's trust in state institutions & advance accountability. In my first piece for Tahrir Institute for Middle East Policy, I discuss how restorative justice could address such concerns.

From Iraq to Canada: We Want a Homeland

This article discusses the parallels between the October Revolution in Iraq's slogan "We Want a Homeland" and compares it to Wetʼsuwetʼen protests in early 2020, claiming ownership of Native lands.

Corruption and Exploitation of Gender in Iraq (Part I of III)

Casting Out Intersectionality Through Racial Profiling

This paper discussed the importance of redefining the terms commonly used to counter racial profiling in the workspace and policing. It was written for the Ontario Human Rights Commission conference and annual report for 2015-2016.

Too often, developments in Iraq are discussed through the lens of a U.S.–Iran proxy war, quite visibly excluding the voices of Iraqi citizens and protesters demanding political, economic, and social justice. Iraq's October Revolution is a movement that has triggered a turning point in Iraqi history. It has found its place in Iraq’s social consciousness & the battle for state sovereignty.