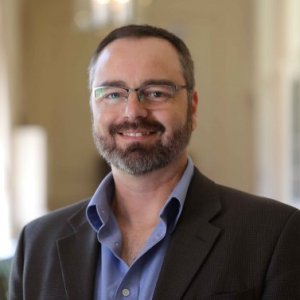 
Dr. King is a Professor of Biology and Directory of the Graduate Program in Biology at Baylor University.

King is interested in determinants of species composition at higher trophic levels in aquatic ecosystems. He is particularly interested in how abiotic stressors and resource subsidies affect structure and function of macroinvertebrate and fish communities in a variety of aquatic habitats. He also uses aquatic biota as indicators of ecological integrity. These distinct but related interests are the basis for much of his past, present and intended future research, including:

• Implications of elemental (e.g., carbon, nitrogen, and phosphorus) imbalances between consumers and their food in aquatic ecosystems (i.e., "ecological stoichiometry")

His research interests span a variety of disciplines, including community and landscape ecology, biogeochemistry, and environmental science and policy. The interdisciplinary nature of his research is attractive to many funding agencies and is particularly well suited for the participation of both undergraduate and graduate students in the field and his laboratory.

Dr. King graduated from Harding University with a bachelor's in biology. He received his master's and Ph.D. from Duke University, in environmental management and ecology, respectively. He was also an ecologist at the Smithsonian Environmental Research Center in Maryland.

Links between stressors and biological responses

Baylor biologist Ryan S. King, Ph.D., is quoted in this article about a coal mine reclamation project in Sulphur Springs, Texas.

Since the mid-1980s, the two states have haggled over the water quality in the Illinois River and numerous other rivers and branches flowing out of Arkansas and into Eastern Oklahoma. Weary after years of continued litigation, both states agreed in 2014 they needed a trusted expert to deliver non-biased scientific evidence that both states would accept to resolve the decades-long dispute. They selected Baylor biology professor Ryan King, PhD, and his research team, with the results finally leading to a resolution late last year. “I was extraordinarily excited to be part of a study that would directly lead to policy,” King said. “We had a clear objective and timeline, and we spent the last two years visiting more than 35 rivers and streams in Oklahoma to determine an acceptable level of phosphorus.”...

"Arkansas planners and environmentalists are waiting to see if Oklahoma will implement recommendations from a study on the level of phosphorus in the Illinois River. Arkansas groups spent about $600,000 on the study using samples from 35 sites over two years. An independent third-party was used to prevent bias, said Ryan S. King, the Baylor University professor who led the study..."

The study's lead investigator on the study, Ryan S. King, Ph.D., professor of biology in Baylor's College of Arts & Sciences, said this research is the first to address atrazine levels as they would "naturally occur in agricultural areas during rainfall runoff events." "Previous studies at this scale have almost exclusively performed static exposures; that is, added atrazine to the water at a constant rate such that the concentration stays the same over time. This does not occur in nature; hence our study using pulsed exposures is far more appropriate for assessing the effects of atrazine, or any pesticide for that matter, on aquatic life," King said...

"What is so compelling is that we found many different types of organisms are lost downstream of surface coal mines, and most of them begin to disappear at similar levels of mining," said Ryan S. King, associate professor of biology at Baylor. "Our analysis shows that coal mining is leading to widespread declines in aquatic biodiversity in Appalachian streams."...

"The findings are alarming and imply that water quality in streams is degraded rapidly with relatively low levels of development, which clearly has significant implications to the organisms that live in these streams," said study co-author Dr. Ryan King, associate professor of biology at Baylor. "Perhaps of even greater concern is that the decline of stream-dwelling animals implies that there is chemical pollution that could also be detrimental to human health via groundwater and downstream drinking water supplies. It is unlikely that it's just the rapid runoff of water from the impervious cover that is causing the loss of biodiversity, but more likely that chemical pollution is also responsible."...

2016 Climate change is predicted to increase the frequency and magnitude of extreme weather events. Such events coupled with demand for fresh water to support rapidly growing cities may reduce flow permanence and threaten stream biodiversity. We examined the role that flow permanence and urbanization play in limiting stream biodiversity in the Austin, Texas, USA, metropolitan area. We contrasted responses of macroinvertebrate communities to impervious cover (IC) among streams spanning a wide range of flow permanence using long-term biomonitoring and discharge data collected across 104 sites. The number of Ephemeroptera, Plecoptera, and Trichoptera taxa significantly and independently declined with increasing IC and decreasing flow permanence. However, the decline in the number of all taxa as flow permanence decreased depended on the level of IC. Higher IC levels were associated with disproportionately greater declines in taxon richness. Threshold Indicator Taxa ANalysis (TITAN) further parsed the community response by identifying 49 taxa that sharply declined in density and frequency of occurrence primarily between 3.7 and 24% IC. However, when the analysis was repeated after splitting the data into 2 groups of high and low flow permanence, the range of IC resulting in sharp density declines was lower for the low-flow-permanence group (3–11% IC, greatest change at 9% IC) than the high-flow-permanence group of streams (7.7–28% IC, greatest change at 23% IC). Despite being composed of taxa largely regarded as pollution tolerant, the low-flow-permanence group of streams was characterized by taxa that evolved in habitats with intermittent flow and are integral components of their biological integrity. These results imply that future urban growth may have disproportionately negative effects on streams forecasted to become increasingly intermittent consequent to climate change.

How Many Mountains Can We Mine? Assessing the Regional Degradation of Central Appalachian Rivers by Surface Coal Mining

2012 Surface coal mining is the dominant form of land cover change in Central Appalachia, yet the extent to which surface coal mine runoff is polluting regional rivers is currently unknown. We mapped surface mining from 1976 to 2005 for a 19,581 km2 area of southern West Virginia and linked these maps with water quality and biological data for 223 streams. The extent of surface mining within catchments is highly correlated with the ionic strength and sulfate concentrations of receiving streams. Generalized additive models were used to estimate the amount of watershed mining, stream ionic strength, or sulfate concentrations beyond which biological impairment (based on state biocriteria) is likely. We find this threshold is reached once surface coal mines occupy >5.4% of their contributing watershed area, ionic strength exceeds 308 μS cm–1, or sulfate concentrations exceed 50 mg L–1. Significant losses of many intolerant macroinvertebrate taxa occur when as little as 2.2% of contributing catchments are mined. As of 2005, 5% of the land area of southern WV was converted to surface mines, 6% of regional streams were buried in valley fills, and 22% of the regional stream network length drained watersheds with >5.4% of their surface area converted to mines.

2012 The authors performed a multiple-pulsed atrazine experiment to measure responses of autotrophic endpoints in outdoor stream mesocosms. The experiment was designed to synthetically simulate worst-case atrazine chemographs from streams in agricultural catchments to achieve 60-d mean concentrations of 0 μg/L (control), 10 μg/L, 20 μg/L, and 30 μg/L. The authors dosed triplicate streams with pulses of 0 μg/L, 50 μg/L, 100 μg/L, and 150 μg/L atrazine for 4 d, followed by 7 d without dosing. This 11-d cycle occurred 3 times, followed by a recovery (untreated) period from day 34 to day 60. Mean ± standard error 60-d atrazine concentrations were 0.07 ± 0.03 μg/L, 10.7 ± 0.05 μg/L, 20.9 ± 0.24 μg/L, and 31.0 ± 0.17 μg/L for the control, 10-μg/L, 20-μg/L, and 30-μg/L treatments, respectively. Multivariate analyses revealed that periphyton and phytoplankton community structure did not differ among treatments on any day of the experiment, including during the atrazine pulses. Control periphyton biomass in riffles was higher immediately following the peak of the first atrazine pulse and remained slightly higher than some of the atrazine treatments on most days through the peak of the last pulse. However, periphyton biomass was not different among treatments at the end of the present study. Phytoplankton biomass was not affected by atrazine. Metaphyton biomass in pools was higher in the controls near the midpoint of the present study and remained higher on most days for the remainder of the study. Ceratophyllum demersum, a submersed macrophyte, biomass was higher in controls than in 20-μg/L and 30-μg/L treatments before pulse 3 but was not different subsequent to pulse 3 through the end of the present study. Maximum daily dissolved oxygen (DO, percentage of saturation) declined during each pulse in approximate proportion to magnitude of dose but rapidly converged among treatments after the third pulse. However, DO increased in controls relative to all atrazine treatments during the last 17 d of the experiment, likely a result of metaphyton cover in the pools...

How novel is too novel? Stream community thresholds at exceptionally low levels of catchment urbanization.

2011 Novel physical and chemical conditions of many modern ecosystems increasingly diverge from the environments known to have existed at any time in the history of Earth. The loss of natural land to urbanization is one of the most prevalent drivers of novel environments in freshwaters. However, current understanding of aquatic community response to urbanization is based heavily upon aggregate indicators of community structure and linear or wedge-shaped community response models that challenge ecological community theory. We applied a new analytical method, threshold indicator taxa analysis (TITAN), to a stream biomonitoring data set from Maryland to explicitly evaluate linear community response models to urbanization that implicitly assume individual taxa decline or increase at incrementally different levels of urbanization. We used TITAN (1) to identify the location and magnitude of greatest change in the frequency and abundance of individual taxa and (2) to assess synchrony in the location of change points as evidence for stream community thresholds in response to percent impervious cover in catchments. We documented clear and synchronous threshold declines of 110 of 238 macroinvertebrate taxa in response to low levels of impervious cover. Approximately 80% of the declining taxa did so between 0.5% and 2% impervious cover, whereas the last 20% declined sporadically from 2% to 25% impervious cover. Synchrony of individual responses resulted in distinct community-level thresholds ranging from < or = 0.68% (mountains), 1.28% (piedmont), and 0.96% (coastal plain) impervious cover. Upper limits (95% confidence intervals) of community thresholds were < 2% cover in all regions. Within distinct physiographic classes, higher-gradient, smaller catchments required less impervious cover than lower gradient, larger catchments to elicit community thresholds. Relatively few taxa showed positive responses to increasing impervious cover, and those that did gradually increased in frequency and abundance, approximating a linear cumulative distribution...