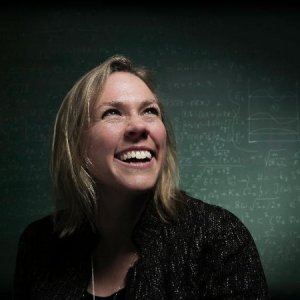 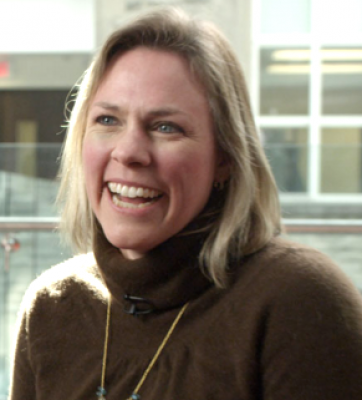 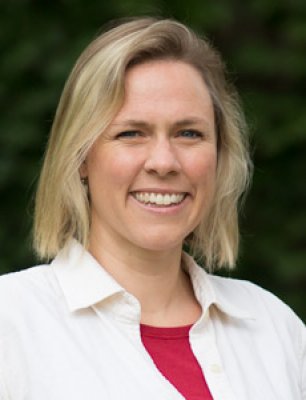 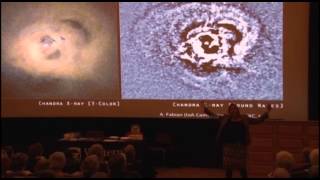 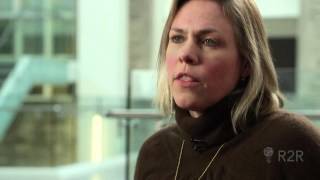 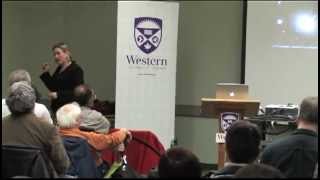 Sarah Gallagher is currently an Associate Professor in the Department of Physics and Astronomyat the University of Western Ontario. Prior to that, she was an Assistant Research Astronomer at the University of California, Los Angeles. In 2006, she completed a Spitzer Postdoctoral Fellowshipentitled Understanding Quasar Outflows: Evolution or Orientation? Her research focuses on investigating the nature of winds from luminous quasars (accreting supermassive black holes at the centers of distant galaxies) using observatories covering the infrared to the X-ray, including two of NASA's Great Observatories, Spitzerand Chandra. Gallagher received her Ph.D. in Astronomy and Astrophysicsfrom Penn Statewhere she was also a member of the Chandra ACIS Instrument team. Her thesis, entitled The View through the Wind: X-ray Observations of Broad Absorption Line Quasars, incorporated X-ray data from three observatories: ROSAT,ASCA,and Chandra. Gallagher spent a year at MITworking with the Chandra X-ray gratings groupbefore going to UCLA in 2003. Before graduate school, she was an undergraduate at Yale Universityand a Physics teacher for two years at the Holderness Schoolwhere she also coached soccer, ran a girls' dormitory, and led winter camping trips.

International Union of Pure and Applied Physics Commission on Astrophysics, 2008

One of these regarded the description of an object collapsing under its own gravitational pull. If the object is sufficiently dense, no force is strong enough to counteract the attraction of gravitation, and it collapses all the way down to a point. According to Einstein’s theory, the endpoint of this collapse is a singularity, which can be described as a ‘tear’ in spacetime. A singularity is often hidden inside a black hole whose size is set as the region where the gravitational pull is so strong that even light cannot escape from it...

Ancient Galaxies Finally Get Together

Four members of the Hickson Compact Group 31 (and also known as NGC 1471), are coming together in a space about 75,000 light-years across — less than the diameter of the much larger Milky Way. "They each have a mass about one-tenth of the Milky Way," says Sarah Gallagher (University of Western Ontario), "so they're on the high-mass side of what would be called dwarf galaxies." Two components, A and C, are the brightest of the bunch. They have a visual magnitude of 13½, putting them within the grasp of a large amateur telescope...

Astronomers Find Dust in the Wind of Black Holes

"Quasars are like the Cookie Monster," said co-author Sarah Gallagher of the University of California at Los Angeles, who is currently a visiting astronomer at the University of Western Ontario, Canada. "They are messy eaters, and they can consume less matter than they spit out in the form of winds."...

On October 28, the “largest collisions in our universe, when galaxies of billions of stars smash together” will be the exciting topic of UCLA post-doctoral researcher Sarah Gallagher’s lecture...

2012 Compact groups, with their high number densities, small velocity dispersions, and an interstellar medium that has not been fully processed, provide a local analog to conditions of galaxy interactions in the earlier universe. The frequent and prolonged gravitational encounters that occur in compact groups affect the evolution of the constituent galaxies in a myriad of ways, for example, gas processing and star formation. Recently, a statistically significant "gap" has been discovered in the mid-infrared (MIR: 3.6-8 μm) IRAC color space of compact group galaxies. This gap is not seen in field samples and is a new example of how the compact group environment may affect the evolution of member galaxies. In order to investigate the origin and nature of this gap, we have compiled a larger sample of 37 compact groups in addition to the original 12 groups studied by Johnson et al. (yielding 174 individual galaxies with reliable MIR photometry). We find that a statistically significant deficit of galaxies in this gap region of IRAC color space is persistent in the full sample, lending support to the hypothesis that the compact group environment inhibits moderate specific star formation rates. Using this expanded sample, we have more fully characterized the distribution of galaxies in this color space and quantified the low-density region more fully with respect to MIR bluer and MIR redder colors. We note a curvature in the color-space distribution, which is fully consistent with increasing dust temperature as the activity in a galaxy increases. This full sample of 49 compact groups allows us to subdivide the data according to physical properties of the groups. An analysis of these subsamples indicates that neither projected physical diameter nor density shows a trend in color space within the values represented by this sample. We hypothesize that the apparent lack of a trend is due to the relatively small range of properties in this sample, whose groups have already been pre-selected to be compact and dense. Thus, the relative influence of stochastic effects (such as the particular distribution and amount of star formation in individual galaxies) becomes dominant. We analyze spectral energy distributions of member galaxies as a function of their location in color space and find that galaxies in different regions of MIR color space contain dust with varying temperatures and/or polycyclic aromatic hydrocarbon emission.

2011 We have produced the next generation of quasar spectral energy distributions (SEDs), essentially updating the work of Elvis et al. by using high-quality data obtained with several space- and ground-based telescopes, including NASA's Great Observatories. We present an atlas of SEDs of 85 optically bright, non-blazar quasars over the electromagnetic spectrum from radio to X-rays. The heterogeneous sample includes 27 radio-quiet and 58 radio-loud quasars. Most objects have quasi-simultaneous ultraviolet-optical spectroscopic data, supplemented with some far-ultraviolet spectra, and more than half also have Spitzer mid-infrared Infrared Spectrograph spectra. The X-ray spectral parameters are collected from the literature where available. The radio, far-infrared, and near-infrared photometric data are also obtained from either the literature or new observations. We construct composite SEDs for radio-loud and radio-quiet objects and compare these to those of Elvis et al., finding that ours have similar overall shapes, but our improved spectral resolution reveals more detailed features, especially in the mid- and near-infrared.

2011 We present Spitzer infrared (IR) spectra and ultraviolet (UV) to mid-IR spectral energy distributions (SEDs) of 25 luminous type 1 quasars at z ~ 2. In general, the spectra show a bump peaking around 3 μm and the 10 μm silicate emission feature. The 3 μm emission is identified with hot dust emission at its sublimation temperature. We explore two approaches to modeling the SED: (1) using the CLUMPY model SED from Nenkova et al. and (2) the CLUMPY model SED and an additional blackbody component to represent the 3 μm emission. In the first case, a parameter search of ~1.25 million CLUMPY models shows that (1) if we ignore the UV-to-near-IR SED, models fit the 2-8 μm region well, but not the 10 μm feature; (2) if we include the UV-to-near-IR SED in the fit, models do not fit the 2-8 μm region. The observed 10 μm features are broader and shallower than those in the best-fit models in the first approach. In the second case, the shape of the 10 μm feature is better reproduced by the CLUMPY models. The additional blackbody contribution in the 2-8 μm range allows CLUMPY models dominated by cooler temperatures (T < 800 K) to better fit the 8-12 μm SED. A centrally concentrated distribution of a small number of torus clouds is required in the first case, while in the second case the clouds are more spread out radially. The temperature of the blackbody component is ~1200 K as expected for graphite grains.

2010 Compact galaxy groups are at the extremes of the group environment, with high number densities and low velocity dispersions that likely affect member galaxy evolution. To explore the impact of this environment in detail, we examine the distribution in the mid-infrared (MIR) 3.6-8.0 μm color space of 42 galaxies from 12 Hickson compact groups (HCGs) in comparison with several control samples, including the LVL+SINGS galaxies, interacting galaxies, and galaxies from the Coma Cluster. We find that the HCG galaxies are strongly bimodal, with statistically significant evidence for a gap in their distribution. In contrast, none of the other samples show such a marked gap, and only galaxies in the Coma infall region have a distribution that is statistically consistent with the HCGs in this parameter space. To further investigate the cause of the HCG gap, we compare the galaxy morphologies of the HCG and LVL+SINGS galaxies, and also probe the specific star formation rate (SSFR) of the HCG galaxies. While galaxy morphology in HCG galaxies is strongly linked to position with MIR color space, the more fundamental property appears to be the SSFR, or star formation rate normalized by stellar mass. We conclude that the unusual MIR color distribution of HCG galaxies is a direct product of their environment, which is most similar to that of the Coma infall region. In both cases, galaxy densities are high, but gas has not been fully processed or stripped. We speculate that the compact group environment fosters accelerated evolution of galaxies from star-forming and neutral gas-rich to quiescent and neutral gas-poor, leaving few members in the MIR gap at any time.

The Infrared Properties of Hickson Compact Groups The Astronomical Journal

2007 Compact groups of galaxies provide a unique environment to study the mechanisms by which star formation occurs amid continuous gravitational encounters. We present 2MASS (JHK) and Spitzer IRAC (3.5-8 μm) and MIPS (24 μm) observations of a sample of 12 Hickson Compact Groups (HCGs 2, 7, 16, 19, 22, 31, 42, 48, 59, 61, 62, and 90) that includes a total of 45 galaxies. The infrared colors of the galaxies in this sample span a range of parameter space, and some trends are apparent in the data. The near-infrared colors of the sample galaxies are largely consistent with being dominated by slightly reddened normal stellar populations. There is also some evidence for a K-band excess in a few cases, which likely indicates the presence of hot dust at or near the sublimation temperature associated with active galactic nuclei or star formation activity. Galaxies that have the most significant polycyclic aromatic hydrocarbon and/or hot dust emission (as inferred from excess 8 μm flux) also tend to have larger amounts of extinction and/or K-band excess and stronger 24 μm emission, all of which suggest ongoing star formation activity. We separate the 12 HCGs in our sample into three types based on the ratio of the group H I mass to dynamical mass. We find evidence that galaxies in the most gas-rich groups tend to be the most actively star forming. Galaxies in the most gas-poor groups tend to be tightly clustered around a narrow range in colors consistent with the integrated light from a normal stellar population. We interpret these trends as indicating that galaxies in gas-rich groups experience star formation and/or nuclear actively until their neutral gas is consumed, stripped, or ionized. The galaxies in this sample exhibit a "gap" between gas-rich and gas-poor groups in infrared color space that is sparsely populated and not seen in the Spitzer First Look Survey sample. This gap may suggest a rapid evolution of galaxy properties in response to dynamical effects. These results suggest that the global properties of the groups and the local properties of the galaxies are connected.