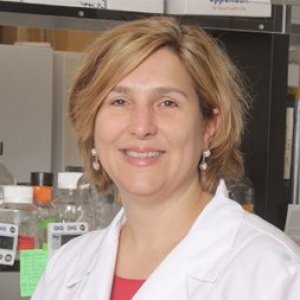 Professor of Pharmacology and Pharmaceutical Sciences | USC School of Pharmacy


Sarah F. Hamm-Alvarez is an expert in drug delivery for eye diseases.

Dr. Hamm-Alvarez received a B.A. in chemistry from Carleton College in 1986 and a Ph.D. in biochemistry from Duke University in 1990. After completing a 3-year postdoctoral fellowship in cell biology at Duke University, she joined the faculty in the Department of Pharmaceutical Sciences at the University of Southern California as an Assistant Professor in 1993. Dr. Hamm-Alvarez has joint appointments in the Departments of Physiology and Biophysics and Ophthalmology in the Keck School of Medicine.

Her research program focuses on characterization of membrane trafficking events facilitating regulated secretion of proteins through transcytosis and exocytosis in epithelial cells, as well as endocytosis of macromolecules and ligands. A particular area of emphasis is the elucidation of processes that mediate the sorting, packaging and release of tear proteins by the acinar cells of the lacrimal gland. A significant emphasis of her work is the discovery of the pathological changes in membrane trafficking mechanisms in lacrimal gland acinar cells that may contribute to the autoimmune dacryadenitis characteristic of Sjögren’s syndrome. This work, ranging from fundamental cell biology, to animal, and to clinical studies, has led to the discovery of putative tear biomarkers for identification of Sjögren’s syndrome patients with early stage disease. Her group is also working on novel drug delivery strategies for targeting of immunomodulatory agents to lacrimal gland and ocular surface tissues utilizing protein-based targeting of nano particles. Finally, her work on pathological changes in exocrine tissue in Sjögren’s syndrome has identified potential additional targets for drug therapy, which have opened up the potential to explore the efficacy of a variety of new therapeutic agents for treatment of autoimmune exocrinopathy. Her research program is associated with extensive usage of high resolution molecular imaging techniques including confocal and multiphoton microscopy, intravital microscopy, electron microscopy as well as histology and other biochemical techniques (membrane fractionation, molecular biology) for studying intracellular trafficking processes.

“Changes are more pronounced and have a stronger increase ... when we measure in reflex tears,” principal investigator Sarah F. Hamm-Alvarez, PhD, told Healio.com/OSN.

"Despite the prevalence of the disease, how the disease starts and develops is not well-understood, says Sarah Hamm-Alvarez, PhD, vice chair of basic research and professor of ophthalmology at the USC Roski Eye Institute and lead investigator of this study."

2019 Elastin-Like Polypeptides (ELP) are environmentally responsive protein polymers which are easy to engineer and biocompatible, making them ideal candidates as drug carriers. Our team has recently utilized ELPs fused to FKBP12 to carry Rapamycin (Rapa), a potent immunosuppressant. Through high affinity binding to Rapa, FKBP carriers can yield beneficial therapeutic effects and reduce the off-site toxicity of Rapa. Since ICAM-1 is significantly elevated at sites of inflammation in diverse diseases, we hypothesized that a molecularly targeted ELP carrier capable of binding ICAM-1 might have advantageous properties. Here we report on the design, characterization, pharmacokinetics, and biodistribution of a new ICAM-1-targeted ELP Rapa carrier (IBPAF) and its preliminary characterization in a murine model exhibiting elevated ICAM-1. Lacrimal glands (LG) of male NOD mice, a disease model recapitulating the autoimmune dacryoadenitis seen in Sjögren’s Syndrome patients, were analyzed to confirm that ICAM-1 was significantly elevated in the LG relative to control male BALB/c mice (3.5-fold, p < 0.05, n = 6). In vitro studies showed that IBPAF had significantly higher binding to TNF-α-stimulated bEnd.3 cells which overexpress surface ICAM-1, relative to nontargeted control ELP (AF)(4.0-fold, p < 0.05). A pharmacokinetics study in male NOD mice showed no significant differences between AF and IBPAF for plasma half-life, clearance, and volume of distribution. However, both constructs maintained a higher level of Rapa in systemic circulation compared to free Rapa. Interestingly, in the male NOD mouse, the accumulation of IBPAF was significantly higher in homogenized LG extracts compared to AF at 2 h (8.6 ± 6.6% versus 1.3 ± 1.3%, respectively, n = 5, p < 0.05). This accumulation was transient with no differences detected at 8 or 24 h. This study describes the first ICAM-1 targeted protein–polymer carrier for Rapa that specifically binds to ICAM-1 in vitro and accumulates in ICAM-1 overexpressing tissue in vivo, which may be useful for molecular targeting in diverse inflammatory diseases where ICAM-1 is elevated.

2019 The USFDA-approved immunosuppressive drug rapamycin (Rapa), despite its potency, is limited by poor bioavailability and a narrow therapeutic index. In this study, we sought to improve bioavailability of Rapa with subcutaneous (SC) administration and to test its therapeutic feasibility and practicality in a murine model of Sjögren’s syndrome (SS), a systemic autoimmune disease with no approved therapies. To improve its therapeutic index, we formulated Rapa with a carrier termed FAF, a fusion of the human cytosolic FK506-binding protein 12 (FKBP12) and an elastin-like polypeptide (ELP). The resulting 97 kDa FAF (i) has minimal burst release, (ii) is “humanized”, (iii) is biodegradable, (iv) solubilizes two Rapa per FAF, and (v) avoids organic solvents or amphiphilic carriers. Demonstrating high stability, FAF remained soluble and monodisperse with a hydrodynamic radius of 8 nm at physiological temperature. A complete pharmacokinetic (PK) analysis of FAF revealed that the bioavailability of SC FAF was 60%, with significantly higher blood concentration during the elimination phase compared to IV FAF. The plasma concentration of Rapa delivered by FAF was 8-fold higher with a significantly increased plasma-to-whole blood ratio relative to free Rapa, 24 h after injection. To evaluate therapeutic effects, FAF–Rapa was administered SC every other day for 2 weeks to male non-obese diabetic (NOD) mice, which develop an SS-like autoimmune-mediated lacrimal gland (LG) inflammation and other characteristic features of SS. Both FAF–Rapa and free Rapa exhibited immunomodulatory effects by significantly suppressing lymphocytic infiltration, gene expression of IFN-γ, MHC II, type I collagen and IL-12a, and cathepsin S (CTSS) activity in LG compared to controls. Serum chemistry and histopathological analyses in major organs revealed no apparent toxicity of FAF–Rapa. Given its improved PK and equipotent therapeutic efficacy compared to free Rapa, FAF–Rapa is of further interest for systemic treatments for autoimmune diseases like SS.

2019 To evaluate whether the protein composition of reflex tears differs in individuals with Parkinson’s disease (PD) versus Healthy Controls (HC).

2019 Chronic Obstructive Pulmonary Disease (COPD) is a recognized global health crisis, with smoking the most important and well-studied risk factor for disease development and progression (1). The World Health Organization (WHO) estimates that 80 million individuals live with moderate to severe COPD, and this disease will become the third leading cause of death worldwide by 2030 (https://www. who. int/respiratory/copd/en/). COPD is characterized by chronic inflammation and obstructed airflow usually originating with long term exposure to particulates, with the most egregious offender being cigarette smoke. Various signaling pathways are implicated in the induction of lung inflammation associated with COPD pathogenesis.