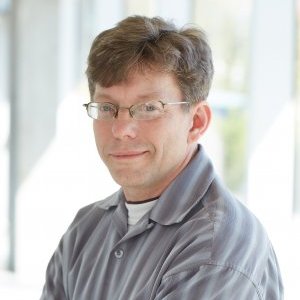 Identifying and investigating real-world problems from a mathematical perspective is all in the formulation of the question. Associate Professor of Mathematics in the Faculty of Science, Sean Bohun, PhD, has an innate ability to peel back and extract well-posed problems, then critically structure his thinking to develop industry-relevant solutions.

One of Canada’s most influential and respected Applied Mathematicians, Dr. Bohun’s contributions to the field span over two decades developing innovative solutions to a wide range of mathematical problems including mineral processing, tissue engineering and scheduling. In recognition of his exceptional leadership and achievements, he was awarded the prestigious 2015 CAIMS Fields Industrial Mathematics Prize, raising Canada’s global profile in industrial mathematics expertise.

Dr. Bohun’s latest research focuses on mathematical modelling in the biomedical, transportation and technology industries. He is working on mathematical solutions to increase the signal strength in tunable lasers; extend the rotating disk technique for oil companies to measure and characterize rock formations; use magnetic force for scaffold colonization of stem cells; and predict and account for the distortion of extremely thin glass sheets used in electronics. His interdisciplinary research even branches into sociology by exploring ways to model how people interact with one another. Internationally, he is collaborating with researchers at the University of Oxford to develop imaging techniques using the world’s fastest camera by examining where the exploded fragments settle, then reconstructing the molecules to see the chemical reactions in real time, a technique known as coulomb explosion imaging of molecules.

He completed his Bachelor of Science in Physics, earned his Master of Science in Theoretical Physics, and received his Doctorate in Mathematics with a Specialization in Applied Mathematics, all at the University of Victoria. He spent five years as an Assistant Professor of Mathematics at Penn State University, and co-authored Mathematical Modelling: a Case Studies Approach, before moving back to Canada to join UOIT in 2006. Appointed Undergraduate Program Director in 2014, his teaching concentrates on modelling and industrial math across sciences and other disciplines. For the past decade he has served as an Adjunct Professor in the Department of Mathematics and Statistics at York University.

Dr. Bohun received this award for his invaluable contributions to the Canadian industrial mathematics community beyond any normal measures, in particular as an organizer and participant of nearly every Industrial Modelling Workshop held in Canada, since their inception in 1998, and for his role as founding editor of ICIAM’s newsletter Dionia.

In this role, Dr. Bohun supervises the research of graduate students.

Martha A. Fisher Award for Excellence in Teaching (professional)

As an Assistant Professor of Mathematics at Penn State, Dr. Bohun received this honour for excellence in teaching.

For nearly two decades, University of Ontario Institute of Technology (UOIT) researcher Dr. Sean Bohun has been considered by his peers to be one of Canada’s most influential applied mathematicians. His contributions in the field include developing solutions in a wide range of mathematical problems including mineral processing, tissue engineering and scheduling. In recognition of his outstanding record of achievement, the Canadian Applied and Industrial Mathematics Society (CAIMS) has named the UOIT Faculty of Science Associate Professor as the winner of the 2015 CAIMS-Fields Prize in Industrial Mathematics. This prize is awarded to a researcher in recognition of exceptional research in any branch of industrial mathematics, interpreted broadly.

For the last few years the City of Toronto has proven to be a very complex political arena. With election day (Monday, October 27) drawing closer, voters are getting a steady diet of mayoral candidate poll results – tallies which are often contradictory and perhaps serve to sustain the rhythmic beat of political rhetoric. Dr. Sean Bohun, an applied mathematics researcher at the University of Ontario Institute of Technology (UOIT), argues methodologies that fail to take modern technology into account may significantly skew the end results of the number crunching process.

The Mathematics of Fear and its Role in Social Change, CAIMS Prize Winners Lecture

The Mathematics Underlying the Carbonate System

A Math/Chemistry Mashup: The Mathematics Underlying the Carbonate System

Scale-Up Issues for the Acheson Process

The Modelling, Analysis and Optimization of Natural Processes Characterized by a Conﬂuence of Partial Differential Equations of Differing Type

Many modern physical processes in the natural sciences and engineering fields are the result of the unique set of circumstances that occurs when materials with differing properties and behaviours are brought into contact, and the resulting boundary is allowed to evolve in time. The primary objective of this five-year research program is to develop an understanding of the mathematical structure that underpins this class of problems in the effort to either impart some control over the associated processes, or achieve some form of optimality.

Femtosecond laser-induced Coulomb-explosion imaging of 3,5-dibromo-3,5-diﬂuoro-4-cyanobiphenyl molecules prealigned in space is explored using a pixel-imaging mass-spectrometry (PImMS) camera. The fast-event-triggered camera allows the concurrent detection of the correlated two-dimensional momentum images, or covariance maps, of all the ionic fragments resulting from fragmentation of multiple molecules in each acquisition cycle. Detailed simulation of the covariance maps reveals that they provide rich information about the parent molecular structure and fragmentation dynamics. Future opportunities for imaging the real-time dynamics of intramolecular processes are considered.

In this paper, we focus on the process of mass transfer in the rotating disk apparatus formulated as a Stefan problem with consideration given to both the hydrodynamics of the process and the specific chemical reactions occurring in the bulk. The wide range in the reaction rates of the underlying chemistry allows for a natural decoupling of the problem into a simplified set of weakly coupled convective–reaction–diffusion equations for the slowly reacting chemical species and a set of algebraic relations for the species that react rapidly.

When beginning this article one of the most difficult questions I was faced with was to provide a definition of industrial mathematics and to distinguish it from applied mathematics. Applied mathematics is primarily concerned with using mathematics as a tool for analysis. This is quite a broad characterization and encompasses not only what one would typically consider the meat and potatoes of modelling physical phenomena, solving problems and interpreting the results, but also finding connections across disciplines and utilizing the language of mathematics to unify disparate fields of study.

A model for computing thermal stress inside a crystal with facets is presented. Using a systematical perturbation analysis, a semi-analytical thermal-stress solution is obtained for constrained directional growth with small lateral heat flux. This solution can be applied to crystals grown by various growth techniques such as the Czochralski method. The semi-analytical nature of the solution leads to a much more efficient approach for computing thermal stress in crystals with facets, compared to a full 3D simulation. Examples are given for crystals pulled in a variety of seed orientations.