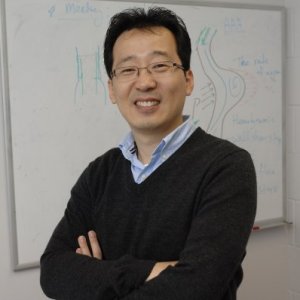 
Dr. Baek is an associate professor in the Department of Mechanical Engineering at Michigan State University.

Dr. Baek is an associate professor in the Department of Mechanical Engineering at Michigan State University. He researches computational modeling of arteries to aid patients in predicting their potential risk and clinical management. Particularly, Baek’s research focuses on aneurysms and pulmonary hypertension, and their applications to biomedical engineering. He supervises research and education activities in the Cardiovascular and Tissue Mechanics Research Laboratory.

Baek’s research group has published more than 50 publications in peer-reviewed journals on topics related to cardiovascular mechanics and tissue engineering. He received the NSF CAREER in 2012 and has received multiple grants from NSF and NIH. Baek received his Ph.D. in Mechanical Engineering in 2003 from Texas A&M University.

The Impact of Prestretch Induced Surface Anisotropy on Axon Regeneration

2016 Nerve regeneration after spinal cord injury requires proper axon alignment to bridge the lesion site and myelination to achieve functional recovery. Significant effort has been invested in developing engineering approaches to induce axon alignment with less focus on myelination. Topological features, such as aligned fibers and channels, have been shown to induce axon alignment, but do not enhance axon thickness. We previously demonstrated that surface anisotropy generated through mechanical prestretch induced mesenchymal stem cells to align in the direction of prestretch. In this study, we demonstrate that static prestretch-induced anisotropy promotes dorsal root ganglion (DRG) neurons to extend thicker axon aggregates along the stretched direction and form aligned fascicular-like axon tracts. Moreover, Schwann cells, when cocultured with DRG neurons on the prestretched surface colocalized with the aligned axons and expressed P0 protein, are indicative of myelination of the aligned axons, thereby demonstrating that prestretch-induced surface anisotropy is beneficial in enhancing axon alignment, growth, and myelination.

2015 While hemodynamic forces and intraluminal thrombus (ILT) are believed to play important roles on abdominal aortic aneurysm (AAA), it has been suggested that hemodynamic forces and ILT also interact with each other, making it a complex problem. There is, however, a pressing need to understand relationships among three factors: hemodynamics, ILT accumulation, and AAA expansion for AAA prognosis. Hence this study used longitudinal computer tomography scans from 14 patients and analyzed the relationship between them. Hemodynamic forces, represented by wall shear stress (WSS), were obtained from computational fluid dynamics; ILT accumulation was described by ILT thickness distribution changes between consecutives scans, and ILT accumulation and AAA expansion rates were estimated from changes in ILT and AAA volume. Results showed that, while low WSS was observed at regions where ILT accumulated, the rate at which ILT accumulated occurred at the same rate as the aneurysm expansion. Comparison between AAAs with and without thrombus showed that aneurysm with ILT recorded lower values of WSS and higher values of AAA expansion than those without thrombus. Findings suggest that low WSS may promote ILT accumulation and submit the idea that by increasing WSS levels ILT accumulation may be prevented.

International Journal of Advances in Engineering Sciences and Applied Mathematics

2016 Blood flow patterns and local hemodynamic parameters have been widely associated with the onset and progression of atherosclerosis in the carotid artery. Assessment of these parameters can be performed noninvasively using cine phase-contrast (PC) magnetic resonance imaging (MRI). In addition, in the last two decades, computational fluid dynamics (CFD) simulation in three dimensional models derived from anatomic medical images has been employed to investigate the blood flow in the carotid artery. This study developed a workflow of a subject-specific CFD analysis using MRI to enhance estimating hemodynamics of the carotid artery. Time-of-flight MRI scans were used to construct three-dimensional computational models. PC-MRI measurements were utilized to impose the boundary condition at the inlet and a 0-dimensional lumped parameter model was employed for the outflow boundary condition. The choice of different viscosity models of blood flow as a source of uncertainty was studied, by means of the axial velocity, wall shear stress, and oscillatory shear index. The sequence of workflow in CFD analysis was optimized for a healthy subject using PC-MRI. Then, a patient with carotid artery stenosis and its hemodynamic parameters were examined. The simulations indicated that the lumped parameter model used at the outlet gives physiologically reasonable values of hemodynamic parameters. Moreover, the dependence of hemodynamics parameters on the viscosity models was observed to vary for different geometries. Other factors, however, may be required for a more accurate CFD analysis, such as the segmentation and smoothness of the geometrical model, mechanical properties of the artery’s wall, and the prescribed velocity profile at the inlet.

2015 For the accurate prediction of the vascular disease progression, there is a crucial need for developing a systematic tool aimed toward patient-specific modeling. Considering the interpatient variations, a prior distribution of model parameters has a strong influence on computational results for arterial mechanics. One crucial step toward patient-specific computational modeling is to identify parameters of prior distributions that reflect existing knowledge. In this paper, we present a new systematic method to estimate the prior distribution for the parameters of a constrained mixture model using previous biaxial tests of healthy abdominal aortas (AAs). We investigate the correlation between the estimated parameters for each constituent and the patient's age and gender; however, the results indicate that the parameters are correlated with age only. The parameters are classified into two groups: Group-I in which the parameters