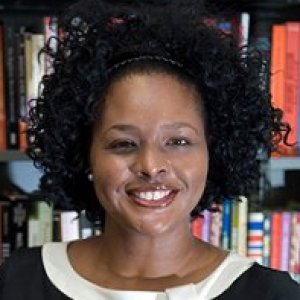 
Expert in socio-political relations, focusing on race in politics

Shayla C. Nunnally is an Associate Professor with a joint appointment in Political Science and Africana Studies Institute. Dr. Nunnally is a summa cum laude graduate from North Carolina Central University. She received her M.A. and Ph.D. in political science at Duke University, and she completed her dissertation as an Erskine A. Peters Fellow in the African and African American Studies Program at the University of Notre Dame. She specializes in public opinion and political behavior, race and politics, African American public opinion and political behavior, and black political development. Her research interests include political socialization, racial socialization, trust, intergroup relations and attitudes, social capital, and collective memory. With funding from a University of Connecticut large faculty grant, she is the principal investigator of a national survey on intergroup attitudes. She is also a research team member with the National Conference of Black Political Scientists for the Cooperative Congressional Election Study (2008 and 2010, Tyson King-Meadows, Principal Investigator) and with the research group for the study of black, white, and Latino political attitudes in the New South (Paula D. McClain, Principal Investigator). Her research has appeared in the Journal of Politics, the Journal of Black Studies, the Du Bois Review, the Journal of African American Studies, and several encyclopedias and edited volumes. She also has a book with New York University Press, Trust in Black America: Race, Discrimination, and Politics (2012), wherein she analyzes black Americans’ public opinion about race, political trust, social trust, and racial trust. Her current research focuses on the transmission of memory across generations and communities of black Americans and what this transmission means for cultural trauma, group remembrance, group politics, and institution-building. She was awarded the 2009 Fannie Lou Hamer Award for Outstanding Community Service by the National Conference of Black Political Scientists. Additionally, in 2009, she was awarded the Outstanding Young Professionals Member for the Eastern Region of the National Urban League. She also was a finalist for the Historically Black Colleges and Universities (HBCU) Media Advocacy’s “2011 HBCU Alumnus/a Award.” Dr. Nunnally teaches courses in race and politics and African American politics.

Awarded by the University of Connecticut Research Foundation

Buttigieg heads into Nevada as a front-runner. Will his lead hold in more diverse states?

It's too early to say whether African American voters are ready to support Buttigieg or, for that matter, Sanders, said Shayla Nunnally, a political science professor at the University of Connecticut and past president of the National Conference of Black Political Scientists.

She said voters in more diverse states could see the early results and decide to act as a firewall against Buttigieg or Sanders. Or, she said, they could see the results as a sign one of the two is worth supporting.

Pete Buttigieg is facing a pivotal moment in his campaign as he returns to South Bend after a police officer fatally shot a black man allegedly wielding a knife, just as the presidential hopeful has been trying to bridge a gap with voters of color.

Buttigieg has shown he's taking the incident seriously by suspending his campaign and meeting with community members, said Shayla Nunnally, a political science professor at the University of Connecticut and president of the National Conference of Black Political Scientists.

Cosby’s sex assault trial has ended with a mistrial. These people believe it’s all a conspiracy.

There are actually a number of conspiracy theories circulating about Cosby and the supposed cause of his troubles, said Shayla Nunnally, a political scientist at the University of Connecticut who researches race, public opinion and political behavior.

“What they have in common is a connection to long-running tropes about the notion of a place for black people in America, a certain set of limits that must be observed or there will be consequences,” Nunnally said. “The idea that there can only be so much success and power. But as wild as those ideas may sound to some people, it’s important to remember that they differ from simple lore or paranoia fed by fake news about power and activity in smoke-filled rooms. These Cosby conspiracies are ideas bolstered by a very real history and experiences which black people, people of color, have every day.”

What Flint Reveals About African Americans and Trust in Government

Typically, all groups, regardless of background, tend to trust state and local governments more than the federal government. However, as political scientist Shayla Nunnally discusses in her book Trust in Black America: Race, Discrimination and Politics, “whites trust local government more than blacks do.” In fact, black people are the least likely to trust their local governments compared to other groups. This makes sense, as discriminatory practices, such as land use decisions or policing tactics like “stop and frisk,” are easily linked to local government actions.

In the wake of Flint, white people nationally are more likely than blacks or Hispanics to be “very confident” that their tap water is safe, while blacks are significantly more likely than whites to think it’s a sign of a more widespread problem.

In Some High School Gyms, The President's Name Is A Taunt

Shayla Nunnally, an associate professor of political science and Africana studies at UConn, said that Trump's campaign featured a return to explicit racial appeals, and that even his name has now become synonymous with animus toward minority communities and policies that would hurt those communities.

"I think there is a certain symbolism there as far as the politics that were a part of this candidate, now president's campaign," she said. People perceive that there is fear among minorities of Trump, Nunnally said.

The United States is becoming more racially and ethnically diverse as a function of immigration, both legal and illegal, from Asia, Mexico, and Latin America. Latinos are the fastest growing population, and in 2000, Latinos replaced African Americans as the largest minority group in the United States. Although much of the media and scholarly attention has focused on demographic changes in traditional Latino immigrant destinations such as California, New Mexico, Texas, and Arizona, the rapid growth in Latino populations is occurring across the nation. The South has undergone a particularly dramatic alteration in terms of racial composition, with six of seven states tripling the size of their Latino populations between 1990 and 2000. This settlement of Latinos in the South is no more than ten to fifteen years old, and new immigrants from Mexico and Latin America are settling in states like North Carolina, Georgia, and Tennessee (Durand, Massey, and Carvet 2000). They bring ethnic and cultural diversity to areas previously defined exclusively as black and white.

Bill Cosby’s controversial remarks at the National Association for the Advancement of Colored People’s (NAACP) 50th Anniversary Commemoration for Brown v. Board of Education questioned the “culture of poverty” among blacks. This paper explores blacks’ support of major themes raised in Cosby’s speech—improving blacks’ parenting of youth, relying less on government to transcend poverty, being contentious of black behavior, and ending out-of-wedlock births among blacks. By analyzing data in an original, national web-based survey of black, Latino, and white public opinion, results indicate most blacks strongly subscribe to several of these themes and often subscribe to them more than non-blacks. Despite class implications for supporting these themes, class indicators do not predict such attitudes. Several themes cohere on one factor, suggesting tenets of black blame.

(Dis)Counting on Democracy to Work: Perceptions of Electoral Fairness in the 2008 Presidential Election Journal of Black Studies

Contemporary discourse about Black Americans questions the loyalties of younger Blacks to the advancement of the Black racial group. This discourse often compares the commitment of Black Americans who came of age during the Civil Rights Movement era to those who came of age during the post-Civil Rights Movement era. Fueling this discourse is a working assumption that somehow younger Black Americans have a different understanding about race and its role in Blacks' political interests. This begs the question whether there are generational differences in the ways that Black Americans learn about race, or racial socialization, perhaps with implications for distinct value orientations about Black politics. Using public opinion data from an original survey, the 2007 National Politics and Socialization Survey (NPSS), this paper compares the racial socialization experiences of four generations of Black Americans—(1) World War II generation (age 67 and older, born in and before 1940); (2) civil rights generation (ages 54–66, born 1953–1941); (3) mid-civil rights generation (ages 43–53, born 1964–1954); and (4) post-civil rights generation Black Americans (age 42 and under, born 1965 and after). Results of ordered probit regression analyses indicate minimal generational differences. Differences emerge in emphases on racial socialization messages about Black public behavior, Black intraracial relations, Black interracial relations, and composite factor loadings of Black consciousness and Black protectiveness messages.

Dawson (1994) submits Black linked fate is a major predictor of Black political behavior. This theory conjectures that the experiences of African Americans with race and racial discrimination in the United States unify their personal interests under a rubric of interests that are best for the Black racial group. With increasing Black ethnic diversity in the United States, however, it becomes important to ascertain how African Americans perceive linkages across Black ethnic groups. This study examines African Americans' linkages with West Indian and African peoples in the United States, referred to here as diasporic linked fate. The study tests the influence of parent-child, intra-racial socialization messages on these linkages. Results suggest that, while a majority of African Americans acknowledge Black linked fate, they distinguish these linkages based on ethnicity and have more tenuous linkages with West Indians and Africans in the United States. While intra-racial socialization messages offer some import in explaining perceived differences in Black ethnic groups' living experiences, more frequent experiences with racial discrimination, and membership in a Black organization offer more import in explaining diasporic linked fate.