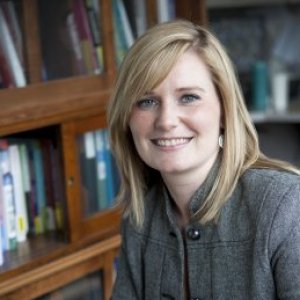 
Expert in reading and literacy in early and middle childhood education.

Shayne Piasta is associate professor of Reading and Literature in Early and Middle Childhood in the Department of Teaching and Learning. She also is a faculty associate for the Crane Center for Early Childhood Research and Policy. Her research focuses on early literacy development and how it is best supported during preschool and elementary years. Her work emphasizes the use of rigorous empirical methods to identify and validate educational programs and practices, such as experimental evaluation of specific curricula and professional development opportunities. She also is interested in identifying teacher, classroom and other factors associated with children’s literacy gains.

Shayne Piasta, associate professor of teaching and learning, is one of two U.S. education researchers, and the only professor from Ohio State, honored by President Barack Obama with the 2017 Presidential Early Career Award for Scientists and Engineers (PECASE). The award is the highest honor given by the U.S. government to science and engineering professionals in the early stages of their research careers, according to a statement from The White House. “I am really grateful for the recognition,” Piasta said. “It speaks to the growing attention and recognition of how important the early education research is that I and many others have been doing.” Piasta is one of 102 scientists nationwide who received the presidential award. Established by President Bill Clinton in 1996, the awards highlight the key role that American innovation plays to grow the economy and tackle the greatest challenges facing the country.

Checking online safety inspection reports with the state should also be a priority for parents. They also should look to see how daycare staff interacts with kids, said Shayne Piasta, an assistant professor at Ohio State University who works with the college’s center for early childhood research. “It’s important that we’re focusing on the quality; we have an accumulating body of evidence that shows how important early childhood years are for kids’ learning and development,” Piasta said. “I would want to see adults (at daycares) being actively engaged with the children, talking with them, having conversations, being supportive.”

"What they would do is that they would put a child on their parent's lap, and then they would use some special equipment that allows them to pinpoint exactly where the children are looking at any given moment in time," says Shayne Piasta, a professor at Ohio State University. They found that when you simply read a book to kids, they tend to ignore the print on the page. More than 90 percent of the time the children are focusing on the pictures, or they are looking up at the parent, she says.

Parents who point out words and letters to their children as they read aloud boost the youngsters' reading skills when they are older, according to a new study. Showing capital letters and how you read from left to right and top to bottom of the page also improves the childrens' spelling and language comprehension skills. "By showing them what a letter is and what a letter means, and what a word is and what a word means, we're helping them to crack the code of language and understand how to read," said Shayne Piasta, an assistant professor of teaching and learning who led the study. Under-fives who were taught to read this way developed more advanced reading skills one and even two years down the line compared to kids who didn't. Researchers claim this is the first time a study has shown a link between referencing during reading and literary achievement in later life. An earlier study showed untrained teachers referenced 8.5 times per reading session compared to 36 times for those who were trained.

Efficacy of the BrightStart! Program for Promoting the Emergent Literacy Skills of PreKindergarten Children At Risk for Reading Difficulties

Preschool Teachers’ Use of Assessment Data

A Data-Driven Approach to Kindergarten Readiness and the Importanceof the Preschool Years: A Partnership Between Researchers and Stakeholders

Preschoolers' Reading Skills Benefit From One Modest Change By Teachers

A small change in how teachers and parents read aloud to preschoolers may provide a big boost to their reading skills later on, a new study found. That small change involves making specific references to print in books while reading to children – such as pointing out letters and words on the pages, showing capital letters, and showing how you read from left to right and top to bottom on the page. Preschool children whose teachers used print references during storybook reading showed more advanced reading skills one and even two years later when compared to children whose teachers did not use such references. This is the first study to show causal links between referencing print and later literacy achievement. “Using print references during reading was just a slight tweak to what teachers were already doing in the classroom, but it led to a sizeable improvement in reading for kids,” said Shayne Piasta, co-author of the study and assistant professor of teaching and learning at Ohio State University. “This would be a very manageable change for most preschool teachers, who already are doing storybook reading in class. ”