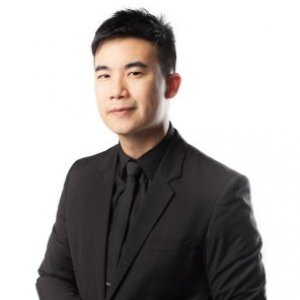 
13-time TEDx speaker & performer, and storyteller who focuses on anti-Asian racism. Founder/bassist of The Slants and The Slants Foundation.

Simon Tam believes that apathy is not compatible with love. His passion for the intersection of arts and activism is evident in all of his work, from his music to his writing. He believes in changing the culture by transforming systems and fighting for equity.

Simon may best be known for winning a landmark case in 2017 that helped expand civil liberties for minorities, unanimously, at the Supreme Court of the United States (Matal v. Tam). He is the founder and bassist of The Slants, one of the first all-Asian American dance rock bands in the world, and also leads The Slants Foundation, a nonprofit organization that provides resources and mentorship for artists that incorporate activism into their work.

As a speaker, Tam has appeared at thousands of events across four continents, and is a regular at key industry events such as TEDx, SXSW, and INTA. Each year he speaks to Fortune 500 companies, universities, and many of the world's top leaders in law, entertainment, and education. He has consulted world leaders and major organizations on policies related to equity, diversity, and inclusion. In 2016, Simon joined President Barack Obama, George Takei, Jeremy Lin, and other celebrities in the #ActToChange campaign to fight bullying.

Simon's work has been highlighted in media features around the world, the New York Times, the Washington Post, Rolling Stone, and The Daily Show with Trevor Noah. He has earned many accolades for his work, including: The Mark T. Banner award from the American Bar Association, the Hugh M Hefner First Amendment Award, Milestone Case of the Year from Managing IP Magazine, the Ovation Lifetime Achievement Award, and the Distinguished Alum Award from Marylhurst University.

In 2019, he published his memoir, "Slanted: How an Asian American Troublemaker Took on the Supreme Court." It was named One of the Best Books on the Constitution of All Time by BookAuthority and won an award for Best Autobiography/Memoir from the Independent Publisher Book Awards.

Simon Tam continues to fight for justice by serving on multiple nonprofit boards, developing innovative solutions to social problems, and sharing a message of radical optimism.

Diversity & Inclusion in the Workplace

Album of the Year (professional)

Won multiple "Album of the Year" music awards from organizations such as the Willamette Week, Portland Music Awards, RockWired Magazine, AsiaXpress, and many more

Simon’s book, “How to Get sponsorships and Endorsements” reached #15 on Amazon.com’s bestselling books for non-profits and charities within 48 hours of its release.

I have immense respect for the passion and drive that Simon has isn bringing his vision to life and to defend it at every turn. As a marketer he is insightful, inventive and ever in pursuit of viable channels to connect with his audience and retain that connection for the life of his brand. His leadership steers a team of creative individuals who not only share his vision but rally behind it to ensure its success. I have had many opportunities to work with Simon and have appreciated his partnership in events both here in Oregon as well as in NY, Austin and Nashville. I look forward to every opportunity to work with Simon and the ingenuity he brings to the big picture of marketing.

I enjoy working with Simon very much. He has unique and interesting ideas in cross marketing his band on multiple levels that are very effective. He secures endorsements that work well to promote his band. Simon is a very motivated marketing and promotion oriented professional.

Simon is a tremendously talented individual, and, given his strong leadership skills and deep knowledge base in the areas of marketing, promotion, and business development, it is not surprising that he has such a well-established track record of success.

Simon is dedicated to his endeavors, and brings a natural sense of marketing and promotions to his activities. A self-starter and a creative thinker, Simon has a strong talent for problem solving.

Simon is just a rare gem of a human being, plain and simple. I have had the pleasure of knowing him for over 15 years and have worked with him in a variety of creative projects, from music to design and everything in between. A creative guy, intelligent scholar, and a man of integrity and honesty all around. I would recommend him in any situation for anything.

I enjoyed connecting with Simon and his group, The Slants, very motivating group of guys... all about pleasing the fans and making them want more. They have a creative value to them as an indie group and more so as a soon to be major group. Simon was always communicating with me and had reliable feedback. I would love to work with him and his group again and anytime. I wish them the best in their journey to success and if my help is ever needed I will be there for them.

"Seriously loved the presentation! Simon answered the questions before I could ask. Very funny, clear, & practical. "

‘The Slants’ music group battles the US for its name

Feature on AlJazeera America, broadcasted in over 60 million homes

Is calling your Asian-American band The Slants racist?

Activist Simon Tam and a discussion about racism

“The Slants” Suit: Asian-American Band Goes to Court Over Name

Think Out Loud on OPB  radio

Interview on OPB's Think Out Loud over cultural appropriation and Halloween

The Slants Frontman Fights Government To Register His Band's Name

Interview and feature on NPR's All Things Considered

Simon Tam is the founder and bassist of the Slants, which he calls "the world's first and only all-Asian dance rock band." His group has gotten international media attention for its hard-charging music and activism. Tam is also the marketing director for the Oregon Environmental Council. Sierra spoke to him about his work, and about the toy car that reminds him of a friend.

The Case for Allowing Offensive Trademarks

Extended interview about race, identity, and free speech with NPR's "On the Media"

'The Slants' Back in Court Over Band Name Trademark Battle

How to Get a TED Talk

The Innovation of Immigrants

Give Racism a Chance

Trayvon Martin. Ferguson. Asians in the Library. Today, it’s common for people to sweep racism under the rug, as if it were an issue of the past rather than a reality faced by people of color on a daily basis. In the United States, we preach about equality, opportunity, diversity, and fighting for the underdog. Yet, we live in a society that perpetuates systemic racism and oppression in nearly all areas of our life: government policies, education, our communities, and even in our entertainment. For people of color, we’re often subject to microaggressions – everyday indignities or slights, whether intentional or unintentional, that communicates hostile, derogatory, or negative racial slights and insults. Most of the time, those who inflict microaggressions are unaware that they’ve done anything wrong or insensitive at all. When those of us who are targets of these practices explain why something is offensive, we’re told to “lighten up,” to stop being so sensitive, etc., as if we had done something wrong. The conversation is shut down before it even begins because people feel uncomfortable having candid discussions of race and identity. We’re allowing subversive racism to harm the lives of millions of Americans because of this discomfort. But it is time to step up and bring these conversations forward, to give racism a chance to exist so that we can spend more time talking about how to fix it rather than debating its existence. In this workshop, you'll learn how to use data and storytelling to overcome the challenges - whether it is stereotypes about APA's, talking about controversial topics in the news, or handling crude comments from friends, it's important to be empowered and to fight the true evil: racism.