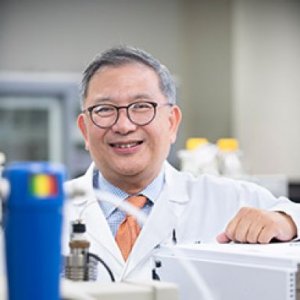 
Stan Gee Louie is a clinical and translational pharmacologist with three decades of clinical and drug development experience. 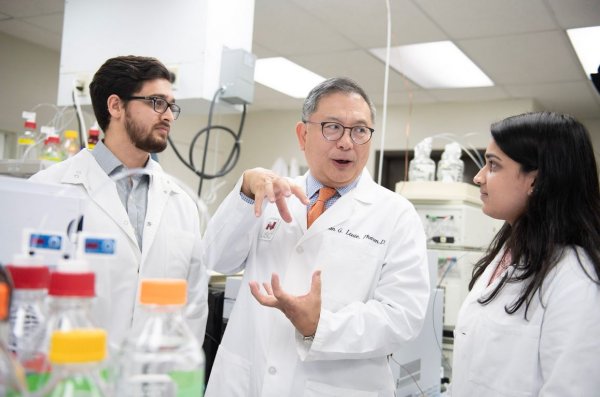 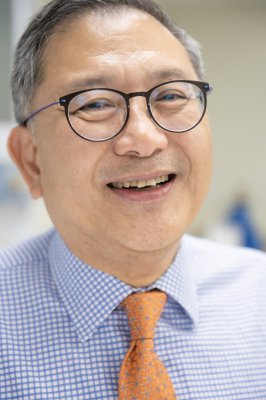 Dr. Stan Louie is a clinical and translational pharmacologist with over three decades of clinical and drug development experience. His research focus has been drug development for inflammatory diseases which include viral infections, cancer, diabetes, traumatic brain injuries, and neurodegenerative diseases. His activities have included dissecting fundamental causes leading to diseases and developing drug therapies to manage these conditions.

A graduate of UCSF in 1987, Dr. Louie continued his clinical training at California Pacific Medical Center (CPMC). After his residency training, Dr. Louie accepted a position at University of Southern California, where he began his academic career investigating cancer therapy and bone marrow transplantation.

He is a translational scientist who advances new chemical and biological candidates through preclinical in vitro and animal evaluation, which ultimately progress these programs into human clinical trials. Currently the leader for the Center in Drug Discovery and Development (CD3) at USC, he is forging efforts to translate basic science discovery into clinical reality. For these efforts, he has developed screening methods for each platform, and developed strategies to iteratively optimize the lead candidates into compounds possessing a balance between maximized stability, safety and pharmacokinetic profile.

His laboratory focuses on drug development for the treatment of virally linked diseases such as HIV and virally linked tumors (e.g. HTLV-linked leukemia, Kaposi's sarcoma). Efforts in the laboratory crosses a number of therapeutic areas include 1) drug development for viral infections and cancer, 2) new chemical entity development targeting cellular adaptive mechanisms such as autophagy and endoplasmic reticulum stress and 3) development of light activated drug (nanocaged) for the treatment of traumatic brain injury and ophthalmologic injury, and 4) modulators of chronic inflammation using bioactive lipids.

Dr. Louie is a member of the National Institute of Health funded AIDS Clinical Trials Group (ACTG) and the Southwest Oncology Group (SWOG). In addition, he is leading the PharmacoAnalytical Laboratory that can provide GLP bioanalytical studies for collaborators who are working on IND enabling studies. Additionally, he is developing clinical biomarkers to evaluate the impact of new therapeutics candidates in humans.

Louie, a clinical and translational pharmacologist with over three decades of clinical and drug development experience, is nationally recognized for his translational research spanning HIV, cancer and neurodegenerative disorders. His laboratory focuses on drug development for the treatment of infections, malignancies (e.g. HTLV-linked leukemia, Kaposi’s sarcoma) and neurodegenerative diseases as well as traumatic brain injury and ophthalmologic injury

Methods, compounds, and compositions for the treatment of angiotensin-related diseases

Methods for treatment of ophthalmic diseases and disorders

Methods and compositions for inducing apoptosis by stimulating ER stress

2008 Inventors: Nicos A. Petasis, Florence M. Hofman, Stan G. Louie, Thomas C. Chen, Axel H. Schonthal The present invention provides a method for inducing apoptosis in selected cells by aggravating ER-stress. The aggravation of ER-stress is achieved in a specific manner by inhibiting SERCA (sarcoplasmic/endoplasmic reticulum calcium ATPase), leading to elevated level of cytoplasmic calcium concentration, yet without inhibiting the activity of COX-2 (cyclooxygenase-2) or triggering the release of histamine. Induction of apoptosis may be enhanced by first inducing or further aggravating ER-stress through inhibition of proteasome or proteases. Also provided are compounds and compositions useful as ER-stress aggravating agents, methods for screening, selecting, identifying and designing the same and methods for treating diseased conditions by inducing apoptosis through specific and selective aggravation of ER-stress.

2019 The USFDA-approved immunosuppressive drug rapamycin (Rapa), despite its potency, is limited by poor bioavailability and a narrow therapeutic index. In this study, we sought to improve bioavailability of Rapa with subcutaneous (SC) administration and to test its therapeutic feasibility and practicality in a murine model of Sjögren's syndrome (SS), a systemic autoimmune disease with no approved therapies. To improve its therapeutic index, we formulated Rapa with a carrier termed FAF, a fusion of the human cytosolic FK506-binding protein 12 (FKBP12) and an elastin-like polypeptide (ELP). The resulting 97 kDa FAF (i) has minimal burst release, (ii) is "humanized", (iii) is biodegradable, (iv) solubilizes two Rapa per FAF, and (v) avoids organic solvents or amphiphilic carriers. Demonstrating high stability, FAF remained soluble and monodisperse with a hydrodynamic radius of 8 nm at physiological temperature. A complete pharmacokinetic (PK) analysis of FAF revealed that the bioavailability of SC FAF was 60%, with significantly higher blood concentration during the elimination phase compared to IV FAF. The plasma concentration of Rapa delivered by FAF was 8-fold higher with a significantly increased plasma-to-whole blood ratio relative to free Rapa, 24 h after injection. To evaluate therapeutic effects, FAF-Rapa was administered SC every other day for 2 weeks to male non-obese diabetic (NOD) mice, which develop an SS-like autoimmune-mediated lacrimal gland (LG) inflammation and other characteristic features of SS. Both FAF-Rapa and free Rapa exhibited immunomodulatory effects by significantly suppressing lymphocytic infiltration, gene expression of IFN-γ, MHC II, type I collagen and IL-12a, and cathepsin S (CTSS) activity in LG compared to controls. Serum chemistry and histopathological analyses in major organs revealed no apparent toxicity of FAF-Rapa. Given its improved PK and equipotent therapeutic efficacy compared to free Rapa, FAF-Rapa is of further interest for systemic treatments for autoimmune diseases like SS.

2019 Pre-exposure prophylaxis (PrEP) with tenofovir disoproxil fumarate-emtricitabine (TDF-FTC) reduces bone mineral density in HIV-uninfected men who have sex with men (MSM). We hypothesized that PrEP with TDF-FTC would increase bone turnover markers (BTMs) at week 24 and that vitamin D supplementation from weeks 24 to 48 would blunt this increase. Participants were from a cohort of 398 MSM and transgender women who received daily TDF-FTC for PrEP. At week 24, a prospective intervention group initiated vitamin D3 4,000 IU daily. Concurrent controls were selected from the cohort who took ≤400 IU/day of vitamin D3 matched by age, race, and body mass index. The primary endpoint was the change in procollagen-I N-terminal propeptide (P1NP) from weeks 24 to 48. Paired t-tests were used to compare changes in BTMs between intervention and controls. Among 48 intervention-control pairs, median age was 33 years. At baseline, 68.9% of the intervention group and 77.3% of controls were vitamin D sufficient (≥20 ng/mL, p = .94). P1NP, C-telopeptide, parathyroid hormone (PTH), and 25-OH vitamin D3 did not increase significantly at week 24. P1NP fell by a mean ± SD of -27.6 ± 49.9 pg/mL from weeks 24 to 48 with vitamin D and -2.5 ± 40.2 pg/mL in controls (p = .01). There were no significant between-group differences in the weeks 24-48 change in C-telopeptide, PTH, or 25-OH vitamin D3. Vitamin D3 supplementation with 4,000 IU/day resulted in a significant reduction in the BTM P1NP compared with controls, suggesting that this intervention has potential to improve bone health during PrEP.

2019 Thirty-nine ARDS patients were enrolled within 24 hours of ARDS diagnosis. Plasma RAS peptide levels were quantified at study entry and 24, 48 and 72 hours using a liquid chromatography-mass spectrometry based metabolomics assay. RAS peptide concentrations were compared between survivors and non-survivors, and were correlated with clinical and pulmonary measures.

2019 Combination anti-retroviral drug therapy (ART) potently suppresses HIV-1 replication but does not result in virus eradication or a cure. A major contributing factor is the long-term persistence of a reservoir of latently infected cells. To study this reservoir, we established a humanized mouse model of HIV-1 infection and ART suppression based on an oral ART regimen. Similar to humans, HIV-1 levels in the blood of ART-treated animals were frequently suppressed below the limits of detection. However, the limited timeframe of the mouse model and the small volume of available samples makes it a challenging model with which to achieve full viral suppression and to investigate the latent reservoir. We therefore used an ex vivo latency reactivation assay that allows a semiquantitative measure of the latent reservoir that establishes in individual animals, regardless of whether they are treated with ART. Using this assay, we found that latently infected human CD4 T cells can be readily detected in mouse lymphoid tissues and that latent HIV-1 was enriched in populations expressing markers of T cell exhaustion, PD-1 and TIGIT. In addition, we were able to use the ex vivo latency reactivation assay to demonstrate that HIV-specific TALENs can reduce the fraction of reactivatable virus in the latently infected cell population that establishes in vivo, supporting the use of targeted nuclease-based approaches for an HIV-1 cure.

2019 In persons with cystic fibrosis (CF), decreased airway microbial diversity is associated with lower lung function. Conflicting data exist on the impact of short-term antibiotics for treatment of acute pulmonary exacerbations. However, whether differences in antibiotic exposure impacts airway microbiome changes has not been studied. We hypothesized that subtherapeutic beta-lactam antibiotic exposure, determined by the pharmacokinetics and pharmacodynamics (PK/PD) after intravenous (IV) antibiotic administration, would be associated with different patterns of changes in CF airway microbial diversity. Eligible children were enrolled when well; study assessments were performed around the time of pulmonary exacerbation. Plasma drug concentrations and bacterial minimum inhibitory concentrations (MICs) were used to determine therapeutic versus subtherapeutic beta-lactam antibiotic exposure. Respiratory samples were collected from children, and extracted bacterial DNA was amplified for the V4 region of the 16S rRNA gene. Twenty children experienced 31 APEs during the study; 45% (n = 14) of antibiotic courses were deemed therapeutic. Those in the therapeutic group had more significant decreases in alpha diversity at end of treatment and post-recovery compared to baseline than those in the subtherapeutic group. Therapeutic and subtherapeutic beta-lactam use is associated with different patterns of changes in CF airway microbial diversity following antibiotic administration.