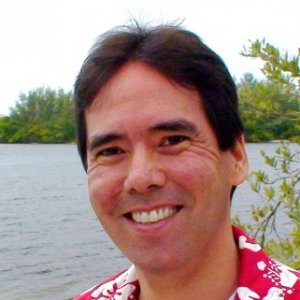 
Stephen Kajiura researches the integration of sensory biology and behavior with functional morphology. 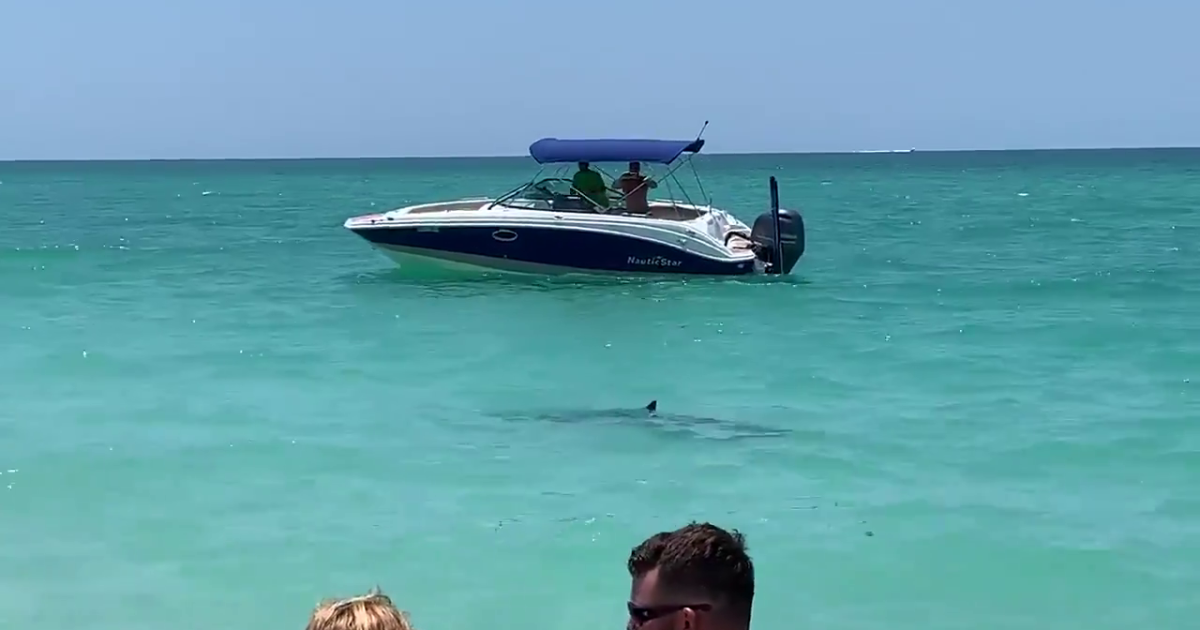 Sawfish and hammerheads – we’ve got shark sightings and here’s what you need to know! 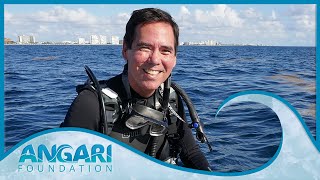 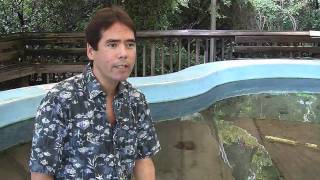 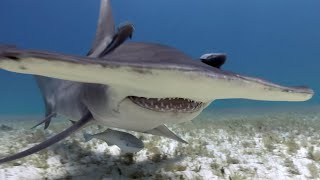 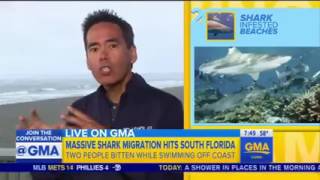 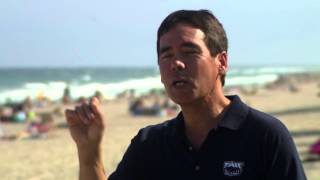 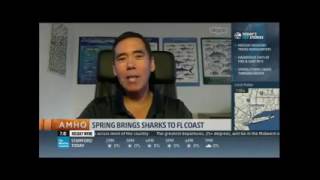 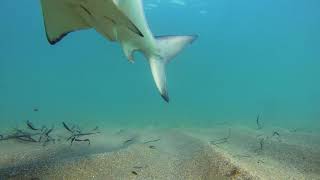 Stephen Kajiura's lab is primarily interested in the integration of sensory biology and behavior with functional morphology. He employs behavioral assays, field observations, and comparative morphology to test hypotheses about the evolution of biological structures. He has concentrated primarily on the elasmobranch fishes, which provide an opportunity to investigate various sensory modalities among closely related but morphologically dissimilar species. Also, he maintains an active research program studying the annual blacktip shark migration. This work incorporates aerial surveys, transmitter instrumentation, and field observations.

Dr. Stephen Kajiura, a researcher at Florida Atlantic University, has been tracking the migration patterns of these apex predators by air and sea. Now Kajiura's latest tool is providing thorough details about their every move.

"We welcome blacktip sharks back to South Florida because they are critically important to our ecosystem," said Stephen Kajiura, a professor of biological sciences at FAU in a report on the FAU website. "They sweep through the waters and ‘spring clean’ as they weed out weak and sick fish, helping to preserve coral reefs and sea grasses."

Number of shark bites dropped last year, both in Florida and worldwide

The blacktips migrate back and forth along the Atlantic coast, from Virginia and the Carolinas to Florida each year. Stephen M. Kajiura, a scientist at Florida Atlantic University, has spent the past decade keeping tabs on that migration when it reaches Florida...

Stephen Kajiura, an internationally renowned shark researcher at Florida Atlantic University in Boca Raton, has received a $117,501 gift from the Leon H. Charney Foundation, Inc. for a joint program with the University of Haifa in Israel to study sharks in the Eastern Mediterranean Sea...

2018 The Deepwater Horizon oil spill was the largest accidental marine oil spill in history, releasing nearly 5 million barrels of crude oil. Crude oil causes both lethal and sublethal effects on marine organisms, and sensory systems have the potential to be strongly affected. Marine fishes rely upon the effective functioning of their sensory systems for detection of prey, mates, and predators. However, despite the obvious importance of sensory systems, the impact of crude oil exposure upon sensory function remains largely unexplored. Here we show that olfactory organ responses to amino acids are significantly depressed in oil exposed stingrays. We found that the response magnitude of the electro-olfactogram (EOG) to 1 mM amino acids decreased by an average of 45.8% after 48 h of exposure to an oil concentration replicating that measured in coastal areas. Additionally, in oil exposed individuals, the EOG response onset was significantly slower, and the clearing time was protracted. This study is the first to employ an electrophysiological assay to demonstrate crude oil impairment of the olfactory system in a marine fish. We show that stingrays inhabiting an area impacted by an oil spill experience reduced olfactory function, which would detrimentally impact fitness, could lead to premature death, and could cause additional cascading effects through lower trophic levels.

2017 Elasmobranch fishes (sharks, skates, and rays) have been hypothesized to use the geomagnetic field as a cue for orienting and navigating across a wide range of spatial scales. Magnetoreception has been demonstrated in many invertebrate and vertebrate taxa, including elasmobranchs, but this sensory modality and the cognitive abilities of cartilaginous fishes are poorly studied. Wild caught yellow stingrays, Urobatis jamaicensis (N = 8), underwent conditioning to associate a magnetic stimulus with a food reward in order to elicit foraging behaviors. Behavioral conditioning consisted of burying magnets and non-magnetic controls at random locations within a test arena and feeding stingrays as they passed over the hidden magnets. The location of the magnets and controls was changed for each trial, and all confounding sensory cues were eliminated. The stingrays learned to discriminate the magnetic stimuli within a mean of 12.6 ± 0.7 SE training sessions of four trials per session. Memory probes were conducted at intervals between 90 and 180 days post-learning criterion, and six of eight stingrays completed the probes with a ≥75% success rate and minimum latency to complete the task. These results show the fastest rate of learning and longest memory window for any batoid (skate or ray) to date. This study demonstrates that yellow stingrays, and possibly other elasmobranchs, can use a magnetic stimulus as a geographic marker for the location of resources and is an important step toward understanding whether these fishes use geomagnetic cues during spatial navigation tasks in the natural environment.

2017 A new species of lanternshark, Etmopterus lailae (Squaliformes: Etmopteridae), is described from the Northwestern Hawaiian Islands, in the central North Pacific Ocean. The new species resembles other members of the “Etmopterus lucifer” clade in having linear rows of dermal denticles, and most closely resembles E. lucifer from Japan. The new species occurs along insular slopes around seamounts at depths between 314–384 m. It can be distinguished from other members of the E. lucifer clade by a combination of characteristics, including a longer anterior flank marking branch, arrangement of dermal denticles on the ventral snout surface and body, flank and caudal markings, and meristic counts including number of spiral valve turns, and precaudal vertebrate. A key to species of the Etmopterus lucifer-clade is included.

2017 Pulse fishing may pose a promising alternative for diminishing the ecosystem effects of beam trawling. However, concerns about the impact on both target and non-target species still remain, amongst others the possible damage to the electro-receptor organs, the Ampullae of Lorenzini, of elasmobranchs. The current study aimed to examine the role of pulsed direct current (PDC) used in pulse trawls on the electro-detection ability of the small-spotted catshark, Scyliorhinus canicula. The electroresponse of the sharks to an artificially created prey-simulating electrical field was tested before and after exposure to the pulsed electrical field used to catch flatfish and shrimp. No statistically significant differences were noted between control and exposed animals, both in terms of the number of sharks exhibiting an electroresponse prior to and following exposure as well as regarding the timing between onset of searching …

2016 Southeast Florida witnesses an enormous seasonal influx of upper trophic level marine predators each year as massive aggregations of migrating blacktip sharks (Carcharhinus limbatus) overwinter in nearshore waters. The narrow shelf and close proximity of the Gulf Stream current to the Palm Beach County shoreline drive tens of thousands of sharks to the shallow, coastal environment. This natural bottleneck provides a unique opportunity to estimate relative abundance. Over a four year period from 2011–2014, an aerial survey was flown approximately biweekly along the length of Palm Beach County. A high definition video camera and digital still camera mounted out of the airplane window provided a continuous record of the belt transect which extended 200 m seaward from the shoreline between Boca Raton Inlet and Jupiter Inlet. The number of sharks within the survey transect was directly counted from the video. Shark abundance peaked in the winter (January-March) with a maximum in 2011 of 12,128 individuals counted within the 75.6 km-2 belt transect. This resulted in a maximum density of 803.2 sharks km-2. By the late spring (April-May), shark abundance had sharply declined to 1.1% of its peak, where it remained until spiking again in January of the following year. Shark abundance was inversely correlated with water temperature and large numbers of sharks were found only when water temperatures were less than 25°C. Shark abundance was also correlated with day of the year but not with barometric pressure.