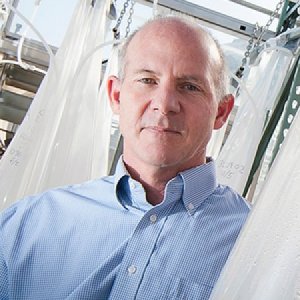 
Stephen Mayfield's research analyses the structures and proteins in algae. 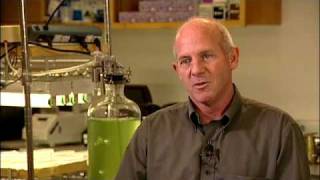 Mayfield is director of the California Center for Algae Biotechnology (Cal-CAB), director of Food & Fuel for the 21st Century (FF21), and professor of molecular biology at UC San Diego. His research focuses on the molecular genetics of green algae, algae as food and feed and renewable polymers from algae including surfboards and flip flops. He also studies recombinant production of therapeutic proteins and biofuel molecules using algae as a production platform. First to achieve transformation of the C. reinhardtii nuclear genome, Mayfield's work allowed this algae to become the dominant genetic organisms for studying photosynthesis and gene function. Mayfield's lab identified mechanisms of chloroplast gene expression allowing for development of recombinant protein expression in algal chloroplast, and was first to show high levels of recombinant protein expression in algae. He is the principal investigator for the DOE funded Center for Algae Biotechnology Commercialization (CAB-Comm) and CEC funded California Initiative for Large Molecule Sustainable Fuels (CILMSF). Mayfield was also a scientific founder of Rincon Pharmaceutical, Sapphire Energy and Triton Algae Innovations, and is the head of Sapphire’s Scientific Advisory Board and the Chief Science Officer at Triton.

LEGO ditches oil-based plastics for some of its toys, will use plants instead

Stephen Mayfield, a molecular biologist at UC San Diego and director of the California Center for Algae Biotechnology, said the company's move is a step in the right direction. "You’ll find haters, but it's way better than petroleum — so these people should be applauded for doing this," Mayfield said of sugarcane-based plastics. He has no affiliation with LEGO. Switching from oil-based to plant-based plastics dramatically cuts the carbon footprint of a product by around 70 percent, Mayfield said. "The more we can go to biological sources, the better it is," he said.

“Our goal is to get to 100 percent renewable, and 100 percent biodegradable,” said Mayfield, who is an environmentally conscious surfer and coastal enthusiast. “Burkart’s convinced that we’re going to throw these [flip-flops] in a compost pile, and in six months they’ll be gone. But we’re not there yet.” About half of the material used to make the current prototype is renewable, Mayfield said. But it will take time to assess how biodegradable the flip flops are in the environment. Some UC San Diego students who worked on the R&D are also working at Algenesis. “It’s an opportunity to teach the grad students how to start a company,” Mayfield said. “The undergrads are just on fire for this project.”

"Just as agricultural experts for decades have used targeted genetic engineering to produce robust food crops that provide human food security, this study is the first step to demonstrate that we can do the same with genetically engineered algae," said Stephen Mayfield, a professor of biology and an algae geneticist at UC San Diego. Under the EPA's purview over a 50-day experiment, the scientists cultured strains of the algae species Acutodesmus dimorphus—genetically engineered with genes for fatty acid biosynthesis and green fluorescent protein expression—in parallel with non-engineered algal species. Testing both algae strains in water samples taken from five regional lakes showed strikingly similar levels of growth in the tests, and that the genetic modification did not change the impact of the cultivated strains on native algae communities.

2018 Osteopontin (OPN) is a structural protein with potential value in therapeutic and diagnostic applications. Low titer, acidic isoelectric point, and the lack of well‐defined secondary and tertiary structure were some of the challenges that complicated purification development of OPN from recombinant Escherichia coli lysates. Reported processes for OPN recovery from recombinant sources use nonorthogonal unit operations and often suffer from low yield. In this work, we expanded the search for an optimal OPN purification method by including mixed‐modal resins with both ionic and hydrophobic properties (Capto adhere, HEA HyperCel, and PPA HyperCel). Plate‐based high‐throughput screening (HTS) platform revealed useful information about the interactions between the three different ligands and OPN as function of pH and ionic strength. The HTS data allowed the selection of OPN adsorption and elution conditions that were tested and optimized in a batch mode. In terms of purification factor and yield, HEA HyperCel performed significantly better than the other two mixed‐modal resins. Pairing HEA HyperCel with a strong anion exchange step (Capto Q) resulted in a two‐step purification process that achieved 45‐fold purification of OPN with a final purity of 95% and 44% overall yield. The orthogonality provided by mixed‐modal and ion exchange steps resulted in higher yield in fewer unit operations than reported processes.

2018 The green algae Chlamydomonas reinhardtii is a model organism that has been proposed as a potential production platform for high-value recombinant products, but to date, there has been little development of a commercially viable cultivation process. Here we demonstrate a novel mixotrophic fed-batch cultivation strategy in which average biomass density, productivity, and total amount of recombinant GFP significantly increases. Systematic feeding of acetic acid and nutrients into a bioreactor resulted in culture densities increasing from an initial 0.45 ± 0.03 to 23.69 ± 0.5 g L−1 AFDW after 168 h at an average productivity of 181.01 ± 8.8 mg L−1 h−1, a 10-fold increase in comparison to traditional batch cultures. GFP expression was low under both conditions, but fed-batch cultivation resulted in a 2.5-fold increase in total GFP upon culture termination. The effect of fed-batch cultivation on lipid composition and primary metabolites was investigated and elevated levels of the osmoregulatory molecules proline and glycerol were found, suggesting that salt accumulation may have increased over time in fed-batch cultures and eventually limited growth.

2018 In the green alga Chlamydomonas reinhardtii, introduced DNA fragments predominantly insert randomly into the nuclear genome by non-homologous recombination (NHR), often resulting in highly variable phenotypes between transformants. Homologous recombination (HR) can occur in C. reinhardtii but at very low frequency, and is often accompanied by insertions, deletions, and/or rearrangements at the recombination site. To benchmark the frequency and characterize the nature of HR integrations in C. reinhardtii, we developed a system for detecting and characterizing HR events that includes three intact markers and one split marker as well a novel design element: utilizing a long intron as the homology region. In this study we demonstrate that this system meets the following criteria: accommodates high-throughput screening; provides a high-fidelity phenotype for detecting HR without false positives from reversion or locus heterogeneity; allows and captures both single- and double-crossover HR events; reports HR and NHR rates from a single transformation; and allows characterization of imprecise recombination or rearrangement at the integration site. Using this system we reproducibly determined the HR rate in our recipient strain of C. reinhardtii and characterized a number of recombinants by restriction digests and sequencing of PCR amplified recombination junctions to show that both double and single crossover events were recovered and that integration occurred both via perfect and imperfect (i.e. accompanied by insertions, deletions, and rearrangements) HR. This system is valuable for systematically testing approaches for increasing HR efficiency and accuracy.

2018 Correct folding and post-translational modifications are vital for therapeutic proteins to elicit their biological functions. Osteopontin (OPN), a bone regenerative protein present in a range of mammalian cells, is an acidic phosphoprotein with multiple potential phosphorylation sites. In this study, the ability of unicellular microalgae, Chlamydomonas reinhardtii, to produce phosphorylated recombinant OPN in its chloroplast is investigated. This study further explores the impact of phosphorylation and expression from a “plant-like” algae on separation of OPN. Chromatography resins ceramic hydroxyapatite (CHT) and Gallium-immobilized metal affinity chromatography (Ga-IMAC) were assessed for their binding specificity to phosphoproteins. Non-phosphorylated recombinant OPN expressed in E. coli was used to compare the specificity of interaction of the resins to phosphorylated OPN. We observed that CHT binds OPN by multimodal interactions and was better able to distinguish phosphorylated proteins in the presence of 250 mM NaCl. Ga-IMAC interaction with OPN was not selective to phosphorylation, irrespective of salt, as the resin bound OPN from both algal and bacterial sources. Anion exchange chromatography proved an efficient capture method to partially separate major phosphorylated host cell protein impurities such as Rubisco from OPN.

2018 Efficient protein secretion is a desirable trait for any recombinant protein expression system, together with simple, low-cost, and defined media, such as the typical media used for photosynthetic cultures of microalgae. However, low titers of secreted heterologous proteins are usually obtained, even with the most extensively studied microalga Chlamydomonas reinhardtii, preventing their industrial application. In this study, we aimed to expand and evaluate secretory signal peptides (SP) for heterologous protein secretion in C. reinhardtii by comparing previously described SP with untested sequences. We compared the SPs from arylsulfatase 1 and carbonic anhydrase 1, with those of untried SPs from binding protein 1, an ice-binding protein, and six sequences identified in silico. We identified over 2000 unique SPs using the SignalP 4.0 software. mCherry fluorescence was used to compare the protein secretion of up to 96 colonies for each construct, non-secretion construct, and parental wild-type cc1690 cells. Supernatant fluorescence varied according to the SP used, with a 10-fold difference observed between the highest and lowest secretors. Moreover, two SPs identified in silico secreted the highest amount of mCherry. Our results demonstrate that the SP should be carefully selected and that efficient sequences can be coded in the C. reinhardtii genome. The SPs described here expand the portfolio available for research on heterologous protein secretion and for biomanufacturing applications.