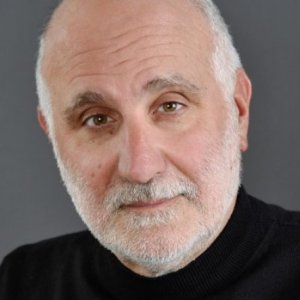 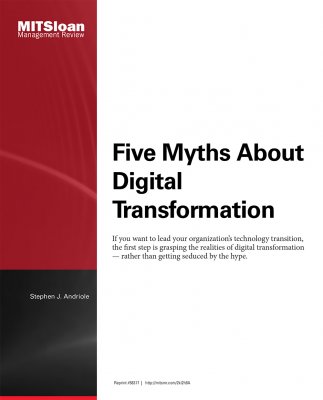 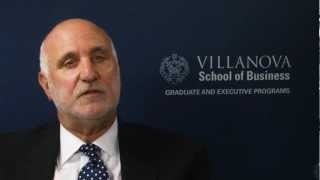 Dr. Steve Andriole is a go-to media source for all things related to the future of technology and business. He teaches strategic technology, innovation and entrepreneurialism at Villanova School of Business and his areas of expertise include cloud computing, social media, emerging technology trends, virtual and augmented reality, and business technology strategy. Dr. Andriole also serves as an industry and government consultant on all aspects of digital technology and can speak in-depth about the development, application and management of information technology, as well as digital transformation and the adoption of emerging technologies. He is former Director of Cybernetics Technology at the Defense Advanced Research Projects Agency (DARPA) and founded and co-founded several technology companies.

Dr. Andriole is a prolific author and has published 35 books and more than 500 articles, monographs, reports and book chapters. Dr. Andriole frequently presents the results of his research at academic and industry conferences and symposia; he also frequently speaks at corporate events, off-sites and strategic planning sessions on technology management, technology trends and digital transformation.

The 20 Most Popular MIT Sloan Management Review articles of 2017

US Department of Defense

By IT-Business by CIO Insight Magazine

Afghanistan was not the US’s longest war. Not even close. We’ve been at cyberwar for half a century – and we’re losing. Globally, the US is losing, and the homeland is far from safe. Hell, why not just hack a municipality for a few hundred k? It’s easy. There’s no cybersecurity strategy good enough to win a cyberwar. Sure, everyone talks a good game, but the very structure of American (and other businesses around the globe) makes it nearly impossible to, for example, deliberately and significantly reduce EBITDA to prepare for cyber warfare. It’s Sometimes Horrible to Be Right I predicted this: “The number of severity of cyberattacks will explode in 2020. Cyberwarfare has now leveled the playing field in industry, in government, and in national defense: why spend ten or fifteen billion dollars on an aircraft carrier when you can disable it digitally? Why spend billions on new product R&D when you can hack into your competition’s strategic plans? Why not just phish around municipalities for a quick $100K? Cyberwarfare is a cost-effective solution to all sorts of problems – and opportunities: cyberwarfare is a revenue stream, a new business model, digital transformation with its own unique flavor … but regardless of inexplicably unheeded warnings, (it’s) much worse than it’s ever been. Why? Simply because it’s the cheapest, easiest, fastest and most effective form of warfare we’ve ever seen, and because cyberwarfare defenses are more vulnerable than they’ve ever been.” ... I am the Thomas G. Labrecque Professor of Business Technology in the Villanova School of Business at Villanova University where I teach strategic technology, innovation and entrepreneurialism.

Amazon after Bezos, and Bezos after Amazon. "What took him so long?"

Jeff Bezos announced he will be stepping down as the CEO of Amazon, the company he founded, later this year. He'll transition to the role of executive chairman of Amazon’s board. He will be replaced as CEO by Andy Jassy, who has been leading the Amazon Web Services cloud team. Amazon of course is a massive, hugely powerful and influential company which has made itself a daily part of life for millions of Americans. So what does this change mean for the company and Bezos going forward? Dr. Stephen Andriole, the Thomas G. Labrecque Professor of Business Technology at the Villanova School of Business joins KYW Newsradio In Depth to break down the impact of the CEO change at one of the most important companies ever, and what's in store for Bezos after he exits the trenches. Learn more about your ad choices.

Joe Biden is now the 46th President of the United States. His plate is overflowing with problems and – depending on one’s level of optimism – opportunities. Obvious problems aside – Covid-19, the economy, social, economic and political divisions, insurrection and eroding international influence, just to name a few – there are also some digital technology challenges he faces, especially after the last administration’s inability to adequately enable digital technology on behalf of all Americans and restrict foreign-born scientists, engineers and technologists from practicing their professions in the US. I wrote about this before – several times. But now there are real possibilities with the new Biden Administration. What appears below is a strategic agenda for the 21st century organized around some real corporate vested interests.

Why Crisis Managers Fail & Why Preparation Is A Myth

1,263 views | Jan 19, 2021 Why Crisis Managers Fail & Why Preparation Is A Myth We now know that the global response to the pandemic was botched. But how about corporations? Were they prepared for the pandemic or the abrupt shift in the marketplace that occurred in 2020? Were their contingency plans effective? Or did they just "react"? Seems very few companies actually plan.

As the US awaits an outcome to its election, the two candidates’ approaches on science and technology couldn’t be further apart. Former vice president Joe Biden’s plan leans heavily on overhauling the nation’s energy system in an almost-$2 trillion climate change push; his rival, president Donald Trump, is a climate change sceptic and more interested in big tech milestones, like “winning the race on 5G” telecommunications. In his 11th-hour pitch to voters, Biden accused Trump of not taking the necessary steps to control the COVID-19 pandemic, which has claimed more than 230,000 American lives. Meanwhile, Trump promised to make the pandemic an afterthought. “On November fourth you won't hear about COVID anymore,” he told supporters.

No one asked Mark Zuckerberg about facial recognition when he visited the US Congress on April 10. He offered it as part of his response to questions about privacy when he said Facebook users should give “affirmative consent”when it comes to “technologies like facial recognition.”

Fighting iPhone Addiction Among Kids: Is It Apple’s Responsibility?

The launch of Bumble Bizz is coming at an opportune time - with growing awareness of women's issues in the workplace, and ongoing problems with compensation inequality and health benefits coverages now receiving renewed attention, according to Stephen Andriole, professor of business, accountancy and information systems in the Villanova School of Business. Pennsylvania ranks low in the United States in terms of women's economic and social well-being, according to a study by WalletHub. Bumble Bizz can boost the rankings by "connecting more women to an otherwise healthy economic climate within and beyond Philadelphia," Andriole said.

"Except for Google Cardboard (GOOG, GOOGL), it's way too expensive – today," says Steve Andriole, a business technology professor at Villanova School of Business in the Philadelphia area. "But within a few years, VR will be as affordable as smartphones, or cheaper. We can expect VR headgear to dramatically shrink in size and price, and eventually be embedded in fashion eyewear."

Chiu and other educators say they know of no other school with a similar fundraising scheme. Few, if any other schools, have that sort of advantage, said Stephen Andriole, a professor of business, accountancy and information systems at the Villanova School of Business in Pennsylvania. “The only way to do this is through a personal relationship,” he said. “The probability of success is quite low.”

Implement First, Ask Questions Later (or Not at All)

What Executives Should Know About Technology Trends

The Death of Big Software