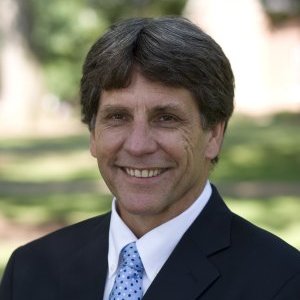 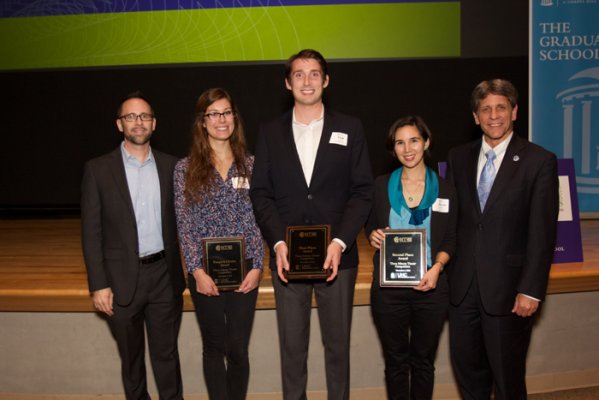 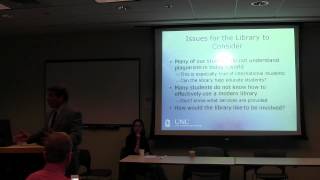 Steve Matson has served as dean of The Graduate School since 2008. He joined the UNC-Chapel Hill faculty in 1983.

Matson also is a professor in the Department of Biology in the College of Arts and Sciences, where he served as chair from 2002 to 2008. A biochemist by training, his research focuses on DNA repair, conjugative DNA transfer and the enzymatic mechanisms and biological roles of DNA helicases.

A recognized leader in the administration of graduate education, Matson is president elect of the North Carolina Council of Graduate Schools and chair elect of the Graduate Record Exam (GRE) Board.

As dean of The Graduate School, he has led interdisciplinary efforts focused on extending critical support to graduate students, including creation of a Summer Research Fellowship program focused on academic areas where summer funding is limited and creation of the Richard Bland Fellowship Professional Pathways Program, for student internships that explore specific non-faculty career paths.

Matson and his graduate dean colleagues across North Carolina implemented Graduate Education Day at the Capitol in 2011.

A native of Coos Bay, Ore., Matson earned a bachelor's degree in mathematics from Colgate University. His master's and doctoral degrees are from the University of Rochester, both in biochemistry.

The award was established to recognize excellence in inspirational teaching of undergraduate students, particularly first- and second-year students.

The North Carolina Council of Graduate Schools includes 22 campuses and offers more than 800 master's, doctoral and first professional degree programs in a wide variety of fields, including degrees in high-need areas such as education, social work, engineering, nursing, biomedical and pharmaceutical fields, among others,

Past Member, Council of Graduate Schools Board of Directors (professional)

The purpose of the TOEFL Board is to advise the Educational Testing Service (ETS) on the policies related to the TOEFL program and to provide insights on trends in international higher education. The TOEFL test is an English-language test recognized by more than 9,000 colleges, universities and agencies in more than 130 countries, including Australia, Canada, the U.K. and the United States.

“Students, during their academic training, learn how to communicate with an academic audience,” said Steve Matson, dean of The Graduate School. “However, they do not frequently have a chance to share their work with a general audience in a way that captures the importance of their work and its relevance to the world today. We’re pleased that the audience at this competition will determine one of our campus winners.”...

“Carolina’s newest graduate students join a strong, collaborative community that is dedicated to helping them become leaders in their fields,” said Steve Matson, dean of The Graduate School. “While pursuing their degrees, graduate students work side-by-side with their faculty mentors to create discoveries that help people and communities in North Carolina and beyond. They lead outreach efforts in local communities and are excellent role models for undergraduates. We value graduate students’ ideas and their enthusiasm for creating valuable new knowledge.”...

The Future Faculty Fellowship Program (FFFP) is a semester-long program that introduces graduate students to evidence-based teaching practices, helps them understand the roles and responsibilities of faculty members at different types of institutions of higher education and helps them reflect on their professional goals.

1999 Helicases play essential roles in nearly all DNA metabolic transactions and have been implicated in a variety of human genetic disorders. A hallmark of these enzymes is the existence of a set of highly conserved amino acid sequences termed thehelicase motifs' ...

DNA helicases: enzymes with essential roles in all aspects of DNA metabolism

1994 DNA helicases catalyze the disruption of the hydrogen bonds that hold the two strands of double-stranded DNA together. This energy-requiring unwinding reaction results in the formation of the single-stranded DNA required as a template or reaction ...

1990 The unwinding of duplex DNA is a prerequisite for DNA replication and repair, providing the single-stranded DNA (ssDNA) template for DNA polymerase to copy. Duplex DNA must also be unwound to generate the ssDNA required in recombination pathways or transferred ...

RAD3 protein of Saccharomyces cerevisiae is a DNA helicase

1987 The Saccharomyces cerevisiae RAD3 gene, which is required for cell viability and excision repair of damaged DNA, encodes an 89-kDa protein that has a single-stranded DNA-dependent ATPase activity. We now show that the RAD3 protein also possesses a ...

The UvrD helicase and its modulation by the mismatch repair protein MutL.

UvrD is a superfamily I DNA helicase with well documented roles in excision repair and methyl-directed mismatch repair (MMR) in addition to poorly understood roles in replication and recombination. The MutL protein is a homodimeric DNA-stimulated ATPase that plays a central role in MMR in Escherichia coli. This protein has been characterized as the master regulator of mismatch repair since it interacts with and modulates the activity of several other proteins involved in the mismatch repair pathway including MutS, MutH and UvrD. Here we present a brief summary of recent studies directed toward arriving at a better understanding of the interaction between MutL and UvrD, and the impact of this interaction on the activity of UvrD and its role in mismatch repair.

DNA helicases use energy derived from nucleoside 5- triphosphate hydrolysis to catalyze the separation of double stranded DNA into single-stranded intermediates for replication, recombination, and repair. Escherichia coli helicase II (UvrD) functions in methyl-directed mismatch repair, nucleotide excision repair, and homologous recombination. A previously discovered 2-amino acid substitution of residues 403 and 404 (both Asp 3 Ala) in the 2B subdomain of UvrD (uvrD303) confers an antimutator and UV-sensitive phenotype on cells expressing this allele. The purified protein exhibits a “hyperhelicase” unwinding activity in vitro. Using rapid quench, presteady state kinetic experiments we show the increased helicase activity of UvrD303 is due to an increase in the processivity of the unwinding reaction. We suggest that this mutation in the 2B subdomain results in a weakened interaction with the 1B subdomain, allowing the helicase to adopt a more open conformation. This is consistent with the idea that the 2B subdomain may have an autoregulatory role. The UvrD303 mutation may enable the helicase to unwind DNA via a “strand displacement” mechanism, which is similar to the mechanism used to processively translocate along single-stranded DNA, and the increased unwinding processivity may contribute directly to the antimutator phenotype.

Nicking by transesterification: the reaction catalysed by a relaxase

DNA relaxases play an essential role in the initiation and termination of conjugative DNA transfer. Purification and characterization of relaxases from several plasmids has revealed the reaction mechanism: relaxases nick duplex DNA in a site- and strand-specific manner by catalysing a transesterification. The product of the reaction is a nicked double-stranded DNA molecule with a sequestered 3'-OH and the relaxase covalently bound to the 5' end of the cleaved strand via a phosphotyrosyl linkage. The relaxase-catalysed transesterification is isoenergetic and reversible; a second transesterification ligates the nicked DNA. However, the covalent nucleoprotein complex is relatively long-lived, a property that is likely to be essential for its role as an intermediate in the process of conjugative DNA transfer. Subsequent unwinding of the nicked DNA intermediate is required to produce the single strand of DNA transferred to the recipient cell. This reaction is catalysed by a DNA helicase, an activity intrinsic to the relaxase protein in some, but not all, plasmid systems. The first relaxase-catalysed transesterification is essential for initiation of conjugative strand transfer, whereas the second is presumably required for termination of the process. The relaxase, in conjunction with several auxiliary proteins, forms the relaxation complex or relaxosome first described nearly 30 years ago as being associated with conjugative and mobilizable plasmids.