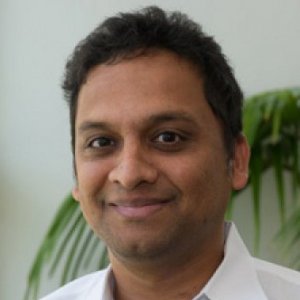 
Professor Chava is an expert in the areas of credit risk, banking and corporate finance.

Sudheer Chava received his Ph.D. from Cornell University in 2003. Prior to that he has an MBA degree from Indian Institute of Management – Bangalore and worked as a fixed income analyst at a leading investment bank in India. He has held academic positions at University of Houston and Texas A&M University before joining Georgia Tech in 2010.

Dr. Chava has taught a variety of courses at the undergraduate and master’s level including Derivatives, Risk Management, Valuation, Cases in Financial Crisis and Credit Risk Analysis. He has also taught both theoretical and empirical finance courses at the doctoral level.

Dr. Chava’s research interests are in Credit Risk, Banking and Corporate Finance. He has published extensively in all the top journals in Finance including Journal of Finance, Journal of Financial Economics, and Review of Financial Studies. His research has won a Ross award for the best paper published in Finance Research Letters in 2008, was a finalist for Brattle Prize for the best paper published in Journal of Finance in 2008 and was nominated for the Goldman Sachs award for the best paper for published in Review of Finance during 2004. Dr. Chava is the recipient of multiple external research grants such as FDIC-CFR Fellowship, Morgan Stanley Research grant and Financial Service Exchange Research grant. His papers have been presented at numerous finance conferences such as AFA, WFA, EFA, FDIC and Federal Reserve Banks and at many universities in the U.S. and abroad.

His pitch runs counter to the current trends among fintechs, banks and other lenders, which are focused on making it easier for customers to sign up for accounts and obtain funding. But Sudheer Chava, director of Georgia Tech's quantitative and computational finance program, says it can be bad for consumers and businesses if customers don't have time to think about their financial health first. "Friction is good in this circumstance because it makes the customer think about if they can afford the purchase," he said in an interview. "Impulse buyers don’t have the discipline to actually go through all the information. Even if the payment plan is say only $20 a month, they might not realize they are paying a high annual percentage rate"...

2011 We provide causal evidence that adverse capital shocks to banks affect their borrowers’ performance negatively. We use an exogenous shock to the U.S. banking system during the Russian crisis of Fall 1998 to separate the effect of borrowers’ demand of credit from the supply of credit by the banks. Firms that primarily relied on banks for capital suffered larger valuation losses during this period and subsequently experienced a higher decline in their capital expenditure and profitability as compared to firms that had access to the public-debt market. Consistent with an adverse shock to the supply of credit, crisis-affected banks decreased the quantity of their lending and increased loan interest rates in the post-crisis period significantly more than the unaffected banks. Our results suggest that the global integration of the financial sector can contribute to the propagation of financial shocks from one economy to another through the banking channel.

2010 We undertake a broad-based study of the effect of managerial risk-taking incentives on corporate financial policies and show that the risk-taking incentives of chief executive officers (CEOs) and chief financial officers (CFOs) significantly influence their firms’ financial policies. In particular, we find that CEOs’ risk-decreasing (-increasing) incentives are associated with lower (higher) leverage and higher (lower) cash balances. CFOs’ risk-decreasing (-increasing) incentives are associated with safer (riskier) debt-maturity choices and higher (lower) earnings-smoothing through accounting accruals. We exploit the stock option expensing regulation of 2004 to establish a causal link between managerial incentives and corporate policies. Our findings have important implications for optimal corporate compensation design.

Is Default Risk Negatively Related to Stock Returns? The Review of Financial Studies

2010 We find a positive cross-sectional relationship between expected stock returns and default risk, contrary to the negative relationship estimated by prior studies. Whereas prior studies use noisy ex post realized returns to estimate expected returns, we use ex ante estimates based on the implied cost of capital. The results suggest that investors expected higher returns for bearing default risk, but they were negatively surprised by lower-than-expected returns on high default risk stocks in the 1980s. We also extend the sample compared with prior studies and find that the evidence based on realized returns is considerably weaker in the 1952–1980 period.

How does financing impact investment? The role of debt covenants The Journal of Finance

2008 We identify a specific channel (debt covenants) and the corresponding mechanism (transfer of control rights) through which financing frictions impact corporate investment. Using a regression discontinuity design, we show that capital investment declines sharply following a financial covenant violation, when creditors use the threat of accelerating the loan to intervene in management. Further, the reduction in investment is concentrated in situations in which agency and information problems are relatively more severe, highlighting how the state‐contingent allocation of control rights can help mitigate investment distortions arising from financing frictions.

2004 This paper investigates the forecasting accuracy of bankruptcy hazard rate models for U.S. companies over the time period 1962–1999 using both yearly and monthly observation intervals. The contribution of this paper is multiple-fold. One, using an expanded bankruptcy database we validate the superior forecasting performance of Shumway's (2001) model as opposed to Altman (1968) and Zmijewski (1984). Two, we demonstrate the importance of including industry effects in hazard rate estimation. Industry groupings are shown to significantly affect both the intercept and slope coefficients in the forecasting equations. Three, we extend the hazard rate model to apply to financial firms and monthly observation intervals. Due to data limitations, most of the existing literature employs only yearly observations. We show that bankruptcy prediction is markedly improved using monthly observation intervals. Fourth, consistent with the notion of market efficiency with respect to publicly available information, we demonstrate that accounting variables add little predictive power when market variables are already included in the bankruptcy model.