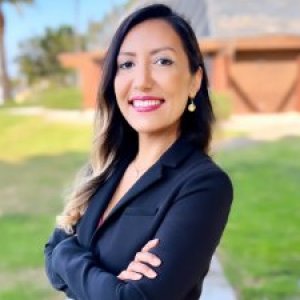 Professor Sylvia Zamora received her Ph.D. in Sociology from UCLA and a B.A. in Sociology and Latin American Studies from Smith College. She comes to LMU from the University of Chicago, where she was a Provost’s Postdoctoral Scholar in the Department of Sociology. Her research and teaching are guided by questions concerning Latino immigration and how it is changing social, political and racial dynamics in American society; she is also exploring the ongoing manifestations of African American and Latino relations in the context of major demographic shifts. Her work has been recognized with awards from the American Sociological Association Sections on International Migration, Racial and Ethnic Minorities, and Latino/a Sociology and appears in Sociology of Race and Ethnicity, Journal of Ethnic and Migration Studies, Latino Studies and the edited volume, “Just Neighbors?: Research on African American and Latino Relations in the United States.” Her recently published book, Racial Baggage: Mexican Immigrants and Race Across the Border (Stanford University Press, July 2022), is a multi-site project in México and the U.S. that examines how racial ideologies ‘travel’ with migrants across borders, illustrating how racialization is a transnational process that not only changes immigrants themselves, but also everyday understandings of race and racism in home and host countries.

Where To Start on the Border? Perspectives on U.S. Immigration  LMU Ahmanson Auditorium

Center for the Study of Los Angeles

The Borchard Foundation Center on Law & Aging underwrites an Academic Research Grant Program to further scholarship about new or improved public policies, laws and/or programs that will enhance the quality of life for older adults. Each grant recipient is required to publish a scholarly article on their research in an academic journal. Applicants are encouraged to disseminate research findings through additional channels such as conferences, stakeholder meetings, and white papers.

The Politics of Latino Identity: From Hispanic to Latinx

Race and Ethnicity in Latin America

Journal of Ethnic and Migration Studies

While some scholars contend that immigrant integration is predicated on a strategic distancing from Blacks and closeness to Whites, others argue that highly racialised immigrants share more commonality with Black Americans than Whites. Drawing on in-depth interviews with Mexican immigrant newcomers to Los Angeles, California, this article examines how immigrants make sense of their position in U.S. socioracial hierarchy vis-à-vis other racialised groups. I show that as immigrants navigate U.S. social, racial, and political landscapes, they come to view ‘American-ness’ and the citizenship status inherent in it as a key marker of distinction between themselves and those they deem ‘American’. Immigrants thus view their group status as an inferior one relative not only to the dominant White group, but also to Black Americans, albeit for qualitatively different reasons. Findings highlight how the vulnerability of ‘illegality’ not only reinforces existing social boundaries with Whites, but also shapes the nature of socioracial boundaries with Black Americans that can hinder the potential for racial solidarity and has broader implications for the U.S. socioracial hierarchy.

Racial Remittances: The Effect of Migration on Racial Ideologies in Mexico and the U.S.

Abstract Sociology of Race and Ethnicity 1–16 © American Sociological Association 2016 DOI: 10.1177/2332649215621925 sre.sagepub.com Recent research has examined how racial ideologies vary across national contexts, but relatively few scholars have investigated how ideologies might be transmitted across national boundaries. The author examines how antiblack racial ideologies in the United States are circulated back to the immigrant-sending community via social ties held between U.S. immigrants and non-migrants, who have never left their home societies. Drawing on 75 in-depth interviews with Mexicans in Mexico and the United States, the author shows how immigrant perceptions of black Americans are relayed back to nonmigrants as racial remittances—the movement of racial discourses and stereotypes across national borders. Whereas recent scholarship has documented immigrants’ preference to maintain social distance from black Americans, the author’s findings challenge assumptions that these attitudes are merely a product of the U.S. assimilation process or a reflection of Latin American antiblack racism. Rather, this research suggests that these two processes interact and have consequences pertaining to how immigrants relate to black Americans upon migration to the United States. The article ends with a discussion of the findings’ implications for how new immigrants are navigating the evolving U.S. racial order.

Abstract Social movement framing is a critical element in bringing together heterogeneous groups as allies in common political struggle. Immigrant rights organizations, like other social movement groups, must construct framing strategies to mobilize potential adherents, including African Americans and other non-immigrant groups. Drawing on interview data with leaders and members of two Los Angeles grassroots multi-racial coalitions, this article examines the framing strategies and negotiations each makes as they attempt to increase Black participation in the immigrant rights movement. Findings indicate that organizers relied on two prominent rhetorical strategies: the “immigrant worker” frame centered on an immigrant work ethic, and a more encompassing social and racial “injustice” frame. Although both carried some appeal, we argue that African Americans’ perceptions of labor market competition with immigrants posed significant challenges to building sustainable coalitions. We further demonstrate how inaction and avoidance by activists inhibited potential Black participation in the movement. We conclude with some implications of our findings for the role of social movement frames in fostering new and effective alliances between African Americans and immigrants.