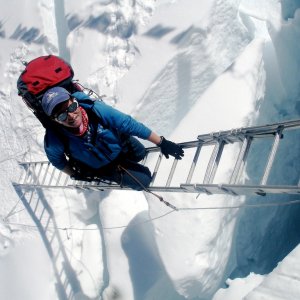 Dr. TA Loeffler brings 25 years of expertise leading people through significant life-changing experiences to every facet of her work. Her work and adventures have taken her to 36 different countries and six different continents. TA is attempting to complete “The Seven Summits,” the highest peak on all seven continents and has only two left to complete: Mount Everest and Mount Vinson.

As a Professor of Outdoor Recreation at Memorial University of Newfoundland, TA has developed a reputation for excellence in experiential education because her students are more likely to be outside chasing icebergs than sitting in a classroom. TA inspires hope, possibility, and vision in those whose lives she touches. Over the past six years, TA has shared her message of “Big Dreams, Big Goals” with over 26,000 youth in the province of Newfoundland and Labrador.

TA descending waterfall iceTA believes that we all long for a balanced, engaged, and creative life that challenges us to be the best we can possibly be. She models this belief in her life on a daily basis and combines her broad range of skills to inspire all to create the life they truly want.

Using her vast collection of outdoor adventures to create metaphors that provide new ways to see and transform the inevitable obstacles of life, TA’s multimedia presentations inform, inspire, and motivate. As an award-winning filmmaker and speaker, TA understands the power of metaphor to initiate and sustain life and professional change.

TA has received international and national recognition for her innovative teaching and inspirational speaking.

In 2008, TA was awarded a prestigious 3M National Teaching Fellowship and named as the Minnesota State University “2008 Distinguished Alumnus” in the Humanitarian category.

In 2007, TA received the Karl Rhonke Creativity Award from the Association of Experiential Education.

In 2006, The Globe and Mail named TA, “A Class Act” and she received the Association of Atlantic Universities Distinguished Teaching Award.

As well, the Canadian Association for the Advancement of Women in Sport named TA to their 2006 Top Twenty Most Influential Women in Canadian Sport and Physical Activity List.

Additionally, TA received the Memorial University Presidents Award for Distinguished Teaching in 2005 and the Association for Experiential Education named TA the Outstanding Experiential Teacher of the Year in 1999.

We all have an Everest. Each of us. Sometimes the peak is literally Mount Everest, but most times it lies deep within us, figuratively occupying a mountainous inner space. It calls us to rise up, to do what we formerly labeled as impossible, and to be who we deeply and desperately want to be. This is engagement. Leading an engaged personal and professional life allows us to become productive, energetic, and inspires those who work and live beside us. In her presentation, TA will invite you to engage with your own Everest as well as entertain and inspire with a multi-media presentation of the lessons learned from training for, reaching, and climbing the world's highest mountains.