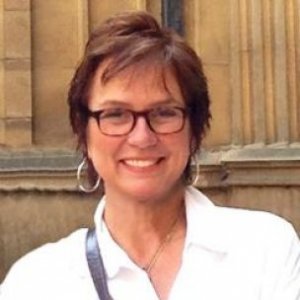 Theresia de Vroom is Professor of English, Director of the Marymount Institute for Faith, Culture and the Arts, Editor and Founder of the Marymount Institute Press. She has written articles on medieval women mystics, medieval beast epics, comparative medieval and Renaissance drama and poetry, and women writing in French and Dutch. She has edited and translated the medieval Netherlandic plays of the Hulthelm MS (1993). She was the producer of the performance piece, “Samarkand: Rites and Rituals of the Marketplace” (2008) and its subsequent dvd with Nobel Laureate, Wole Soyinka, as well as former LMU president, Robert B. Lawton, SJ, actors Danny Glover, CCH Pounder, and Michael Learned, as well as London based dance master, Peter Badejo, OBE (2012). She was the director and producer of the performance piece, “The Book, the Heart, and the Gift: Shakespeare’s First Folio at LMU, “ (2012) and the edi tor and compiler of the resulting book, In Possession of Shakespeare: Writing Into Nothing, which included essays by Wole Soyinka, McArthur Award winner, Lewis Hyde, and activist and Catholic worker, Jeff Dietrich (2012). She is the editor of more than 10 books, including those by distinguished feminist theologians, Sandra Schneiders (2013) and Elizabeth Johnson (2014) in conjunction with the Mary Milligan Endowed Lecture Series at LMU. Most recently (2014), she was the producer and editor of a cd of poems read in honor of Nelson Mandela by Wole Soyinka called: A Poet’s Guide to Mandeland. She was the first LMU professor to receive the Lois P. and Donald H. Graves Award for Excellence in Teaching. Her book, ‘The Lady Vanishes’: Fantasies of Female Heroism in Shakespeare’s Last Plays” was published 2014. Along with her LMU colleague, Michael Berg, she is currently working on a translation of two "graphic novels" written in the Japanese concentration camp where her grandfather and several of her relatives were killed during World War 2. The book will be published early 2016. She lives in Santa Monica with her husband, 5 dogs and 5 cats, and escapes to an Oxford abode for the long summer to write.

Medieval and Renaissance Drama and Poetry

Renaissance and Medieval literature with an emphasis on drama

Renaissance and Medieval literature with an emphasis on drama