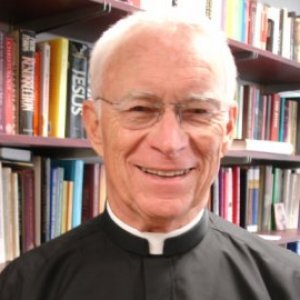 Rev. Thomas P. Rausch, S.J., Ph.D. in religion from Duke University (1976), is the Emeritus T. Marie Chilton Professor of Catholic Theology at Loyola Marymount University in Los Angeles. A specialist in the areas of Christology, ecclesiology, and ecumenism, he has published 24 books and over 300 articles and reviews. He has lectured internationally and his works have been translated into nine different languages. From 1981 to 1985 Father Rausch served as Director of Campus Ministry at LMU. In 1983-1984 he was appointed by the Secretariat for Christian Unity as Catholic Tutor to the Ecumenical Institute, the World Council of Churches study center at Bossey, Switzerland. He was rector of the Jesuit community at Loyola Marymount from 1988 to 1994 and chair of the department of Theological Studies from 1994 to 2002.

Father Rausch was a member of the U.S. Catholic/Southern Baptist Conversation 1994-2001 and one of the signatories of the Richard John Neuhaus/ Charles Colson Evangelicals and Catholics Together 1997 document, “The Gift of Salvation.” In 2001 he was appointed to the Roman Catholic/World Evangelical Alliance Consultation (2001-02) and serves on the Anglican-Roman Catholic Consultation, USA (2008-). He is co-chair of the Los Angeles Catholic-Evangelical Committee and co-chair of the Theological Commission of the Archdiocese of Los Angeles. He served as a consultor for ecumenical relations to Jesuit Father General Adolfo Nicolás (2010-15).