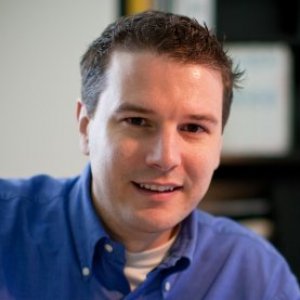 
Thonhauser sees much potential for using hydrogen to power vehicles.

Timo Thonhauser sees much potential for using hydrogen to power vehicles. Hydrogen is plentiful and every nation has access to it. It burns clean, so the only byproduct is water. And the world’s fossil fuels are running out – so we need another option.

One of the reasons why we are not using hydrogen cars already, he said, is that hydrogen is difficult to store. Simply pumping pure hydrogen into pressurized tanks in your car is inefficient and potentially dangerous. So, Thonhauser has set about to find materials with which to combine hydrogen so it is easily used and safely stored. That research is part of a prestigious CAREER Award Thonhauser has received from the National Science Foundation.

Thonhauser, a condensed matter theorist, uses computers to conduct his research and works with other scientists who then perform experiments to confirm his findings. He has conducted research at MIT, Rutgers, and Penn State. His aim is to find out how a material behaves at the smallest possible level. His research focuses on using condensed matter theory to solve currently outstanding problems in physics, biophysics, chemistry and materials science, with applications to nano-, bio- and energy-related materials. 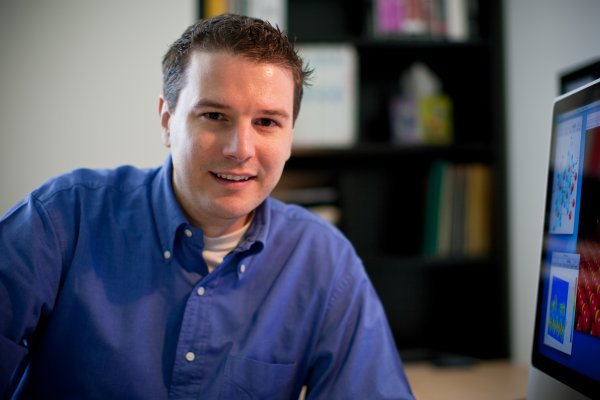 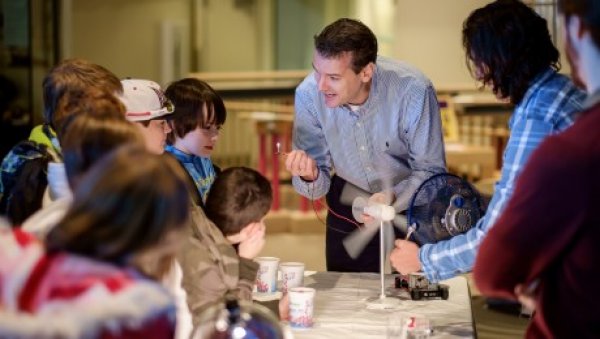 A NSF CAREER award is the most prestigious award in support of junior faculty who exemplify the role of teacher-scholars through outstanding research, excellent education and the integration of education and research within the context of the mission of their organizations.

The Reid-Doyle Prize for Excellence in Teaching is awarded to outstanding faculty members who are still in the early part of their careers.

Award for Excellence in Research (professional)

Thonhauser was awarded the Award for Excellence in Research, presented to an outstanding scholar at an early stage in his or her career.

“I became sure I wanted to major in physics my freshman year thanks to Dr. [Timo] Thonhauser’s General Physics I class,” said Thompson. “His excitement towards physics is incredibly contagious.”...

Part of Timo Thonhauser’s 2012 National Science Foundation CAREER Award, this outreach project is awarded to few junior faculty who perform exceedingly well as teacher-scholars. According to Thonhauser, awareness is a major step to promote the adoption of novel technology. At the exhibit, he demonstrated the alternative energy cart to a group of children from second, third and fourth grades, explained the issues associated with present-day fossil fuels, and the possible solutions that can be achieved by using alternative fuels such as hydrogen.

Engineering at the atomic scale

"The advantages of this stuff are mind blowing," said Timo Thonhauser, a physicist at Wake Forest University. "Gas molecules such as methane and carbon dioxide easily diffuse into MOFs, which can store them in high quantities and with unprecedented selectivity."...

Three materials could hold the key to future hydrogen cars

We develop a proper nonempirical spin-density formalism for the van der Waals density functional (vdW-DF) method. We show that this generalization, termed svdW-DF, is firmly rooted in the single-particle nature of exchange and we test it on a range of spin systems. We investigate in detail the role of spin in the nonlocal correlation driven adsorption of H2 and CO2 in the linear magnets Mn-MOF74, Fe-MOF74, Co-MOF74, and Ni-MOF74. In all cases, we find that spin plays a significant role during the adsorption process despite the general weakness of the molecular-magnetic responses. The case of CO2 adsorption in Ni-MOF74 is particularly interesting, as the inclusion of spin effects results in an increased attraction, opposite to what the diamagnetic nature of CO2 would suggest. We explain this counterintuitive result, tracking the behavior to a coincidental hybridization of the O p states with the Ni d states in the down-spin channel. More generally, by providing insight on nonlocal correlation in concert with spin effects, our nonempirical svdW-DF method opens the door for a deeper understanding of weak nonlocal magnetic interactions.

Water dissociation represents one of the most important reactions in catalysis, essential to the surface and nano sciences [e.g., Hass et al., Science, 1998, 282, 265–268; Brown et al., Science, 2001, 294, 67–69; Bikondoa et al., Nature, 2005, 5, 189–192]. However, the dissociation mechanism on most oxide surfaces is not well understood due to the experimental challenges of preparing surface structures and characterizing reaction pathways. To remedy this problem, we propose the metal organic framework MOF-74 as an ideal model system to study water reactions. Its crystalline structure is well characterized; the metal oxide node mimics surfaces with exposed cations; and it degrades in water. Combining in situ IR spectroscopy and first-principles calculations, we explored the MOF-74/water interaction as a function of vapor pressure and temperature. Here, we show that, while adsorption is reversible below the water condensation pressure (∼19.7 Torr) at room temperature, a reaction takes place at ∼150 °C even at low water vapor pressures. This important finding is unambiguously demonstrated by a clear spectroscopic signature of the direct reaction using D2O, which is not present using H2O due to strong phonon coupling. Specifically, a sharp absorption band appears at 970 cm–1 when D2O is introduced at above 150 °C, which we attribute to an O–D bending vibration on the phenolate linker. Although H2O undergoes a similar dissociation reaction, the corresponding O–H mode is too strongly coupled to MOF vibrations to detect. In contrast, the O–D mode falls in the phonon gap of the MOF and remains localized. First-principles calculations not only positively identify the O–D mode at 970 cm–1 but derive a pathway and kinetic barrier for the reaction and the final configuration: the D (H) atom is transferred to the oxygen of the linker phenolate group, producing the notable O–D absorption band at 970 cm–1, while the OD (or OH) binds to the open metal sites. This finding explains water dissociation in this case and provides insight into the long-lasting question of MOF-74 degradation. Overall, it adds to the understanding of molecular water interaction with cation-exposed surfaces to enable development of more efficient catalysts for water dissociation.

Mechanism of Preferential Adsorption of SO2 into Two Microporous Paddle Wheel Frameworks M(bdc)(ted)0.5 Chemistry of Materials

The selective adsorption of a corrosive gas, SO2, into two microporous pillared paddle-wheel frameworks M(bdc)(ted)0.5 [M = Ni, Zn; bdc =1,4-benzenedicarboxylate; ted = triethylenediamine] is studied by volumetric adsorption measurements and a combination of in situ infrared spectroscopy and ab initio density functional theory (DFT) calculations. The uptake of SO2 in M(bdc)(ted)0.5 at room temperature is quite significant, 9.97 mol/kg at 1.13 bar. The major adsorbed SO2 molecules contributing to the isotherm measurements are characterized by stretching bands at 1326 and 1144 cm–1. Theoretical calculations including van der Waals interactions (based on vdW-DF) suggest that two adsorption configurations are possible for these SO2 molecules. One geometry involves an SO2 molecule bonded through its sulfur atom to the oxygen atom of the paddle-wheel building unit and its two oxygen atoms to the C–H groups of the organic linkers by formation of hydrogen bonds. Such a configuration results in a distortion of the benzene rings, which is consistent with the experimentally observed shift of the ring deformation mode. In the other geometry, SO2 establishes hydrogen bonding with −CH2 group of the ted linker through its two oxygen atoms simultaneously. The vdW-DF-simulated frequency shifts of the SO2 stretching bands in these two configurations are similar and in good agreement with spectroscopically measured values of physisorbed SO2. In addition, the IR spectra reveal the presence of another minor species, characterized by stretching modes at 1242 and 1105 cm–1 and causing significant perturbations of MOFs vibrational modes (CHx and carboxylate groups). This species is more strongly bound, requiring a higher temperature (∼150 °C) to remove it than for the main physisorbed species. The adsorption configurations of SO2 into M(bdc)(ted)0.5 derived by infrared spectroscopy and vdW-DF calculations provide the initial understanding to develop microporous metal organic frameworks materials based on paddlewheel secondary-building units for SO2 removal in industrial processes.

Water cluster formation and methane adsorption within a hydrophobic porous metal organic framework is studied by in situ vibrational spectroscopy, adsorption isotherms, and first-principle DFT calculations (using vdW-DF). Specifically, the formation and stability of H2O clusters in the hydrophobic cavities of a fluorinated metal–organic framework (FMOF-1) is examined. Although the isotherms of water show no measurable uptake (see Yang et al. J. Am. Chem. Soc. 2011, 133, 18094), the large dipole of the water internal modes makes it possible to detect low water concentrations using IR spectroscopy in pores in the vicinity of the surface of the solid framework. The results indicate that, even in the low pressure regime (100 mTorr to 3 Torr), water molecules preferentially occupy the large cavities, in which hydrogen bonding and wall hydrophobicity foster water cluster formation. We identify the formation of pentameric water clusters at pressures lower than 3 Torr and larger clusters beyond that pressure. The binding energy of the water species to the walls is negligible, as suggested by DFT computational findings and corroborated by IR absorption data. Consequently, intermolecular hydrogen bonding dominates, enhancing water cluster stability as the size of the cluster increases. The formation of water clusters with negligible perturbation from the host may allow a quantitative comparison with experimental environmental studies on larger clusters that are in low concentrations in the atmosphere. The stability of the water clusters was studied as a function of pressure reduction and in the presence of methane gas. Methane adsorption isotherms for activated FMOF-1 attained volumetric adsorption capacities ranging from 67 V(STP)/V at 288 K and 31 bar to 133 V(STP)/V at 173 K and 5 bar, with an isosteric heat of adsorption of ca. 14 kJ/mol in the high temperature range (288–318 K). Overall, the experimental and computational data suggest high preferential uptake for methane gas relative to water vapor within FMOF-1 pores with ease of desorption and high framework stability under operative temperature and moisture conditions.

Ab initio simulations are combined with in situ infrared spectroscopy to unveil the molecular transport of H2, CO2, and H2O in the metal organic framework MOF-74-Mg. Our study uncovers—at the atomistic level—the major factors governing the transport mechanism of these small molecules. In particular, we identify four key diffusion mechanisms and calculate the corresponding diffusion barriers, which are nicely confirmed by time-resolved infrared experiments. We also answer a long-standing question about the existence of secondary adsorption sites for the guest molecules, and we show how those sites affect the macroscopic diffusion properties. Our findings are important to gain a fundamental understanding of the diffusion processes in these nanoporous materials, with direct implications for the usability of MOFs in gas sequestration and storage applications.