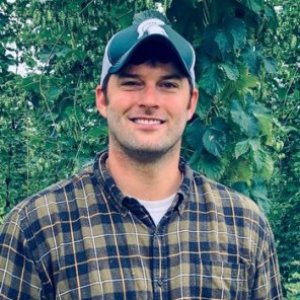 Trey Malone joined the MSU AFRE faculty in 2017 as an Assistant Professor and Extension Economist, and is appointed in the tenure system. A native of Kansas, Trey earned his undergraduate degree from Rockhurst University. He commenced his graduate education at Oklahoma State University, where his master’s thesis developed economic modeling approaches for local foods systems. Trey also interned with the Federal Reserve Bank of Kansas City during his master’s degree. Under the advisement of Jayson L. Lusk, his PhD dissertation used the American beer market to test behavioral and experimental economic principles.

Trey has won multiple research awards, including the Outstanding Poster Award of the Land, Water, and Environmental Economics Section as well as the Graduate Student Paper Competition for the Institutional and Behavioral Economics Section of the Agricultural & Applied Economics Association (AAEA). Another of his research articles was selected by the editorial board of the Journal of Entrepreneurship & Public Policy as its Outstanding Paper of 2016. He has served in multiple leadership roles, including as Chair of the Brewing & Enology Economic Research Section of AAEA and Chair of the Institutional and Behavioral Economics Section of AAEA.

Trey’s extension program is titled “Behavioral Insights for Agri-Food Supply Chains” and focuses on applying lessons from behavioral economics to increase agricultural productivity and efficiency. His extension work has been featured at events such as the Great Lakes EXPO and the Great Lakes Hops and Barley Conference. If Trey isn’t in his office, he is likely exploring Michigan while he meets with stakeholders across the state.

Texas restaurants are just trying make it through this

The dining room at Southern food restaurant Olamaie in Austin has been closed since March. Chef and owner Michael Fojtasek decided in July to focus on buttermilk biscuits and biscuit sandwiches and sell them curbside. “So it's about 180 degrees from what we've done in the past as a fine dining restaurant,” Fojtasek said. This means a lower overhead, but biscuits don't bring in as much dough. “Normally, we would be doing north of $300,000 a month in sales. And this month we'll be lucky to get to $60,000.” Trey Malone, professor of agricultural, food and resource economics at Michigan State University, said a comprehensive federal relief package for restaurants is tough because the industry is so diverse and region-specific. “The restaurant relief policy in Detroit, Michigan, just is not going to look the same as the restaurant relief package that's needed in Austin, Texas,” he said.

This Halloween, trick-or-treating could be down 41%

According to Trey Malone, report author and assistant professor of agriculture, food, and resource economics at Michigan State University’s College of Agriculture and Natural Resources, COVID-19 continues to disrupt food systems. “As we move into the holiday season, our survey suggests that COVID-19 will generate a chilling effect on the fun social activities we all traditionally enjoy during this time,” Malone says. “I would expect candy to be widely available, but fewer social events to go on as planned. One of our more surprising findings is how so many households have yet to decide exactly what they will do this year,” he says. “I’m not sure we’ve ever seen so much uncertainty in our holiday planning this close to the season.”

The food is prepared in a food truck on site. Starting next month, you'll be able to order your food online, so that the entire experience at EastEats is cashless and contact-less. Servers will wear masks, and there will be outdoor restrooms available on site also. The grand opening is coming at a time when the restaurant industry is facing a bleak winter season, economist Trey Malone told 7 Action News. “Year over year sales for each month since the pandemic has begun are down 30 to 50 percent each month for restaurants across the country," he said. One in six restaurants nationwide closed. And during the spring, patio space was key to keeping revenue flowing, both here in metro Detroit and around the country. “That window of opportunity is closing quickly," said Malone, who also teaches at Michigan State.

Q&A: Seasonal economics of food during a pandemic

Michigan State University's Trey Malone answers questions about the economics of food in the coming months and how the COVID-19 pandemic will affect typical seasonal patterns. Malone is an assistant professor of agriculture, food and resource economics in the College of Agriculture and Natural Resources.

Substitutes for traditional meat products have captured the attention of investors, the media and consumers. Plant-based meat options are showing up in grocery stores and on the menus at fast food chains like Burger King and restaurants like TGI Fridays...

Substitutes for traditional meat products have captured the attention of investors, the media and consumers. Plant-based meat options are showing up in grocery stores and on the menus at fast food chains like Burger King and restaurants like TGI Fridays...

Trump Supporters Are Actually More Likely to Avoid Gluten, According to Study

In their paper, " Gluten aversion is not limited to the political left," Dr. Trey Malone and Dr. F. Bailey Norwood investigate how a person's political opinions might relate to (or even shape) their opinions about food products. "If an avoidance of gluten is a biological condition and not a social construct, there should be no correlation between political opinions and gluten avoidance," they wrote. "Our study uncovers a complex relationship between the social construction of gluten avoidance and the potential role of political views."...

In recent years, gluten-free diets have been the subject of mockery from a certain type of American who thinks the country has gotten a little too soft. The kind of American who rolls his eyes at veganism and wears a necktie that looks like a slice of bacon. It’s the type of American embodied by Ron Swanson, Nick Offerman’s character from Parks and Recreation, whom the actor channeled in a 2015 NASCAR ad that goofed on gluten-free diets and drew an angry petition in response. How appropriate...

Stress builds as Michigan farmers are ‘hit from all directions’

Food and agriculture in Michigan is a huge industry, contributing over $101 billion to the state’s economy and employing over 900,000 workers. There are just under 48,000 farms covering roughly 9.8 million acres and producing about 300 products, making Michigan second only to California in diversity of products, said Trey Malone, an agriculture economist at Michigan State University...

Michigan State University has published a first of its kind study, published in the journal Beverages, that shows the respectable economic impact of burgeoning beer and craft beer's entire value chain on the state of Michigan. Trey Malone, MSU agricultural economist, is the study's lead author...

2018 Despite widespread use in nonmarket valuation, data quality remains an ongoing challenge for survey methods. One key concern is whether participants attentively respond to survey questions or whether they exert less than full effort. To determine the prevalence and consequences of inattention bias in surveys, we estimate how meat demand varies across people who do and do not miss trap questions. Using a split-sample design with discrete choice experiments for meat products, we explore three different trap questions to determine how many potentially inattentive respondents are identified by each method. We find that individuals who miss trap questions respond differently to the choice experiment than individuals who correctly answer the trap question. Inattention generates vastly different compensating variation estimates of a carbon tax, ranging from 3.56 cents per meal choice for the least attentive to 6.13 cents per meal choice for the most attentive.

If you brew it, who will come? Market segments in the US beer market

2018 This article uses data collected from a large number of representative United States beer drinkers to identify potential market segments through consumers' taste perceptions of various beer brands. We use several well‐established marketing research methods to show that distinctive segments of the beer market underlie aggregate demand for craft beer. Using exploratory factor analysis, we find that consumers tend to group beers by two underlying factors of taste. We then use cluster analysis to provide a description of how market segments are influenced by brand familiarity. Overall, this article highlights consumer heterogeneity in the modern U.S. beer market and provides an example of how one might use primary data to analyze segmentation in a growing but highly competitive market.

Journal of Agricultural and Applied Economics

2017 Consumers implicitly incorporate their perceptions of products into their decision processes, yet little research has explicitly focused on how those perceptions influence demand for meat. This study incorporates taste, health, and safety perceptions into a discrete choice experiment for meat products at a grocery store. Our results indicate that taste is the most important perception as a 1-unit increase in the perceived tastiness (on a −5 to +5 scale) of a food product leads to a $0.60 increase in willingness to pay, whereas equivalent increases in perceived health and safety lead to $0.31 and $0.21 increases, respectively.

Putting the Chicken Before the Egg Price: An Ex Post Analysis of California’s Battery Cage Ban

Journal of Agricultural and Resource Economics

2016 California legislation outlawed the use and sale of battery cages for egg-laying hens in 2015. While a number of ex ante studies projected the effects of the housing prohibitions, the ultimate ex post effects are unknown. Using a price series reported by the USDA, we study the movement of daily egg prices in California and the United States before and after the law’s implementation. Depending on the methods used, we find that Californians now pay between $0.48 and $1.08 more for a dozen eggs. The estimates suggest an annual reduction in California consumer surplus of between $400 million and $850 million.

2016 While previous studies have looked at the negative consequences of beer drinking often as a prelude to discussing benefits of laws that curtail consumption, the purpose of this paper is to understand the downside of such regulations insofar as reducing entrepreneurial activity in the brewing industry.